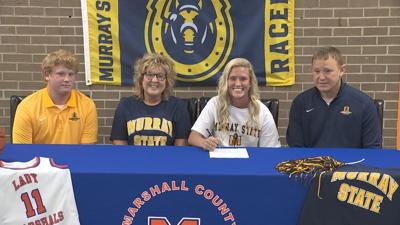 PADUCAH, KY -- Marshall County senior Cayson Conner made it official on Monday afternoon by signing her letter of intent to play college basketball with the Murray State Racers.

The signing comes just day's after Conner first committed to the Racers following a spectacular showing at this years KHSAA Girl's Sweet 16.

"It has been a crazy week," Conner said. "After I got home from the state tournament, I had a meeting with coach Turner and we talked and I am just so thankful for the opportunity and I decided to make that decision."

Conner led the Lady Marshals to a runner-up finish in this years Sweet 16, and led Marshall County in scoring this season with 14 points per game.

During the state tournament, Conner earned all-tournament honors while averaging 20 points per game.

But it was her play through the course of the 2021 season that changed her outlook on playing at the next level.

"We had talked a little bit before and I had kind of turned her down," Conner said about Murray State head coach Rechelle Turner. "But after this season I think it changed my mind a little bit and probably changed hers a little bit too."

Conner will be the 5th player from the 1st Region on the Murray State roster next season.