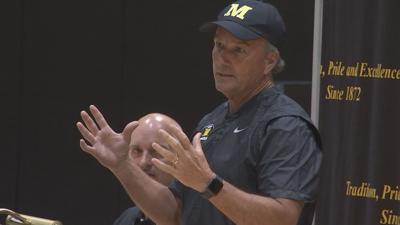 PADUCAH, KY -- Two weeks after announcing the hire of Darren Bowling as head football coach, Murray officially introduced him to the community on Monday afternoon.

Bowling was hired at the beginning of the Kentucky High School Athletic Association dead period which prohibits coaches from contacting players for two weeks.

Monday was his first chance to meet his new players as well as their parents.

"Football is a community," Bowling said about Monday's meet and greet. "It takes an army to run a football program and you have to have close nit people that love their football and love their community to be successful. Just in the time I have been here that is all I have run into."

It was also the first day of practice for the Tigers under Bowling as he begins to install his new system. It's a system that won him four state championships in his 12 years coaching at Union City.

"The main thing is that you want to see a lot of hustle from them, energy," Bowling said about his players. "You want to see excitement and you want to see people that are buying into the system. In other words, it is a system that they have to buy into to make it work. You hope that there is some excitement at the end of the day that revolves around Murray football."

The Tigers will open the 2021 season on August 20th at Crittenden County.