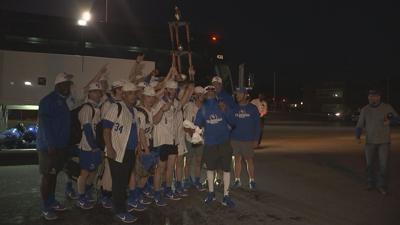 PADUCAH, KY -- It took a heroic effort in the 6th inning for the Paducah Tilghman Blue Tornado to claim the Kentucky 2A State Baseball Championship on Sunday afternoon with a 10-7 win over Christian Academy of Louisvile.

The Centurions scored 3 runs in the top of the 6th inning to take a 6-3 lead over the Blue Tornado. What Tilghman did in the bottom of the inning would lead them to a state championship.

The Blue Tornado countered that with a 7 run bottom of the 6th to regain the lead, and never looked back.

"It was just unbelievable," said Tilghman pitcher Justin West. "We got it, we got the job done. Credit to my teammates​, they did a great job making plays behind me. It was just a good weekend overall."

Paducah Tilghman used their bats as well as solid pitching to win three games over the course of the weekend to win the championship, which is the second state title in school history. The first came in the KHSAA State Championship back in 1960.

"It was awesome the way that these guys played, the way they have been playing," head coach Tremayne Donald said. "It is just a reward for all their hard work that they have been putting in for the last six or seven months. I told them, to win a championship you have got to learn to prepare for one at an early time. It was just so important that all of that extra training and stuff that we did prepared us."

With the three wins over the weekend the Blue Tornado are now 15-0, and one of just two unbeaten teams in the state.

Next up, they will host rival McCracken County on Tuesday night at Brooks Stadium.