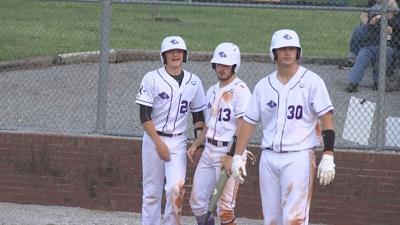 After winning their first-ever Region 2 baseball championship on Monday, then taking yesterday to try to come down off that high, today the Lyon County baseball team got back to work preparing for Saturday's semi-state showdown with Region 3 champion Owensboro Catholic.

The Lyons have had an incredible season winning 28 games in all, including their last eight in a row. Arguably, their most impressive win was back in April over Region 1 champion McCracken County.

Especially in a small school, you get a lot of kids that play multiple sports. Lyon County's basketball team was considered among the favorites to win a region title back in March, before they were upset in the region quarterfinals by Hopkinsville.

A half-dozen of those basketball players also play baseball, and many of them are key contributors to their baseball success. Lyon County Head Coach Ricky Baker said his team that basketball disappointment to help fuel them to their first-ever baseball championship.

"I know they thought about it," Baker said. "The opportunity was there in basketball. It was a heartbreaker for them. We had to go through Hopkinsville again, which we had to do in basketball, that was a little bit of motivation right there for a little payback, revenge game. We used that motivation to our benefit and it really worked out."

The Lyons will face Owensboro Catholic at 1:00pm Saturday in Bowling Green.