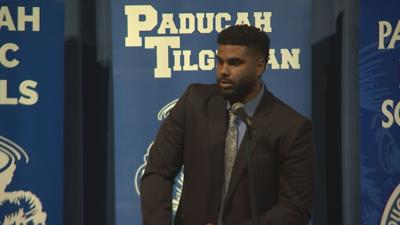 Sean Thompson has been a lifer at Crittenden County. He played his high school football with the Rockets, and eventually became the head coach at his alma mater. After seeing an opportunity he couldn't pass up at Paducah Tilghman, Friday he was introduced as the new head coach of the Blue Tornado.

Thompson went 28-8 in his three seasons as head coach at Crittenden County, winning three district championships, and he took the Rockets to the Class 1A state quarterfinals twice. Now he's stepping up to take over Class 3A Tilghman, and it's a job that if he didn't at least apply for it, he would have had regrets.

"This is one of those jobs in the state that anybody, as far as football coaches, would want to be a part of," Thompson said. "A tradition rich, winning program like this, you want to be a part of something like that. My family, they were ecstatic about it, and really, through the interview process, they made me feel really good about it, and I was at ease. My guys at Crittenden made me feel really good. They understand, so it was an easy choice in the end."