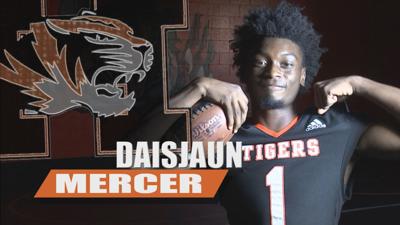 Local coaches voted Hopkinsville's Daisjaun Mercer the #3 Player of Gridiron Glory in 2021. Here's what they had to say about him:

McCracken County's Marc Clark: "I mean, he is a dude. You can put him anywhere on the field. He's dynamic. He's dynamite. Just seeing how many picks that he's had as a young kid, and how he's able to turn teams over the way that he is, he is a problematic player. You can put him anywhere. I don't care what game you're playing: football, basketball, baseball, checkers, hopscotch, it doesn't matter. He's a guy you want on your team because he's going to go get it done."

Graves County's Nick Kemp: "He's a ball-hawk. As a freshman, he had nine or ten interceptions. He's got a ton of experience. You don't see as a junior that many interceptions and that many snaps by your junior year. That kid's got all kinds of experience and he's crazy athletic."

Calloway County's Chris Champion: "I think some of the attention went to some other players last year, some of their older seniors who were getting some Power 5 looks. Honestly, I thought he was their best all-around player on both sides of the ball. He's a guy that if you're going to throw the ball in his direction, it better be on point, because he can jump out in front and take it to the house."

Caldwell County's Will Barnes: "On the defensive side of the ball the last two years, he's caused us all kinds of fits. Last year, he made a lot of good plays on offense. He had some big runs. He's the type of kid that when the ball's in his hands, it can go the distance every single time."