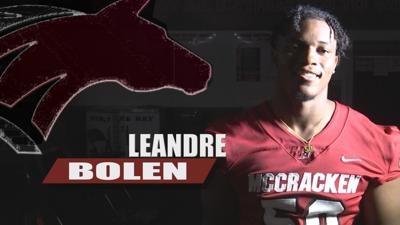 Mayfield's Joe Morris: "He disrupts everything on their defensive line. You've got to scheme against him. He's so quick off the ball. That's the biggest thing. His first couple steps off the ball are so fast. Last year against us, he had a pick six, several hurries, and sacks. He just disrupts everything. I'm sure when we call some plays and we're lined up against him, I'll be like, oh no, I've got to try to protect the quarterback."

Paducah Tilghman's Sean Thompson: "Big, fast off the end, run stopper, powerful. Just fast. He's a freakish athlete of the defensive line, and outside linebacker. That's hard to find, a defensive player that's that versatile, especially up front, that can take on an offensive lineman, or drop into pass coverage.  You have to alter what you're doing based on where he is. You've got to make sure you protect your quarterback, your running back."

Graves County's Nick Kemp: "You try to run away from him, but he's got so much speed, he can get you from the backside. You try to run at him, and he'll split a double-team. I don't think you can stop him, just slow him down a little bit, and I'm not sure that's possible either."

Marshall County's Steve Etheridge: "Very instinctive defensive lineman. Great with his hands. Good get-off. Definitely one that can play the run and the pass very well."

Tune in Tuesday night at 6:00pm as we unveil who the coaches think is the #4 Player of Gridiron Glory in 2021.