(CNN) — The United States on Wednesday surpassed 150,000 recorded COVID-19 deaths — a milestone that comes as the country's rate of daily coronavirus deaths is the highest it's been since the spring.

The country's coronavirus death toll was 150,034 as of Wednesday afternoon — more than a fifth of the world's 662,000-plus recorded deaths, according to Johns Hopkins University.

Some states are seeing their highest death tolls. California on Wednesday reported 197 COVID-related deaths in a single day, according to state Department of Public Health. That total far outpaces the previous high of 159, recorded just last week.

Nationwide, the seven-day moving average of daily deaths rose above 1,000 on Tuesday — the first time since June 2.

And in 29 states, average number of daily deaths were at least 10% higher over the previous week, according to Johns Hopkins data.

As the US hits the grim milestone, a medical education association is warning that the US could see deaths skyrocket "well into the multiple hundreds of thousands."

The Association of American Medical Colleges made that statement Wednesday as it released what it called a roadmap on how to contain the disease (a copy of the plan is available at the bottom of this story).

Disease trends in the US are mixed: Deaths are increasing and hospitalizations are at or near peak levels, though new, daily reported infections are declining slightly.

But health experts have warned the death rate likely would rise as it is now, as a lagging consequence of a large spike in cases weeks earlier especially in the South and West.

Infectious disease experts say the country is at a critical juncture, as debates about how and whether to reopen schools for in-person learning rumble on.

"It's not going to spontaneously come down," Fauci, director of the National Institute of Allergy and Infectious Diseases, said Tuesday in a call with several governors about the pandemic.

The AAMC's warning said that "if the nation does not change its course — and soon — deaths in the United States could be well into the multiple hundreds of thousands."

It did not say when this tally might be reached, or forecast the number more precisely.

It urges the Trump administration to invoke the Defense Production Act, or determine other means, to solve critical shortages in COVID-19 testing supplies and personal protective equipment; and to set targets for stockpiling supplies.

It also suggests ramping up COVID-19 testing capacity to more than 2 million a day and reducing the turnaround time for test results.

And it calls for "national standards on face coverings to stop the spread, especially by asymptomatic individuals, and make them mandatory in areas of growing community spread."

Other groups have released plans on how to end the pandemic over the past several months as states have employed a patchwork of approaches to try and mitigate the resurgent virus.

The AAMC says it represents all accredited medical schools in the United States and 17 in Canada, as well as 400 teaching hospitals.

Schools that allow students back for in-person learning this fall will likely teach the nation even more about COVID-19, Fauci said Tuesday.

With schools closed since March and April, a knowledge gap has persisted around how young children experience and spread the virus, Fauci, the United States' top infectious disease doctor, said.

"Though this may sound a little scary and harsh — I don't mean it to be that way ... you're going to be actually part of the experiment of the learning curve of what we need to know," Fauci said during a discussion with Randi Weingarten, president of the American Federation of Teachers.

"We don't know the full impact," he said.

Some schools are still deciding whether, when and how to reopen their classrooms. Researchers are only beginning to articulate how opening schools might contribute to the virus's spread.

Researchers in South Korea, for example, found that children between the ages of 10 and 19 can transmit COVID-19 within a household just as much as adults — but children ages 9 and younger transmitted the virus at much lower rates. Fauci said more research is being conducted, and much more is needed.

Although Fauci said that there is no "uni-dimensional answer" to how schools should reopen, he said that the "default position should be that we should try to the best of our ability to get the children back to school."

Fauci encouraged teachers to wear a mask, cover their eyes with either goggles or a face shield, and maybe wear gloves to help create a safe classroom. He also said he believes a vaccine could be ready by the end of the year.

Tennessee announced testing and contact-tracing measures within schools; Oregon set restrictions for schools that can allow students back; and Connecticut is investing $43.5 million in providing digital devices to help students learn remotely.

Indianapolis Public Schools' administrators said Wednesday they will recommend starting the school year with remote learning for all of its 30,000 students.

Alabama Gov. Kay Ivey said Wednesday she is encouraging her state's schools to phase into in-person instruction, and is requiring that students from second grade through college wear masks in class.

As the nation waits for a vaccine, rumors that the anti-malarial drug hydroxychloroquine can act as a treatment continue to perpetuate, including in President Donald Trump's administration.

But the drug has not been shown to be effective against coronavirus, and can even produce harmful side effects, former US Surgeon General Dr. Vivek Murthy told CNN's Wolf Blitzer on Tuesday.

"All the time that we often end up spending dispelling these myths around hydroxychloroquine is time that we are not spending working on solving the actual problem in front of us," Murthy said.

And measures already in place to combat the virus' spread could be the key to solving the problem, the US Centers of Disease Control and Prevention's Director Dr. Robert Redfield said Tuesday in an interview with ABC news.

"We have the most powerful weapon in our hands right now, I mean it's an enormously powerful weapon. It's just a simple, flimsy mask," Redfield said. "This virus can be defeated if people just wear a mask."

Numbers on the decline after face mask requirements

Although some states continue to see surges and set records in the numbers of coronavirus cases and hospitalizations, Tuesday's total of new cases across the nation stood at 61,660, slightly lower than at this point last week.

Kentucky, a state that is among the at least 41 to require masks, reported 532 new cases Tuesday and a 5.08% positivity rate, which has gone down for the first time in four days, Gov. Andy Beshear said.

"Again, too early to draw conclusions, but I hope I've said, I hope that this is us starting to see, because the time period is right, where the facial covering requirement is starting to kick in and help," Beshear added.

In Florida, where daily new cases are declining, state officials reported a record in daily deaths for a second straight day. The state Wednesday reported 216 deaths, surpassing the previous high of 186 reported a day earlier.

Download the document below to read the AAMC's 16-page plan with actions the group says will help fight the COVID-19 pandemic in the United States. 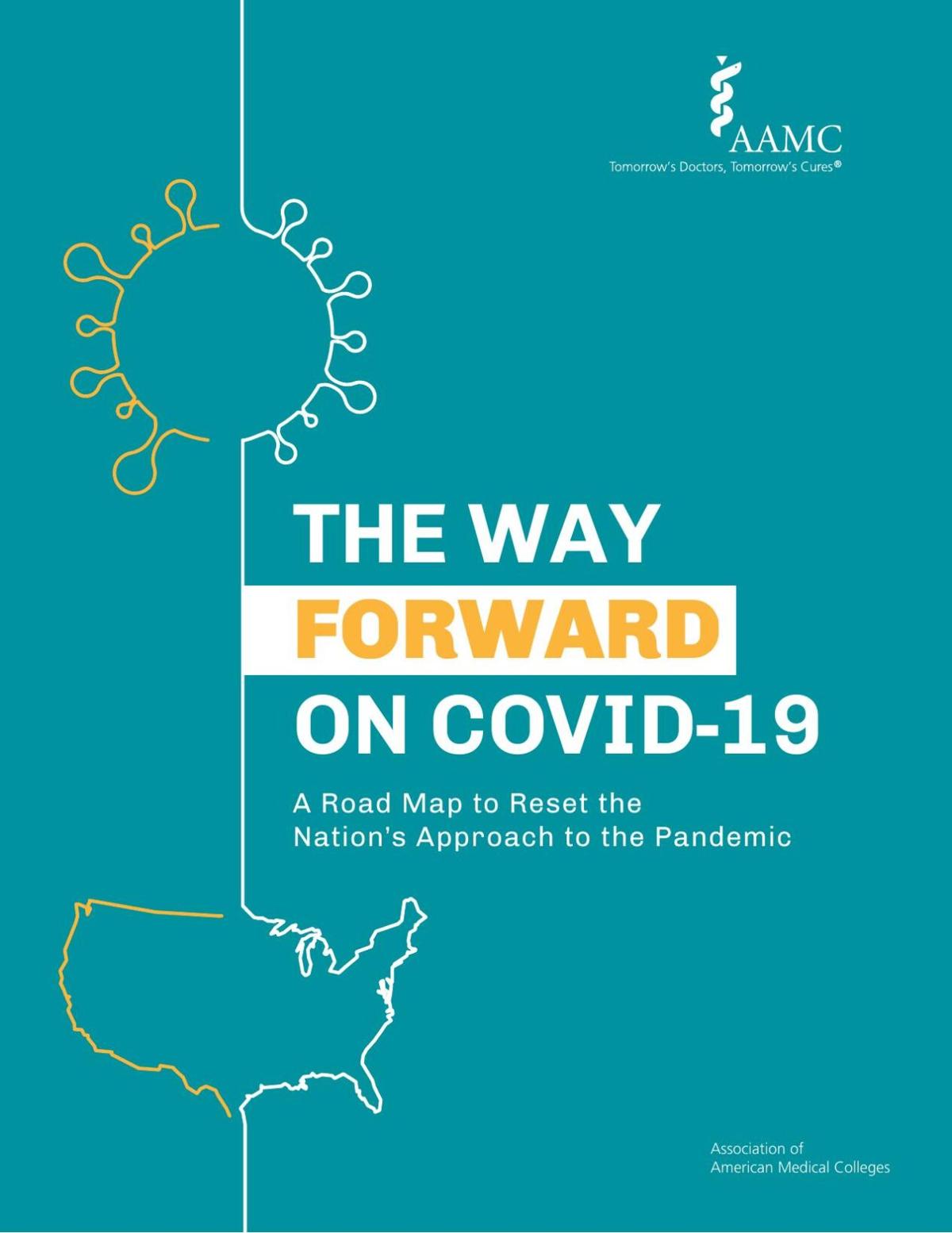