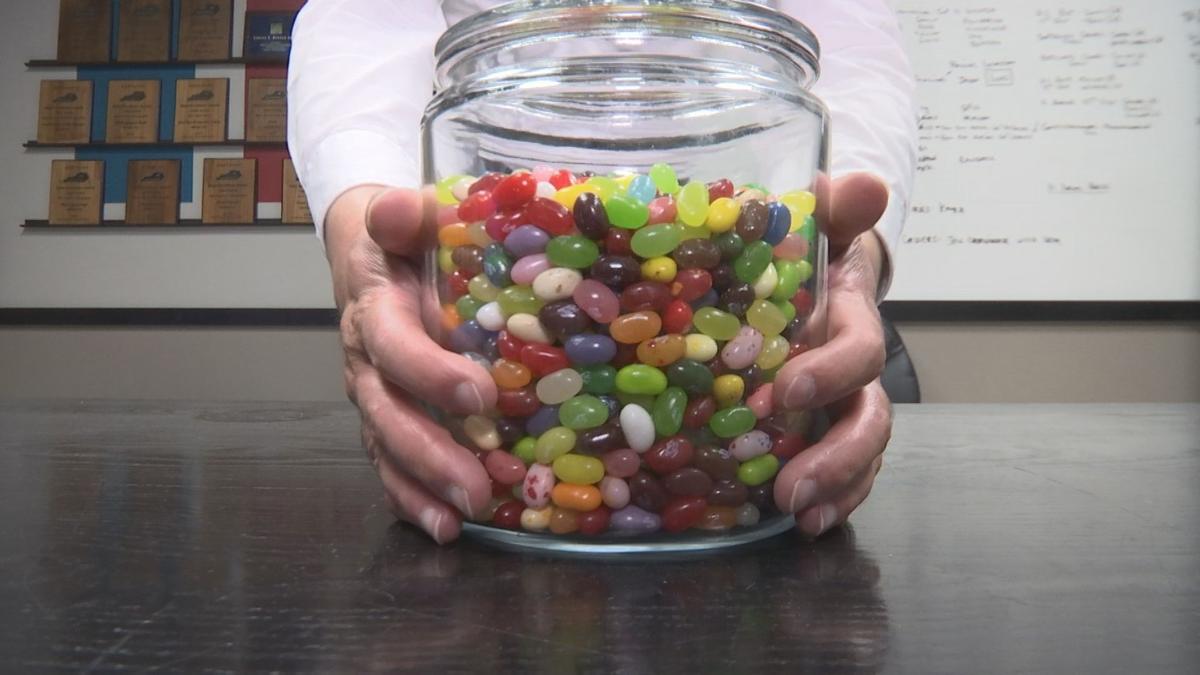 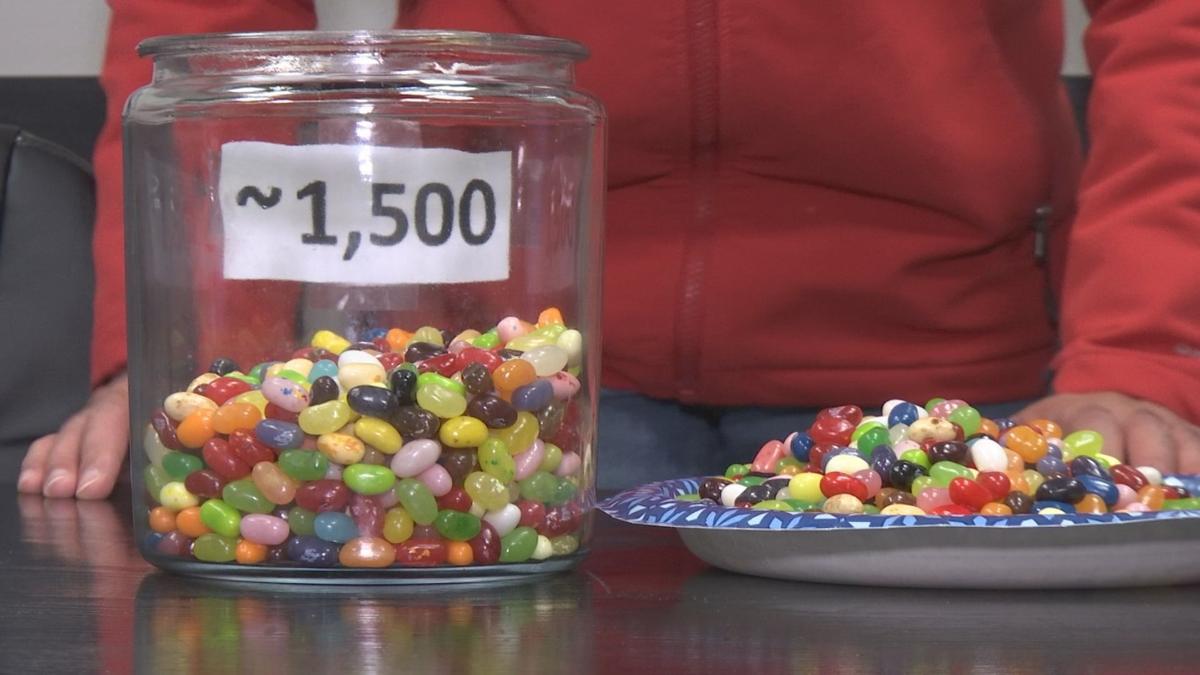 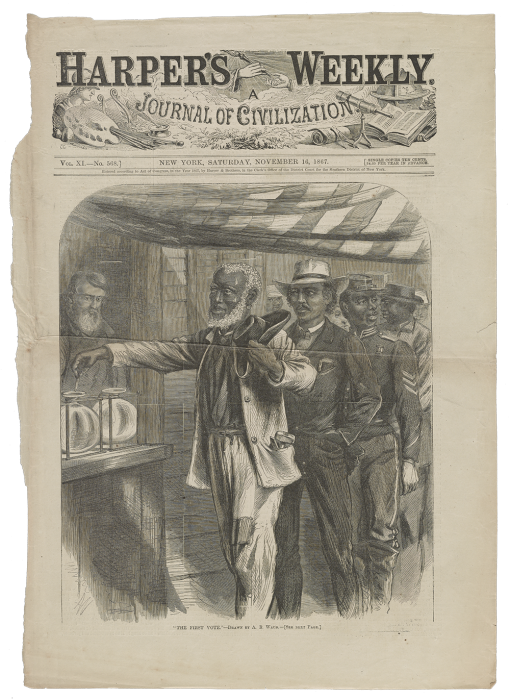 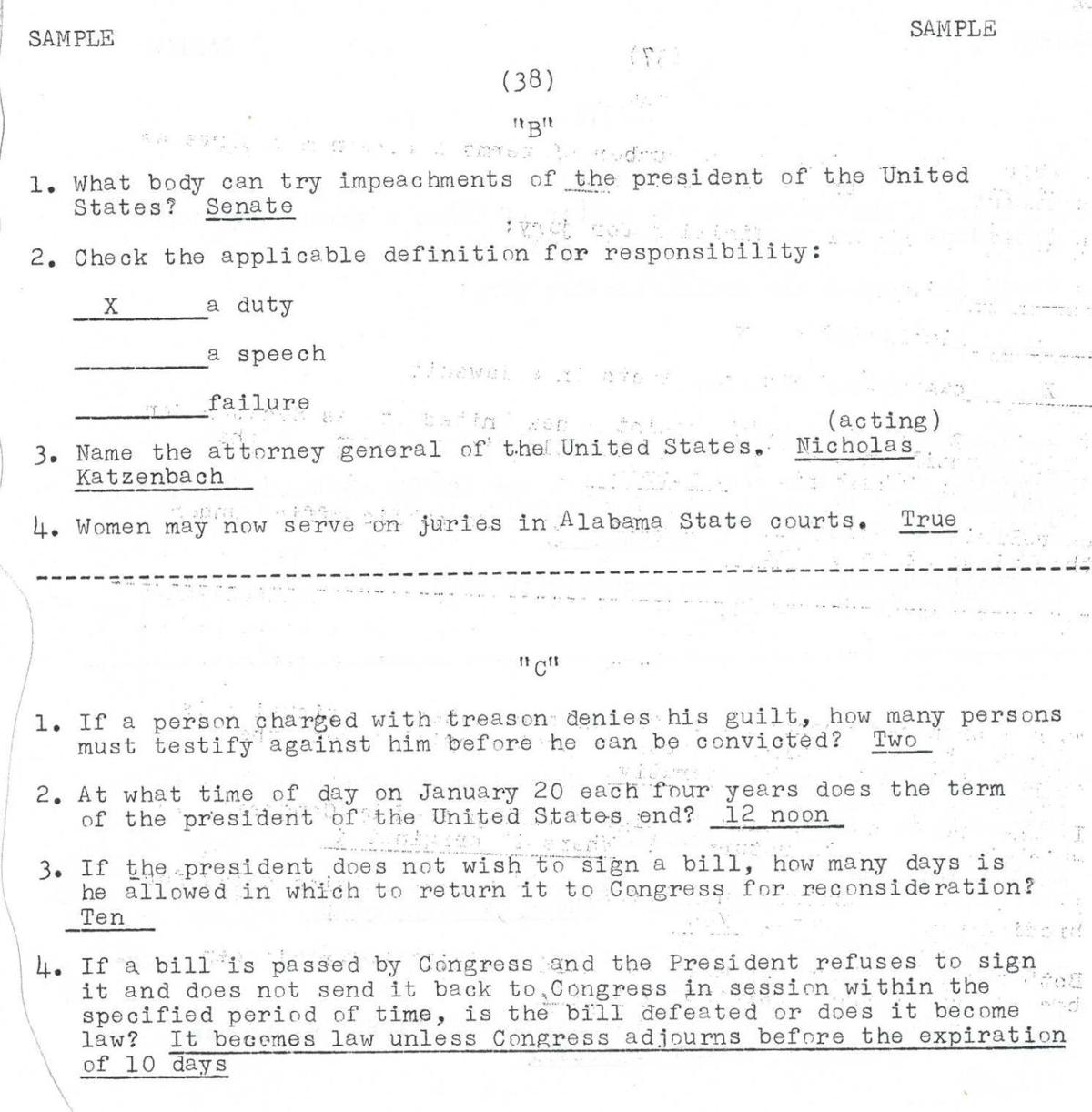 Brent Taylor, an associate professor of history at WKCTC, provided this copy of a literacy test from Alabama. 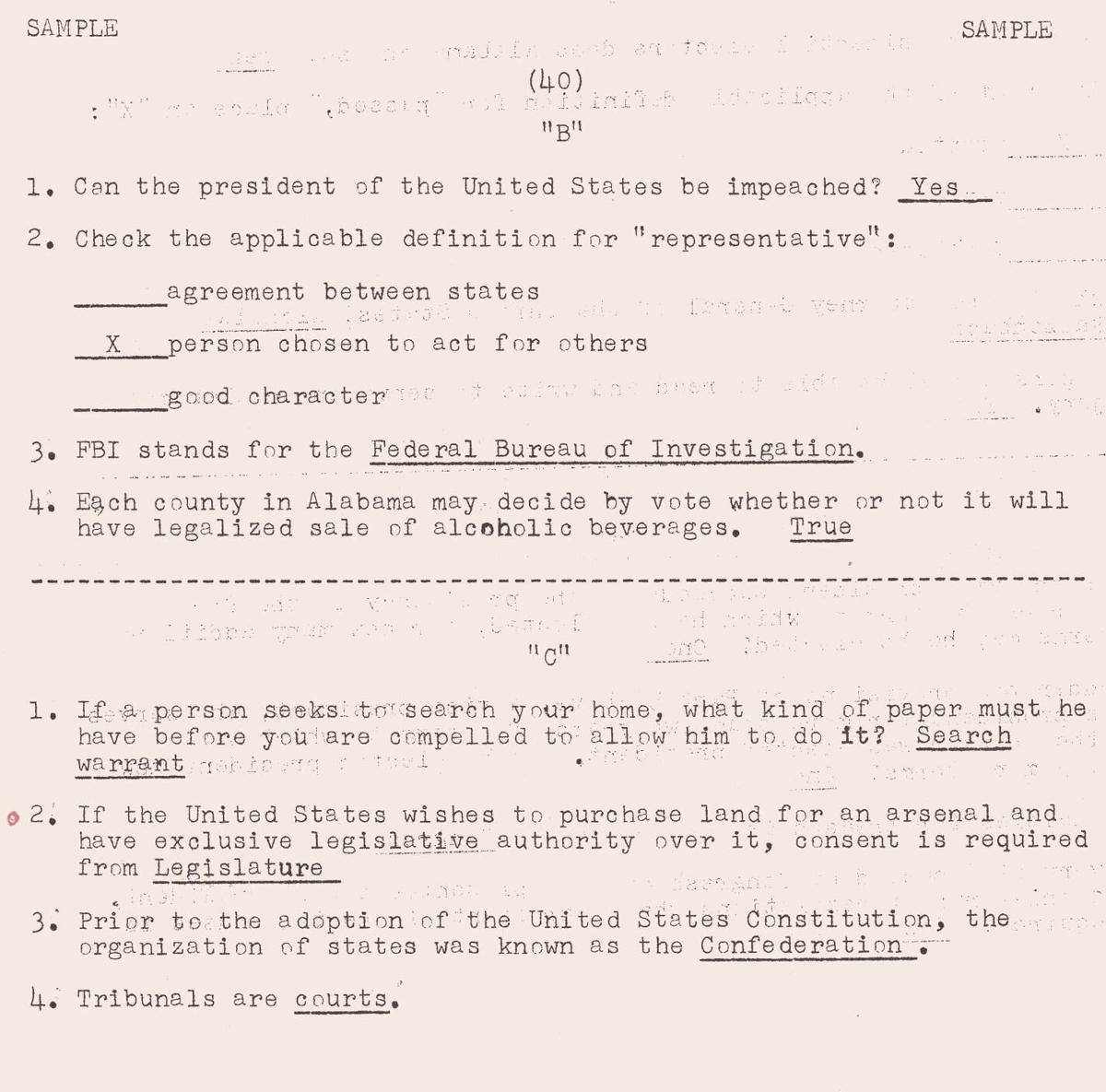 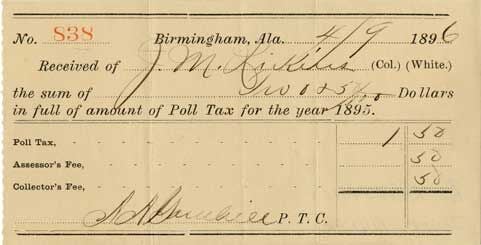 Taylor provided this copy of a poll tax receipt from 1895. 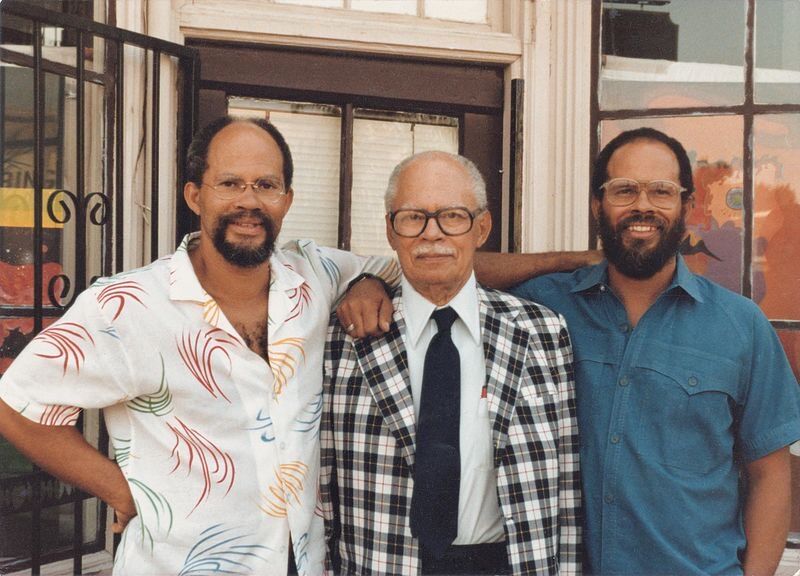 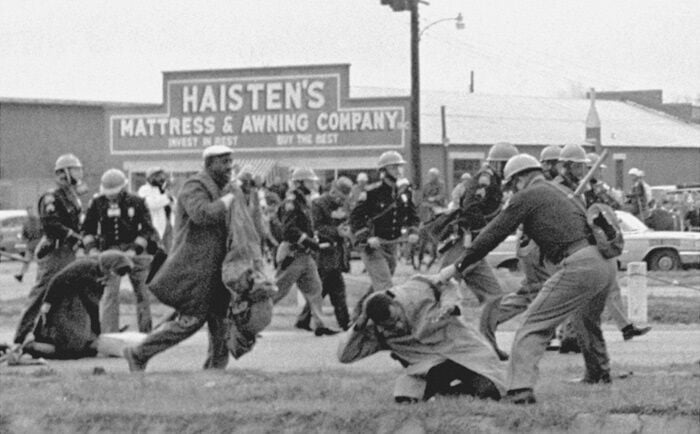 PADUCAH — Voting only takes minutes. But for many, the right to vote took decades of sacrifices. As we look forward to Election Day next Tuesday, we look back on the challenges people of color went through to cast their ballots.

One tactic that was used to prevent Black people from voting during the Jim Crow era was the so-called jelly bean test. Some registrars would ask prospective Black voters to guess the number of jelly beans in a jar. A local woman said her great aunt experienced the test.

"We may no longer have to guess the number of jelly beans in a jar in order to cast a ballot," said Obama. "But even as we sit here, there are those in power are doing their darnedest to discourage people from voting — by closing polling locations, and targeting minorities and students with restrictive ID laws, and attacking our voting rights with surgical precision, even undermining the Postal Service in the run-up to an election that is going to be dependent on mailed-in ballots so people don't get sick."

Olga Koulisis, an assistant history professor at Murray State University, said voter suppression against minorities were taking place even after the adoption of the 15th Amendment in 1870, which gave Black men the right to vote.

"Though the 15th Amendment prevented voting discrimination based on 'race, color, or previous condition of servitude,' that didn't prevent violent voter intimidation as local whites often policed the behavior of racial minorities within their communities," Koulisis wrote in an email.

William Mulligan, a professor of history emeritus at Murray State, gave an example.

"It was not uncommon in the late 19th, early part of the 20th century, for armed white men to go to the polls to try to keep African Americans from voting," said Mulligan. "And they often would have signs, 'Coon Hunting Club,' obviously using the racial slur. So when we see today armed people parading around and talking about going to the polls and carrying their weapons into the polls, that's a terrifying reminder of the use of violence to intimidate minorities, especially African Americans, from voting."

"An important part for your viewers to understand about these voter suppression laws was that they were typically coded in non-racial terms (literacy tests, state's right to determine voting requirements, civic exams, poll taxes), but resulted in clear racial distinctions. Following the laws on the books meant creating a system in which whites could vote and many people of color could not," said Koulisis. "I think it's also important for us to note that states were able to use literacy tests and poll taxes to successfully suppress minority votes because people of color experienced inequalities in education and economic opportunities. Political suppression was tied to systemic educational and economic inequalities."

Brent Taylor, an associate professor of history at West Kentucky Community and Technical College, provided a copy of a poll tax receipt from 1895, which showed a total of $2.50. Taylor said during that time, many poor people made only about $300 to $400 a year, so the poll tax represented a significant fee.

As for the literacy tests, Taylor said questions were mostly about history, civics, and specific clauses in the Constitution, making them difficult for the average person. Below is an example of a question from a literacy test in Alabama:

"If a bill is passed by Congress and the President refuses to sign it and does not sent it back to Congress in session within the specified period of time, is the bill defeated or does it become law?"

Alonzo Davis, an artist who lives in the Washington, D.C., area but operates the Artist-in-Residence Studio in Paducah, recalled the literacy test that his father faced when trying to register to vote in Tuskegee, Alabama, in the 1940s.

"People of color were required to pay a poll tax and also to take an exam. I remember as a kid, (my father) coming back, saying, 'Can you believe this?' On the exam, actually asked, 'How many windows in the White House?' So that's a historical note that I've always remembered and has been part of my effort to always be engaged in the voting process," recalled Davis.

Davis said because he was a child at the time, he did not comprehend how unfair the question was.

"I always thought like it was a joke, and you treated it as if it was something ridiculous," Davis said. "And of course, I didn't really appreciate the true meaning of it until I became a teenager and an adult."

Koulisis said although the 24th Amendment, which was adopted in 1964, got rid of poll taxes in federal elections and the Voting Rights Act of 1965 expanded the political participation of minorities, literacy tests continued in several states until amendments were added to the Voting Rights Act in 1970.

To achieve such voting rights, Mulligan noted that many people made immense sacrifices.

"If people realize that this wasn't just given. Women didn't just one day say, 'We would like to vote,' and men said, 'Well, of course.' It was a long struggle," said Mulligan. "Women were jailed. Women were beaten. It was a struggle, in very sense of the word, to get the right to vote. African Americans beginning to assert the right to vote in the 1950s. People were murdered. We just lost John Lewis, the great civil rights leader, who was clubbed and beaten, basically left for dead for a civil rights march. Police dogs and fire hoses turning loose on people demonstrating for their rights."

"So to be the recipient of the benefits that those people fought so hard to gain for all of us," Mulligan continued. "And we need to remember that expanding rights to include women benefited men. Extending rights to African Americans benefited white and all Americans. We all benefit when more people are included in this system and given full rights and full freedom."

Meanwhile, Davis still recalls the first time he voted - in the early 1960s in Los Angeles.

"It was sort of like a manhood activity, sort of like being able to drive for your first time," he said "You're an adult now and you have a responsibility to be a participating citizen."

Although election day is Tuesday, Nov. 3, Kentuckians can still do early in-person voting Saturday and Monday.