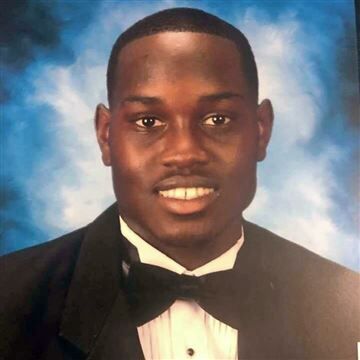 Ahmaud Arbery in a family photo.Courtesy of family 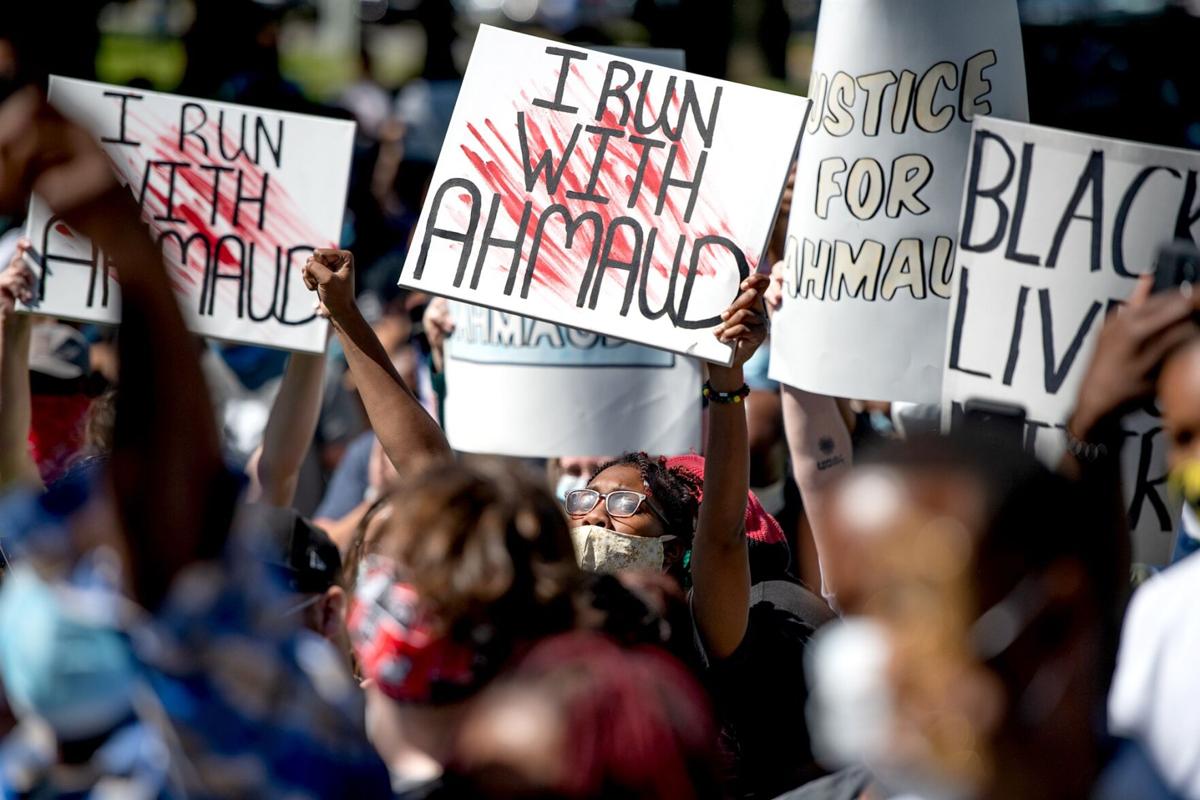 Demonstrators protest the shooting death of Ahmaud Arbery at the Glynn County Courthouse in Brunswick, Ga., on May 8.Sean Rayford / Getty Images file 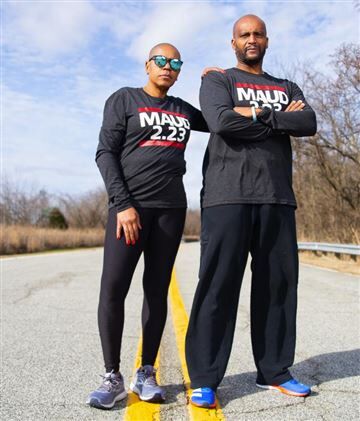 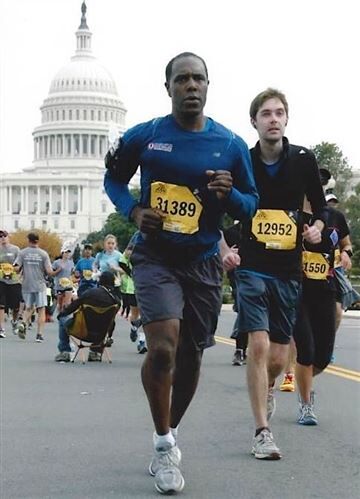 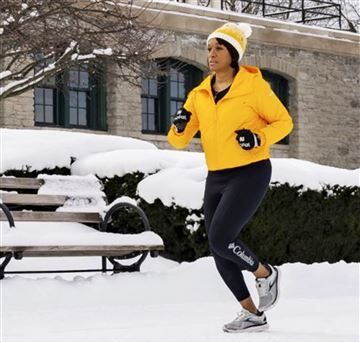 Before he goes on an occasional jog, Akeem Baker makes sure he wears something bright. He charts a familiar course through neighborhoods where he is known. And he looks up at the sky and gives a nod to his best friend, Ahmaud Arbery.

The ritual is painful for Baker. He finds it disconcerting that he is compelled to follow a checklist of precautions reserved only for Black runners to preserve his safety. It also hurts because it was the tragic killing of Arbery — his friend since they were 6 years old — in Brunswick, Georgia, a year ago that sparked the safety measures, which he did not impose before last Feb. 23.

"I used to run for health reasons," said Baker, a 2016 Morehouse College graduate. "Now I run for a sense of therapy, as if I am chasing some sort of freedom."

Baker's life and inspirations for running changed when Arbery's sister called him while he was in New York the night her brother was chased down in a pickup truck, shot and killed as he jogged. Two white men are awaiting trial. A third man, who also was arrested, recorded the shooting on cellphone video.

"Ever since February 23, 2020, I think of my friend and pray that his life was not in vain," Baker said. He met Arbery on an elementary school bus, and they became fast friends for the next 20 years.

He said he was "flabbergasted" when he read a text message from Arbery's sister, who shared what she was told at the time — the false information that Arbery had broken into someone's home and was slain. "I cried the whole night in the bathroom," Baker said. "I was heartbroken. And I'm still messed up."

Father and son Gregory and Travis McMichael chased Arbery, who had stopped during his jog to wander inside a house under construction in their neighborhood, prosecutors say.

The image is lodged in the brains of Black runners who spoke to NBC News: Arbery, 25, stumbling before crashing to the ground after he was shot.

"His tragic death changed everything for Black runners," said Kevin O. Davis, a member of the Plano Running Club in Texas, which has 2,000 members, almost all of them white. "I have changed everything. I've seen people in their car slow down as I run and look at me in their rearview mirror to make sure I was not robbing their house. I have come up on white ladies who scream just because they see me run by them.

"Once, when I stopped running at a light, this white guy rolled down his window and sprayed insecticide in my face — for no reason. I thought I was going blind.

"But Ahmaud Arbery is something different, something horrific. So I don't jog as much when it's dark, and when I do I make sure I'm wearing reflectors. I'm nervous about running in black jogging clothes," he said. "It's all different. We have to be self-aware."

Black female joggers similarly make adjustments for safety, said Kim Backey of Buffalo. Backey, an avid runner who takes to the street even in the snow, took Arbery's killing as a cue to change her jogging patterns.

"We, as Black runners, have to worry about what we wear and where we go," said Backey, 55. "I wear more bright colors now. I have told my sons to not wear a hoodie because they will be judged. Now I have to take my own advice when I go out and run. And that's a shame.

"We have to run smart, but at the same time we shouldn't have to give up our liberties to run because of our race," she said.

With that thought and Arbery's spirit in mind, the 2:23 Foundation was established last year to raise awareness of the shooting and to advocate "to help young men and women pursue paths to help avoid similar occurrences and instances of injustice." The group, which has more than 82,000 followers on Facebook, has scheduled a national 2.23-mile race in Arbery's memory on the anniversary of this death.

Tyrone Irby, owner of The Choice Fitness and Sports Performance Center in Durham, North Carolina, has memories that help him understand the fear Arbery felt a year ago. Irby said that when he was growing up in Brooklyn, New York, two white youths chased him after he missed his bus home from school. "They were hollering at me as I ran," he said. "I ran fast enough to avoid them. But I remember the fear I felt and can only imagine what Ahmaud felt.

"As Black runners, we have to have eyes in the back of our heads. It's a part of being Black in America. It's sad to think that every day we have to think about the shoes we wear, times we run, the colors we choose, where we run. And now, during a pandemic, wearing a mask, a hoodie, running at 6 a.m. ... it can be problematic."

But it has not stopped Irby and others from continuing to hit the pavement and raise awareness about Arbery's death. He created #TogetherWeStandNC, a group that generates discussions around race, with Arbery's killing as a conversation starter.

Irby, a member of the huge social media group #RunWithMaud, has more than 100 runners committed to another run in Arbery's memory — the Maud 2.23 virtual run on Tuesday 23 is sponsored by Fleet Feet Carrboro, an apparel company in Durham.

"Everyone should be safe when they run. But that's not the case," Irby said.

He added: "When I leave the house at 3 a.m., I have my registration handy in my car, my ID handy and I drive the speed limit. Now we have to have similar precautions when we run. Every day is an emotional toll we have to pay for being Black. We have to be aware. It's a bad way to live."

"It's fascinating, because we think of trauma and stress with soldiers in a combat situation," Holloway said. "But what about the stress of ... what happened to Ahmaud Arbery? It's about how you process a situation that impacts you. But the fact that Black people have those kinds of instances and thoughts of 'it could happen to you' speaks to the prominence of racism."

Baker said the trauma of Arbery's death prompted him to seek counseling. Every two weeks he visits a therapist to help him cope. "It's been a lot," he said. Kobe Bryant "died on my birthday — I was a big fan. Less than a month later, my best friend gets killed. Ahmaud was my go-to person."

Augustus Turner, 37, a major in the Army stationed in Madison, Alabama, wrote about the psychological trauma of Arbery's killing in a Facebook post that went viral. It read, in part: "Sometimes, in the back of my head, I foolishly think to myself: I am just a black man who jogs!

"Why would somebody shoot me just because I am black and unfamiliar? I am a former EMT. ... I have been a licensed attorney and active duty Army Officer for nine years. I have represented and helped over 60 sexual assault victims. ... I helped justify the destruction of hundreds of enemy targets in Iraq. I have cleared the names of wrongfully convicted criminals. Who would want to hurt me?

"Well, none of that matters because ... I am still a black man who jogs. If I frighten the wrong white person, or match the description of a threatening person ... I become no different from Ahmaud Arbery."

Turner said he did not intend post about the shooting. But then he saw the video.

"I could only watch it once," he said. "Having to guard against being killed just for jogging ... it snatches one more slice of our lives away. We constantly have to live in fear or be on alert. I have taken my wife's concerns about me running alone seriously. She always had this fear. So now I make it a point to go walking in the neighborhood with my family so people can see I'm a husband and family man and not a threat. Maybe they will remember me. Maybe."

Backey, who cried watching the video of the shooting, said: "As a runner, I understand how Ahmaud would stop and look into a house that's being built. That's what we do — we take in our surroundings. Jogging is freedom. I recently took a different route on my run and I stopped and thought about Ahmaud. And I said, 'Let me get out of here.' It should not be this way."

And yet, few runners expect that it will be different any time soon. Arbery's life and especially his death will resonate for quite some time.

"Ahmaud and I ran together a lot," Baker said. "He kept a better pace than me, but he always encouraged me and pushed me to go harder. He may have had dark skin, but he was the brightest light. His smile and energy were always bright. And we have to make sure people always know that."