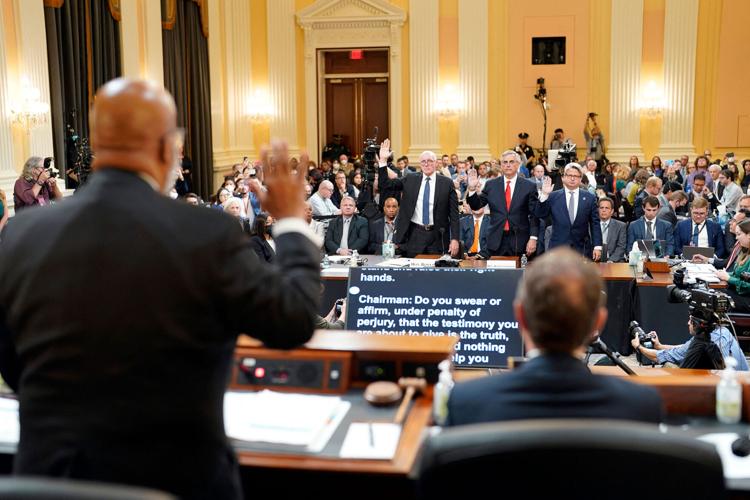 Rep. Bennie Thompson (D-MS), Chairman of the Select Committee to Investigate the January 6th Attack on the US Capitol, swears in Rusty Bowers, Arizona House Speaker; Brad Raffensperger, Georgia Secretary of State and Gabriel Sterling, Georgia Secretary of State Chief Operating Officer during the fourth hearing on the January 6th investigation in the Cannon House Office Building on June 21, 2022 in Washington, DC. 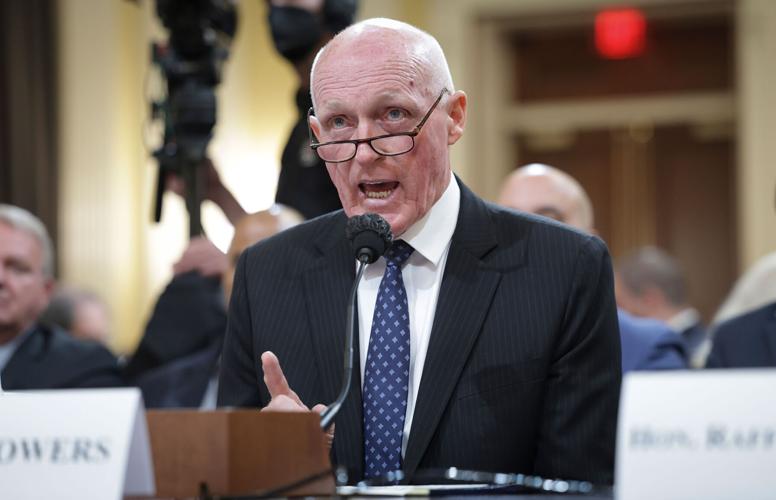 The panel featured testimony from three Republican officials who were all on the receiving end of Trump's outreach after the election: Georgia Secretary of State Brad Raffensperger, his deputy Gabe Sterling and Arizona House of Representatives Speaker Rusty Bowers.

Like previous hearings, these officials testified about their unwillingness to participate in legally dubious schemes that would undermine the election, including efforts to subvert the Electoral College with fake pro-Trump electors.

Multiple witnesses told the committee that Trump was personally involved in the effort to put forward slates of fake electors in key battleground states — a key part of the broader effort to overturn Biden's legitimate election victory.

CNN has previously reported on the role that key Trump allies, including his former attorney Rudy Giuliani, played in overseeing the effort but witnesses revealed new details Tuesday about how the former President himself was not only aware of the push, but seemingly endorsed it.

Ronna McDaniel, chairwoman of the Republican National Committee, testified that she received a call from Trump and conservative lawyer John Eastman after the election about helping to assemble the electors.

"In this effort, what did the President say when he called you?" an investigator with the committee asked McDaniel, according to video of her testimony played during the hearing.

"Essentially, he turned the call over to Mr. Eastman, who then proceeded to talk about the importance of the RNC helping the campaign gather these contingent electors in case any of the legal challenges that were ongoing change the result of any dates," McDaniel responded.

"I think more just helping them reach out and assemble them but...my understanding is the campaign did take the lead and we just were helping them in that role," she added.

Bowers also told the committee that he received a call from Trump and Giuliani during which they urged him to go along with a plan to put forward illegitimate, pro-Trump electors from the state.

"I told them I did not want to be used as a pawn," Bowers said on Tuesday, recalling what he told Giuliani and Trump on the November 22 phone call.

The Arizona House speaker also testified that Giuliani acknowledged what he was proposing had never been done before but continued to push him anyway. That also came up in other conversations with Eastman and others, Bowers said.

The first was Republican Rep. Andy Biggs of Arizona, who called Bowers on the morning of January 6, 2021, asking him to support decertification of his state's electors for Biden.

"I said I would not," Bowers testified on Tuesday.

The second occurred several hours later, minutes before then-Vice President Mike Pence gaveled in the joint session of Congress to certify the electoral votes. According to text messages obtained by the committee, an aide to GOP Sen. Ron Johnson of Wisconsin asked an aide to Pence how Johnson could hand-deliver him the fake slates of Trump electors from Michigan and Wisconsin, which had not been sent to the National Archives. Pence's aide responded that Johnson should "not give that to him."

Both the effort to decertify Biden electors and put forward fake Trump electors were part of the Trump team's scheme to stop the congressional certification of the election on January 6. The role that Trump's allies in Congress played have been of interest of interest to the committee, which has subpoenaed five House GOP members, including Biggs and House Minority Leader Kevin McCarthy.

The House Republicans have not complied with the subpoenas and have denounced the panel's investigation.

The committee's chairman, Democratic Rep. Bennie Thompson of Mississippi, told CNN's Manu Raju during a recess in Tuesday's hearing that the committee has "not yet" reached out to Johnson amid the revelations of his involvement in the fake elector scheme.

"The committee hasn't made a decision" on whether to call him to testify, Thompson said.

Witnesses describe how Trump's lies had serious consequences — including threats

The committee's hearing underscored how the lies about the election spread by Trump and his team spiraled into multi-faceted disasters for the state officials forced to grapple with them.

All of the witnesses who appeared at Tuesday's hearing talked about the serious repercussions they faced as a result of the false claims that Trump and his team put forward. That included pressure to help in the effort to overturn the election, the repeated attempts to try to debunk the claims and the threats they faced from pro-Trump supporters for refusing to go along with Trump's efforts.

"No matter how many times senior Department of Justice officials, including his own attorney general, told the President that these allegations were not true, President Trump kept promoting these lies and put pressure on state officials to accept them," committee member Rep. Adam Schiff, a California Democrat, said during Tuesday's hearing.

The stories were similar in many respects to the pressure campaign that Pence faced from Trump and his supporters before January 6 — and the threats he faced from rioters at the Capitol.

Bowers delivered emotional testimony about "disturbing" protests outside his home. Bowers welled up as he discussed the impact protests at this house had on his wife and his daughter, who was at home gravely ill at the time and was "upset by what was happening outside." And he read passages from his personal journal about friends who had turned on him.

Bowers also described how Trump and his team wouldn't take no for an answer and continued to pressure him to support decertifying the state's electors up to the morning of January 6.

Raffensperger described the attacks that his wife faced after the election, which he said he suspected was an attempt to pressure him to quit. Schiff cited Raffensperger's book, in which he wrote, "I felt then and still believe today that this was a threat."

Trump supported a Republican primary challenge to Raffensperger, GOP Rep. Jody Hice of Georgia, as part of his campaign to oust the Republicans who opposed his lies about the election. But Raffensperger won his primary in May.

Yet again, the Democratic-run January 6 committee turned to Republican officials to make their case against Trump. In fact, the majority of the in-person witnesses so far have been Republicans.

They all provided damning testimony against Trump, describing how he repeatedly tried to twist their arms and cajole them to overturn the results. They also described the threats and pressure they faced from Trump supporters who believed his election lies and protested outside their homes and offices, and bombarded them with calls and text messages.

One of the main GOP gripes about the committee is that it's stacked with Democrats. And it is, largely because Republican leadership refused to participate last summer. But so far, the most damaging testimony has come from Republicans and members of Trump's inner circle.

Bowers said under oath Tuesday that Trump lied about him in a press release that came out shortly before the hearing started, where Trump claimed Bowers told him in November 2020 that he believed the election was rigged.

In the statement, Trump attacked Bowers and described a call they had after the election, claiming, "During the conversation, he told me that the election was rigged and that I won Arizona." Trump added, "Bowers should hope there's not a tape of the conversation."

Under questioning from Schiff, Bowers confirmed that he "did have a conversation with the president, but that certainly isn't it."

The comments were a real-time refutation of the former President. While Trump can say whatever he wants in a press release, Bowers is required to testify truthfully before Congress, and could be prosecuted for lying under oath.

The back-and-forth harkens back to Trump's infamous conversations with former FBI Director James Comey in 2017, where Trump lied about what they discussed and raised the specter of "tapes." Like Bowers, Comey testified to Congress, under penalty of perjury, about the conversations with Trump.

It was striking to watch Schiff dissect troubling Trump phone calls with Georgia election officials, where he tried to convince him to ignore Biden's victory and interfere with the vote count so he could prevail.

These exchanges stood out because it's not the first time Schiff highlighted Trump's misdeeds that were captured in a phone call. Remember: Schiff was the lead investigator in Trump's first impeachment, which revolved around a 2019 call with Ukrainian President Volodymyr Zelenskyy, where Trump pressured Zelenskyy to publicly announce that his country was investigating Biden for corruption.

In that situation, the White House released a transcript of the call, but there was no audiotape. This time around, the January 6 committee played the recordings of Trump's transition-era conversations with Raffnesperger and Frances Watson, a top investigator from the Georgia secretary of state's office.

Trump's attempts to overturn the 2020 election — that's precisely what Schiff warned about during Trump's first impeachment trial, where he was acquitted. That trial was all about Trump's efforts to undermine the integrity of the election by soliciting foreign interference. These January 6 hearings are all about exposing Trump's efforts to enlist fellow Americans in his campaign to subvert the results.

Later in the day, the committee heard from Wandrea "Shaye" Moss and her mother Ruby Freeman, who were election workers in Atlanta during the 2020 election. Trump, Giuliani and other GOP figures put them both at the center of their unhinged lies about massive voter fraud in Georgia.

Coverage of Trump's presidency often focused on his words and lies. But the emotional and deeply personal testimony from Moss and Freeman flipped the script, and showed human toll of Trump's lies.

They described in devastatingly terms how Trump's lies essentially destroyed their lives.

Moss said she felt "helpless," gained 60 pounds, and stopped giving out her business card because "I don't want anyone knowing my name." Her mother said she gets "nervous when I have to give food orders," because someone who believes Trump's lies might recognize her name. She said she felt "homeless" while she lived in hiding for two months, after the FBI told her she wasn't safe at home.

"I have lost my sense of security, all because of a group of people, starting with (Trump) and his ally Rudy Giuliani, decided to scapegoat me, and my daughter, Shaye, to push lies about how the election was stolen," Freeman said in a videotaped deposition, a clip of which was played during Tuesday's hearing.