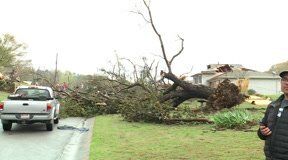 There are approximately 30 to 50 homes or structures damaged in Pelham following a tornado Thursday afternoon, according to a tweet from the Pelham Police Department. 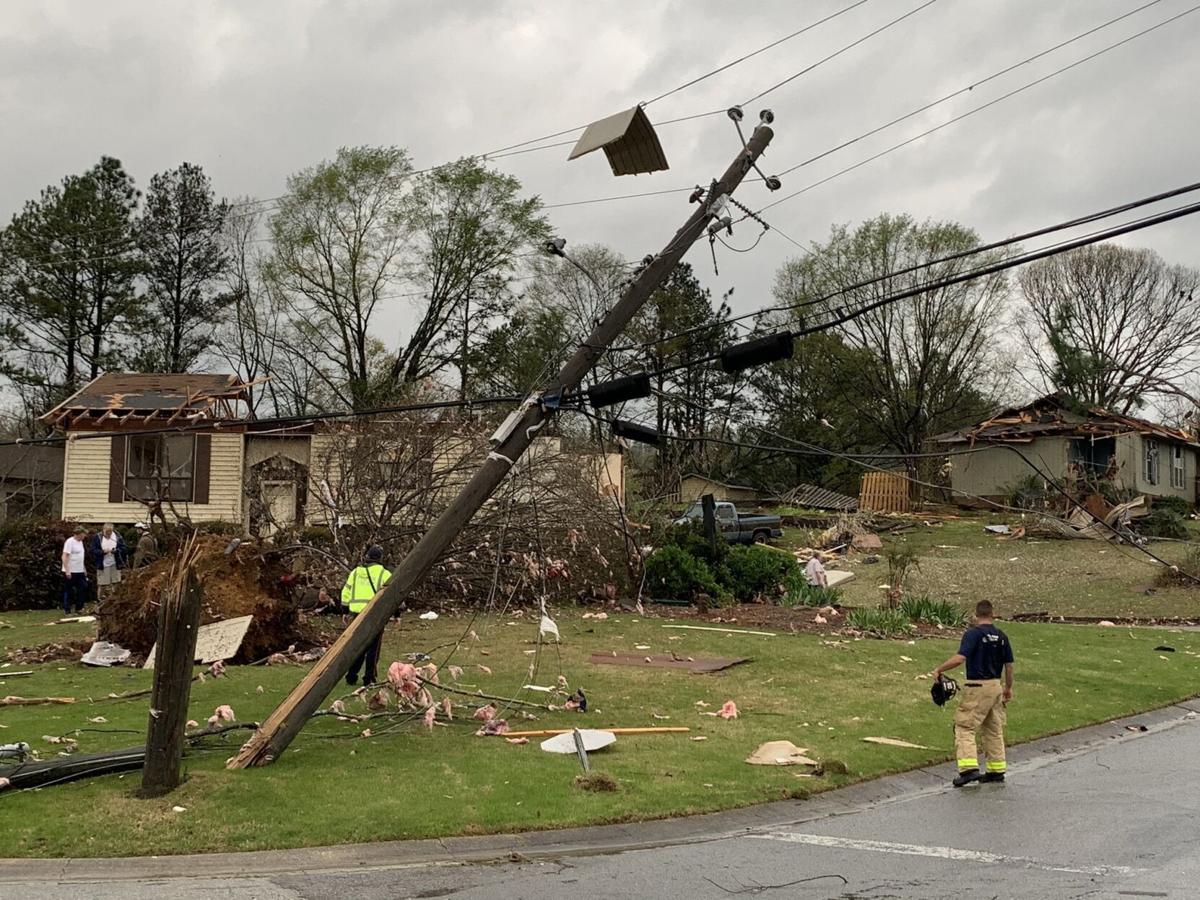 No injuries have been reported in the Crosscreek community, which suffered extensive damage in a tornado Thursday afternoon, Pelham Public Information Officer Ainsley Allison said on a Facebook livestream. 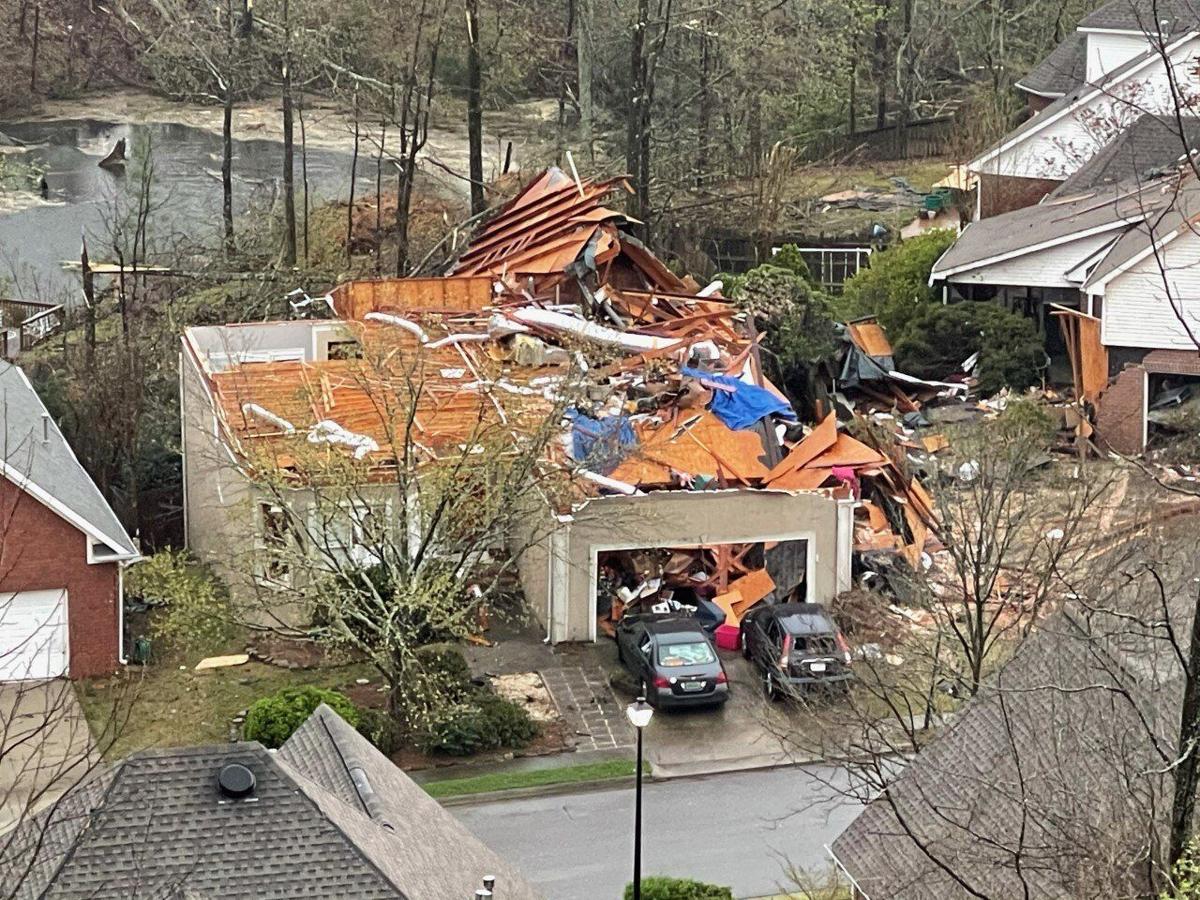 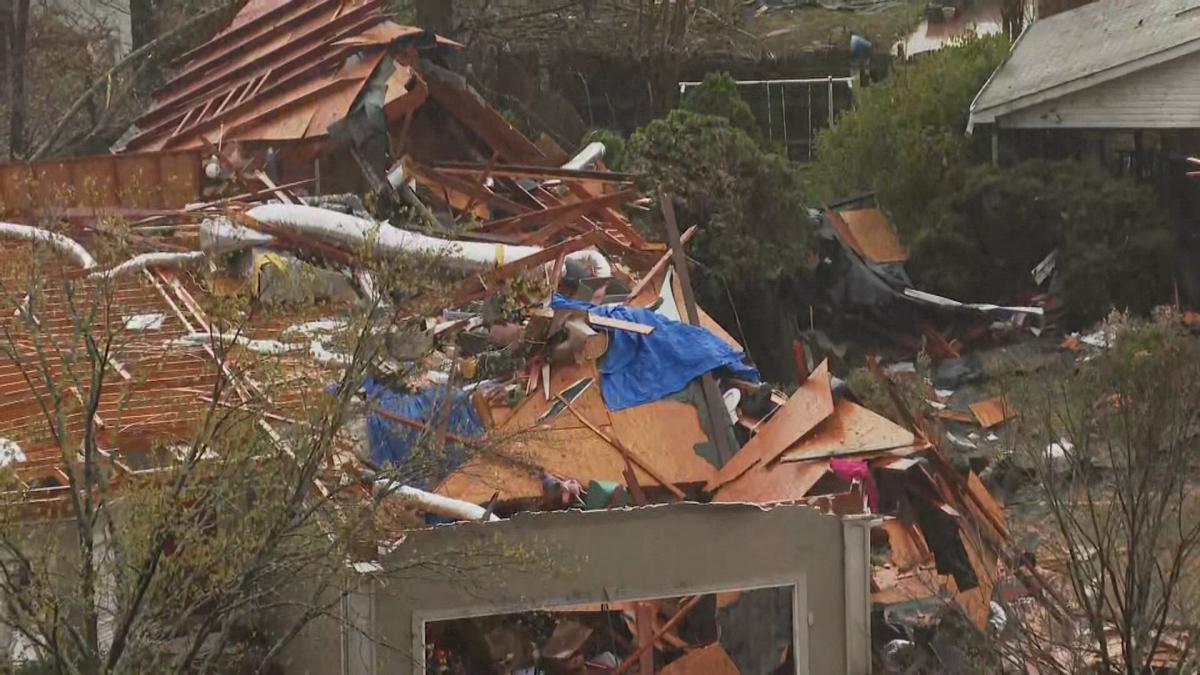 Tornado damage from the Eagle Point community in Shelby County, Alabama, near Birmingham.

"We're worrying about the second storm that's coming through, possibly on the same track," Wade said.

Seven tornadoes have been reported in Alabama, according to the National Weather Service. And authorities have reported extensive damage in the Birmingham metro area.

The National Weather Service office in Birmingham, Alabama, has issued a "tornado emergency" for areas just south and east of the city, in Shelby and Jefferson counties, indicating there is a tornado that could have a potentially significant impact to human life and catastrophic destruction to property.

"Tornado safety plans, everyone," the office said on Twitter. "Get low, get in the middle of the building. DON'T WAIT TO THE LAST MINUTE. TAKE COVER NOW!"

Radar had earlier confirmed a large and extremely dangerous tornado had touched down just southwest of Birmingham, according to the National Weather Service office there.

Between 30 and 50 homes or structures have been damaged in Pelham, Alabama, according to a tweet from the local police department.

Cesar Villaseñor, 22, was in a van with his boss when they were caught in a potential tornado in Pelham. They were trying to get to shelter at his boss' house, Villaseñor said.

"We were literally half a mile from his house and everything was all clear. Out of nowhere, it starts raining and I started recording -- everything starts going to hell basically."

"I was like, this is probably it. I'm probably dead," he said. "At one point, the van was shaking really bad to the point that I thought it was like to flip over. I was just shaking. I couldn't control my hands."

In a video Villaseñor shared, debris is seen flying through the air, uprooted trees lie on the ground and houses are damaged.

Police previously reported extensive damage to the Crosscreek community, but no injuries have been reported in that neighborhood, city spokesperson Ainsley Allison said in a Thursday afternoon Facebook livestream. The footage showed trees, power lines and debris littering the streets. Roofs and entire rooms appeared to be torn off homes in the neighborhood, the video shows.

"It's bad back here, and we need to say prayers for the people who live in this community and come together to help rebuild," Allison said. "As you can imagine, these people are devastated."

Police in nearby Helena also reported major damage. All phone lines to the police department are down, the department said on Twitter, urging residents to call 911 if they need assistance.

Further north, in Florence, about 130 miles north of Birmingham, a police officer was transported to a local hospital after he was struck by lightning, the police department said on Twitter. Officers were able to provide first aid at the scene, and the officer was conscious and responsive.

Almost 55,000 customers were without power in the Southeast Thursday evening, according to poweroutages.us, including more than 36,000 in Alabama.

The potential threat Thursday goes far beyond the Birmingham area: More than 55 million people remain under threat for severe storms from the Gulf Coast to Pennsylvania, with tornadic storms expected continue well into the evening.

The Storm Prediction Center had said there's a high risk of tornadoes -- a level 5 out of 5 -- for much of northern Alabama, including Birmingham, Tuscaloosa and Huntsville. That's the worst and highest forecast outlook issued for severe storms. And while it's very rare for the SPC to issue this kind of outlook -- it's now the second time in a week for the South.

Alabama Gov. Kay Ivey on Thursday issued a state of emergency for 46 counties ahead of the expected severe weather.

A level 4 of 5 risk covers over 5 million people and includes Nashville and Chattanooga, Tennessee.

The SPC on Thursday afternoon issued a "particular dangerous situation" (PDS) tornado watch until 8 p.m. CT for around 5.5 million people in parts of western and northern Alabama, northwest Georgia, central and eastern Mississippi and southern Tennessee. A PDS tornado watch is issued when the SPC forecaster has high confidence that multiple strong tornadoes of EF-2 strength or higher will occur in the watch area.

A "dangerous environment" is developing over the watch area, with multiple rounds of severe storms expected, the SPC said. Tornadoes, damaging winds up to 80 mph and large hail are possible.

"The ingredients will combine on Thursday for another severe weather outbreak in the South," said CNN meteorologist Chad Myers. "Very humid Gulf of Mexico air combined with strong rising motion will create multiple rounds of severe weather including rotating storms that could produce tornadoes."

Severe storms will center Thursday across the Deep South as the severe storm risk area likely expands and becomes more significant. Strong storms will be possible from the Gulf Coast through as far north as Ohio.

"Several long-tracked supercells are still expected this afternoon into this evening from far eastern Mississippi into Alabama and parts of middle and eastern Tennessee," the SPC said Thursday afternoon.

The most intense of these supercells "will be capable of producing strong to violent tornadoes, along with very large hail and substantial damaging winds," it said.

Ingredients were there last week and tornadoes developed, but not as strong as forecasters thought possible. None of the 49 tornadoes were stronger than an EF-2 on a scale of 0 to 5.

Although the right atmospheric ingredients were present, they didn't mix in precisely enough to produce the violent tornadoes that were forecast last Thursday.

"It's like if you put too many carrots in chicken soup, you end up getting a sweet carrot soup and not chicken soup," Myers said.

In Alabama, Anniston City Schools told parents through social media that students would have an E-day on Thursday. Gadsden City Schools announced they would be closed because of the storms.

Meanwhile, the Calhoun County School District in Mississippi said on Twitter that "due to the likelihood of severe weather to include tornado activity, straight line winds, & hail" all campuses will be closed Thursday and students and staff will tune in virtually.

The Pontotoc County School District also announced Thursday will be a virtual day.

"If for any reason students are without power or internet, they will be able to make up the work," officials with the school district posted on social media. "The domes at each campus will also be open tomorrow if anyone needs shelter."