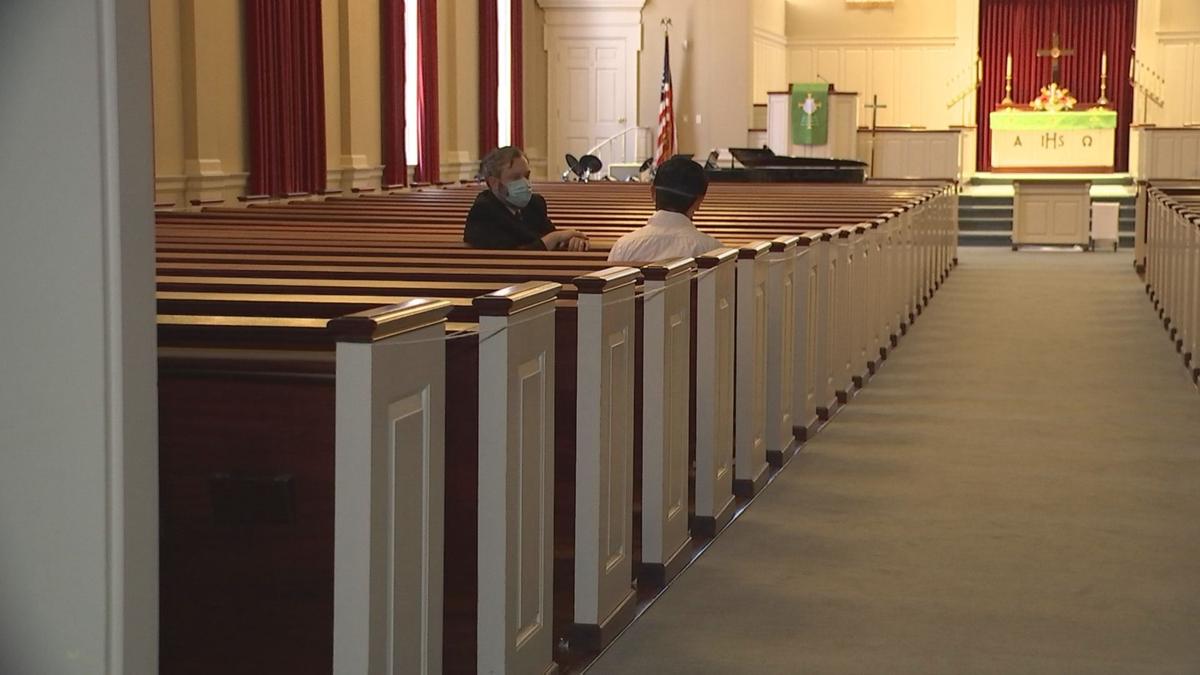 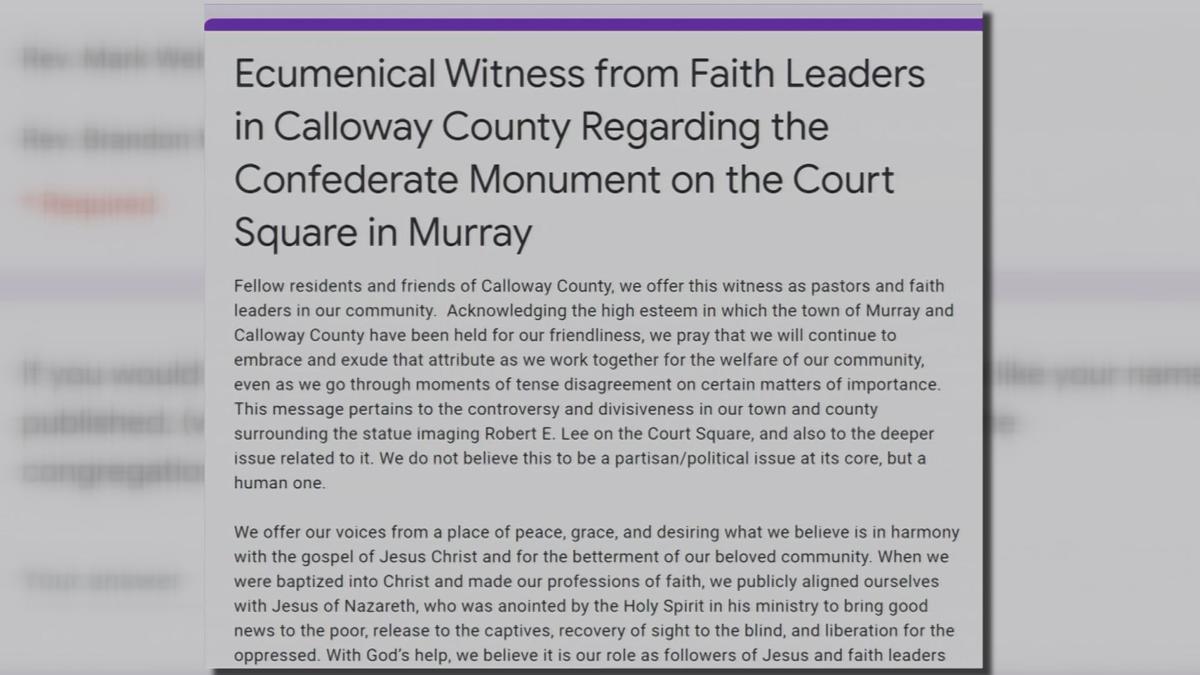 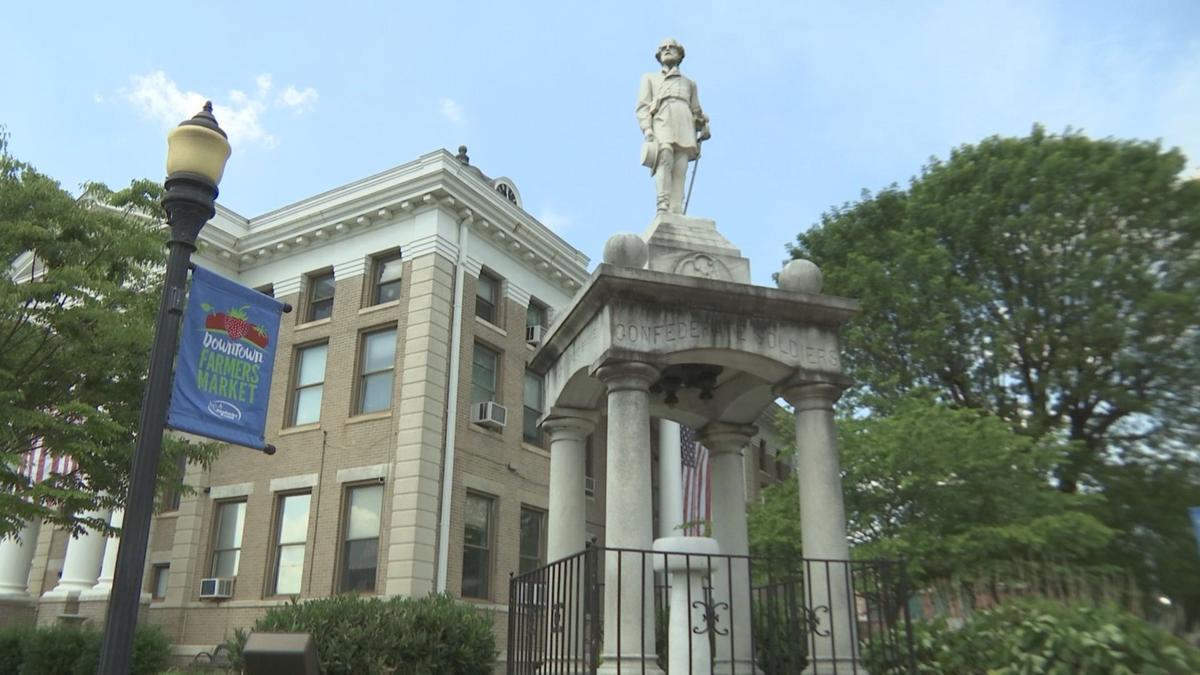 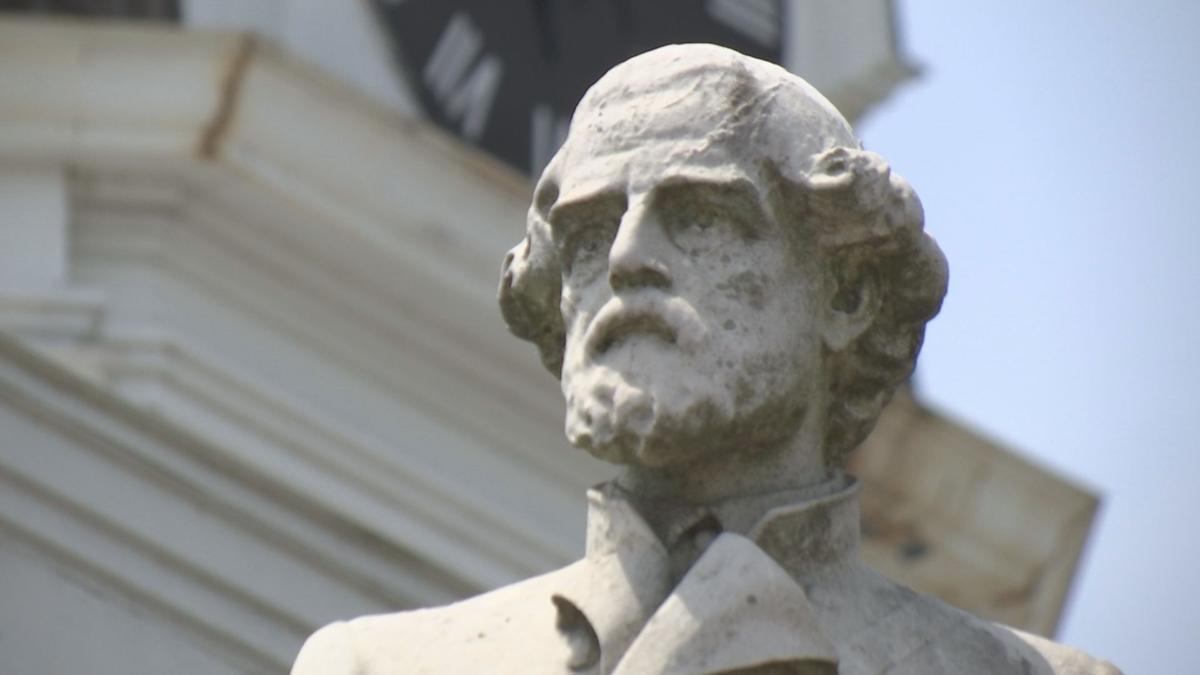 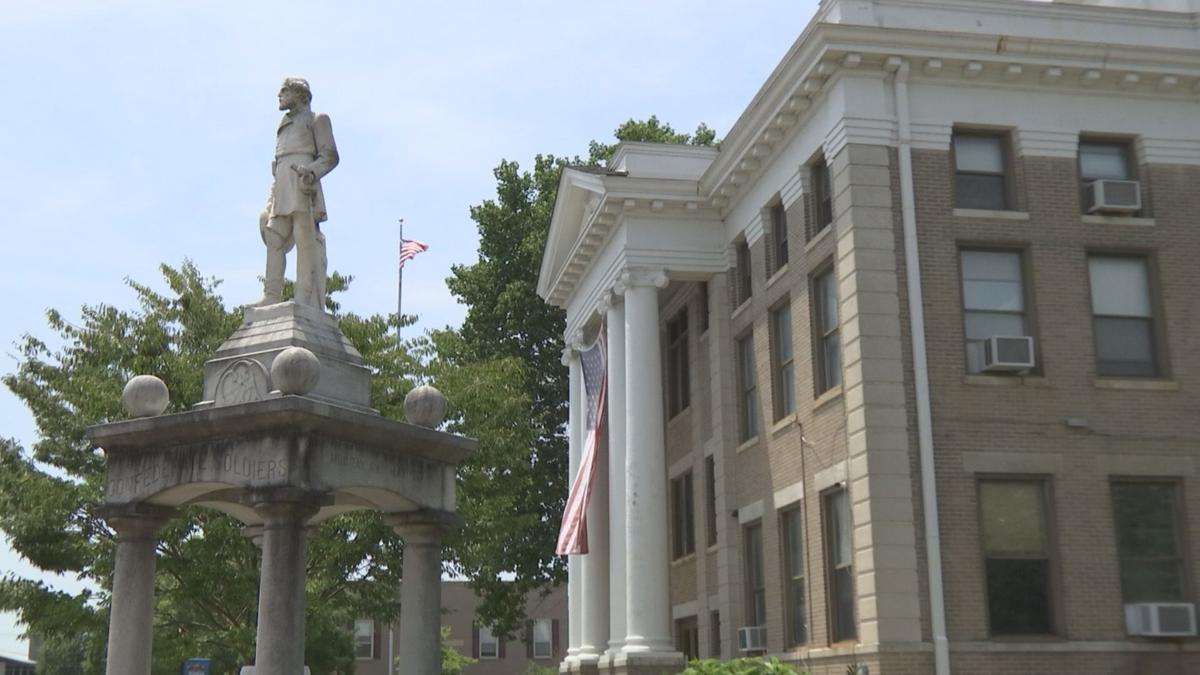 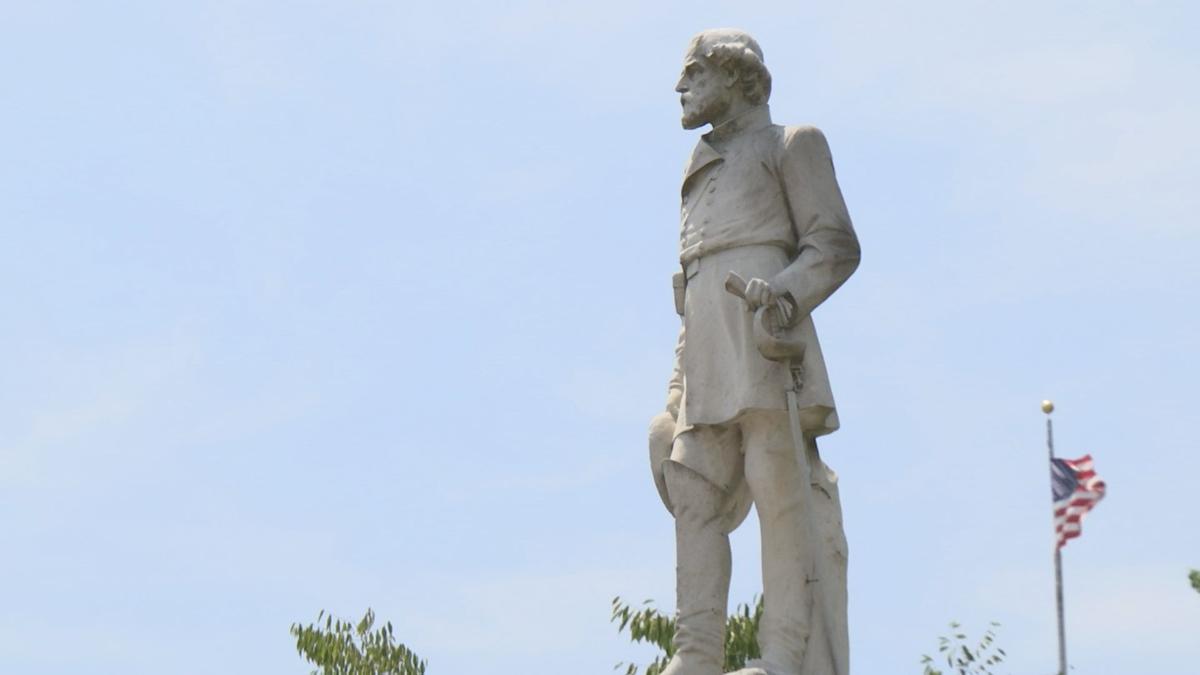 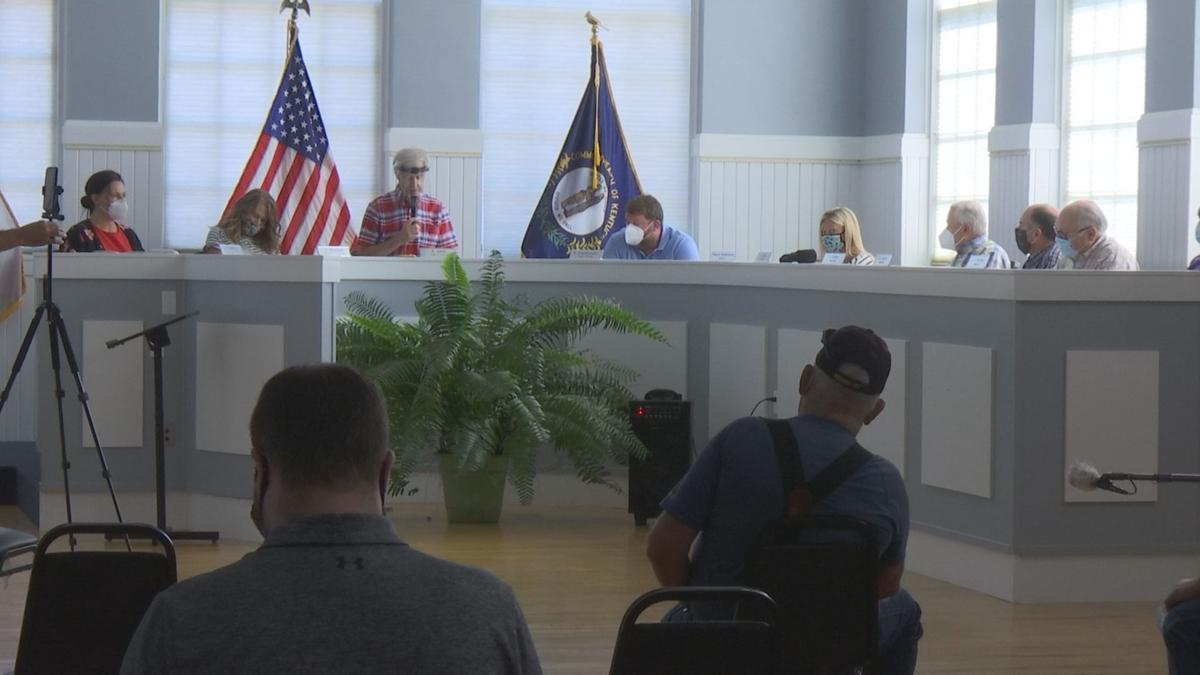 On July 15, the Calloway County Fiscal Court passed a resolution stating the Confederate monument outside the courthouse stays put.

CALLOWAY COUNTY, KY — Faith leaders in Calloway County are expressing their support for relocating the Confederate monument in Murray.

Rev. Jeffrey Rudy, senior pastor at Murray First United Methodist Church, reached out to other pastors to craft a statement titled "Ecumenical Witness from Faith Leaders in Calloway County Regarding the Confederate Monument on the Court Square."

"This message pertains to the controversy and divisiveness in our town and county surrounding the statue imaging Robert E. Lee on the Court Square, and also to the deeper issue related to it," the statement says. "We do not believe this to be a partisan/political issue at its core, but a human one."

The statement — which has 33 signatures, mostly from pastors throughout Calloway County, but also from various leaders and community members — calls for the Confederate monument outside the Calloway County Courthouse to be relocated to another location.

"Still, we seek to go deeper so that we might learn by listening and seeing the harm that has been done and continues to be inflicted upon persons of color from symbols like Confederate flags and monuments," the statement says. "The consistent witness from our black neighbors is that these symbols are received as the celebration of racism and hatred. We cannot promote the message that 'all men are created equal,' a central tenet to the founding of our great nation, while continuing to hoist a symbol that reveres a movement which fought to undermine that very idea."

The statement suggests moving the monument to to the Bowman Cemetery or the grounds of Fort Heiman, where the memorial could be maintained.

"It would be still visible, where people could visit and learn about the history of the war, the Confederacy and so on, which is why we have advocated for those as possibilities," Rudy told Local 6. "I think we're open to other possibilities as well. I think it was just the particular placement of the court square is what we were concerned about."

Rudy said that having the monument outside the courthouse conveys the wrong message.

"A public place is something that glorifies something," said Rudy. "A monument in a public place where people go in and pay taxes and do other things is a very public place, and can be a particularly challenging experience for people who have experienced the statue or other symbols as racism and hatred and a message of unwelcome. And that is not what we believe this town is about. We believe it is a welcoming town. 'The friendliest town in America' it was once deemed, and we want to communicate that — that we're friendly and welcoming of all people who want to pursue life, liberty and happiness."

One of the faith leaders who signed the statement is Charley Bazzell, minister at the University Church of Christ. He said moving the monument is by no means a solution to issues involving race. But he said it would be a step in the right direction.

"We're under no delusions that, 'Oh, we've done that. Check that off. Now, let's move onto something else.' There obviously needs to be much more work and dialogue, conversation, listening to try to bring people closer together," said Bazzell. "So this is just one small step in a very long journey toward better race conditions and racial reconciliation, and loving neighbors and getting along."

Rudy agreed that having more dialogue is the goal.

"I hope it will accomplish an openness to have dialogue about history, not to cancel or to remove things from our story, but to actually unpack more of it, so we realize both the good and the bad that has happened in the midst and in the wake of our story. I'm hoping that we will be having empathy and sympathy as well toward those who may view things differently," said Rudy. "My hope is just that we will hear the voices of those who have frequently been silenced or unheard."

Another faith leader who signed the statement calling for the relocation of the monument is Rev. Dr. Renee Meyer, the pastor at First Presbyterian Church of Murray.

"The potency, the narrative that goes with that statue's symbolism brings all kinds of pain, especially on the courthouse lawn," said Meyer. "What that says to a person of color, in my view and in the view of many people of color, is that you're not expected to get justice here because those monuments were erected to say in the Jim Crow South, that you folks, you African Americans, you need to know your place, and your place is not a place of equality with white folks. It is a place way below. And so you need to remember that. And it is a place of oppression. Because separate was not equal."

Meyer referenced some recent events across the country to explain why she decided to sign the message.

"It comes with much more pain even today since Charlottesville, since Charleston, when Neo-Nazis and white supremacists march. And anyone with eyes saw the news, and those statues are now associated with that vitriol and pain renewed," said Meyer. "So in my view, as a minister of the gospel, as a leader in the faith community, they must go, and we must voice that. As someone who follows the model of Jesus of Nazareth, I don't — it's my personal conviction that I cannot stand by and remain voiceless."

The renewed push to remove the monument began when Murray resident Sherman Neal II sent a letter to local leaders on June 1. In the letter, Neal wrote, "The erection and maintenance of the Robert E. Lee Confederate memorial statue located on the courthouse square is an affront to all residents who support notions of equality and value the American justice system."

Since then, Neal's cause has gained support from Murray State University, where he works as an assistant football coach. The school, along with various departments and faculty members, have said they support moving the monument. The Murray City Council also passed a resolution requesting the Calloway County Fiscal Court to take action in relocating the monument.

But during its meeting last month, the Calloway County Fiscal Court passed a resolution that says the Confederate monument stays put.

The resolution says the fiscal court is "mindful of the negative connotations that the monument may hold" and that the court "unreservedly condemns the past evil of slavery and the oppression of any American, past, present or future based on the color of his or her skin by any individual or institution." The resolution goes on to say the fiscal court believes the purpose of the monument was to honor the people in Calloway County who fought for the Confederacy during the Civil War, citing the phrase, "In Loving Remembrance," that is inscribed onto the granite.

Rudy said once there is enough support from faith leaders, the goal is to bring their message to the fiscal court, and hopefully change some minds.

"My hope is that our county leaders would reconsider what, we as leaders of faith at least, believe would be in the best interest of our town moving forward to progress our community in a way that will, we believe, be more attractive for people to come to the university, to come and establish businesses, and to grow forward in a friendly atmosphere," said Rudy.

Click here to read the full statement from faith leaders.