CARBONDALE, IL — The Carbondale Police is responding to an accusation that the department intentionally misgendered a transgender woman who was arrested on Sunday.

In that news release, the police department used that individual's legal name, and referred to the person by masculine pronouns. Monday evening, the Rainbow Café LGBTQ Youth Center in Carbondale released a statement saying that the person who was arrested is a transgender woman, and that "the Carbondale Police Department initially misgendered and deadnamed the woman." Deadnaming is a term for the practice of using a transgender person's birth name without their consent.

In an update released Tuesday afternoon, the Carbondale Police Department says the person who was arrested never told officers she was transgender, and did not say that she prefers to be called by another name.

"On Sunday evening an individual was arrested for criminal damage to property and a news release regarding the incident was disseminated. Following the news release there has been concern expressed from the LGBTQ community and others regarding the misgendering and deadnaming of the individual who was arrested. Specifically, those concerns include information that the individual is, and/or identifies as, a transgender female with a different name.

"Subsequently, an internal review was conducted and has determined that the individual arrested provided only one name at the time of arrest, along with specific personal identifiers associated with that name."

The police department goes on to write that the name the department provided to the public "matches national law enforcement database records and is the name included in the original news release."

The news release goes on to say:

"At no time during police custody did the arrestee acknowledge to the Carbondale Police Department that they were transgender or preferred being called by another name. Although we are not aware of any other legally registered name, we are certainly willing to include or correct any information which was previously provided, but that personal information would have to be provided by the person arrested.

"We value the relationships we have with our residents and all of our community groups, including our LGBTQ community. We remain committed to working with, and will continue to support the rights of all of those who are a part of our diverse community."

In the same incident in which the woman was arrested, three other people were pepper sprayed by a police officer. In its statement, the Rainbow Café said "there is never an excuse for excessive use of force," and that members of the center's board of directors "are dismayed that after our event commemorating the Stonewall Uprising of 1969, a trans woman suffered this experience at the hands of the police, and other individuals from the LGBTQ community were pepper sprayed."

The Carbondale Police Department did not address the center's other accusations in Tuesday's news release.

To read the Rainbow Cafe's full, two-page statement, download the document below. 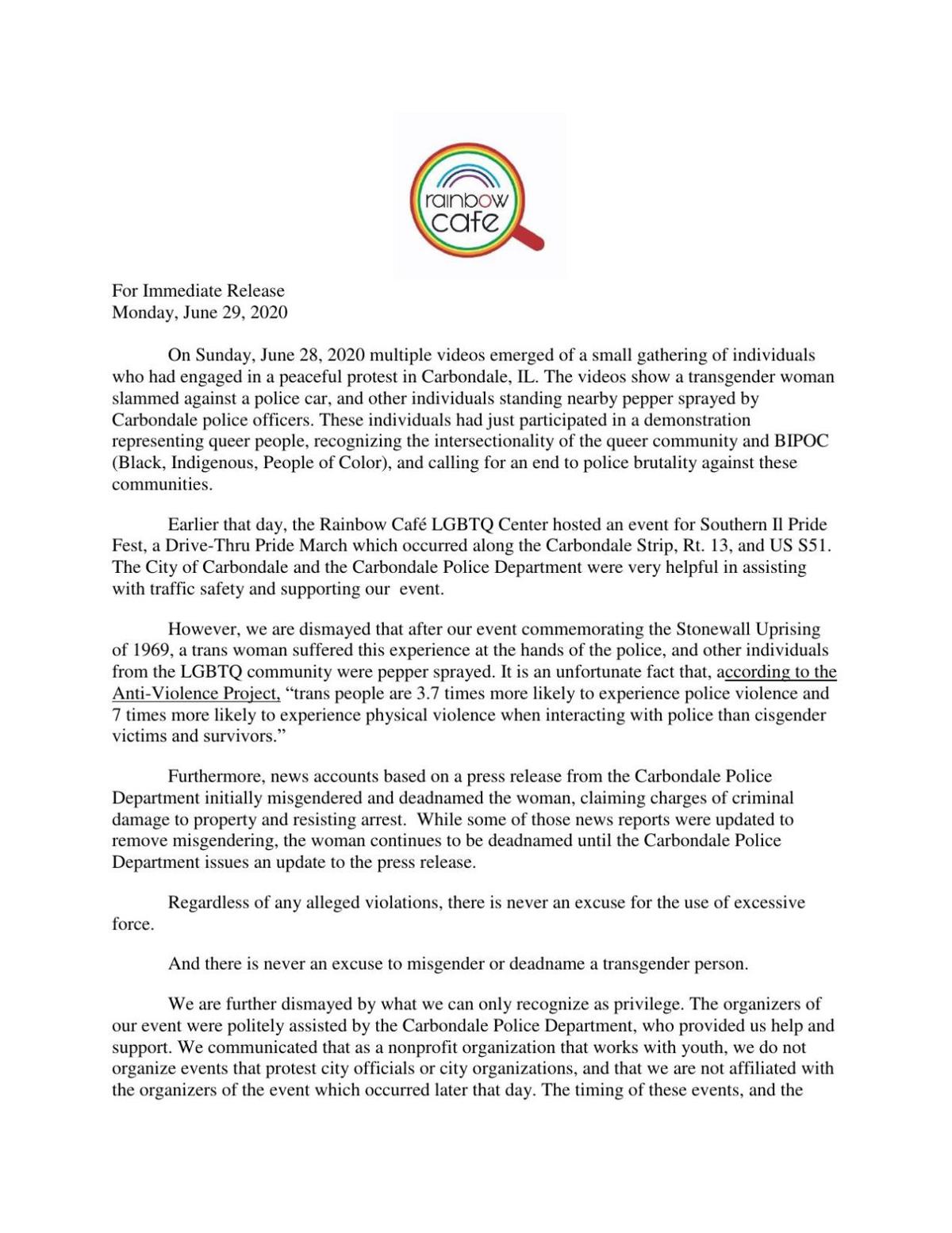