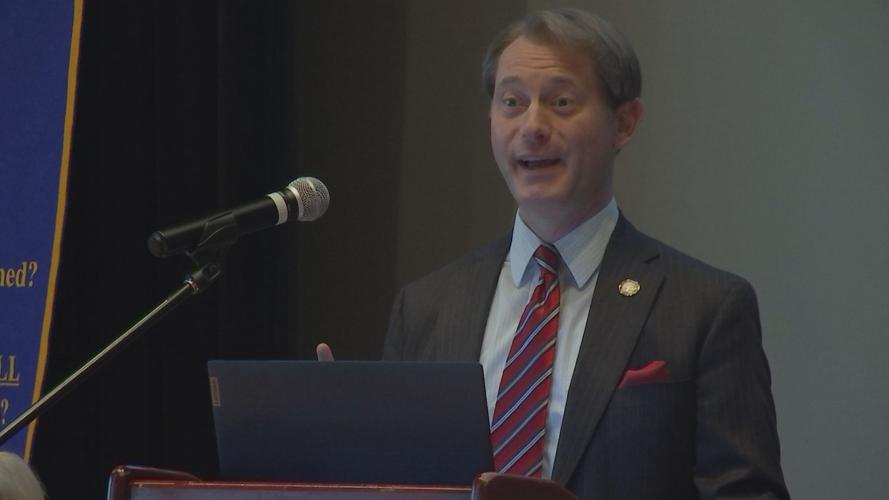 Secretary of State Michael Adams (R-KY) speaks to members of the Paducah Rotary Club on Wednesday. 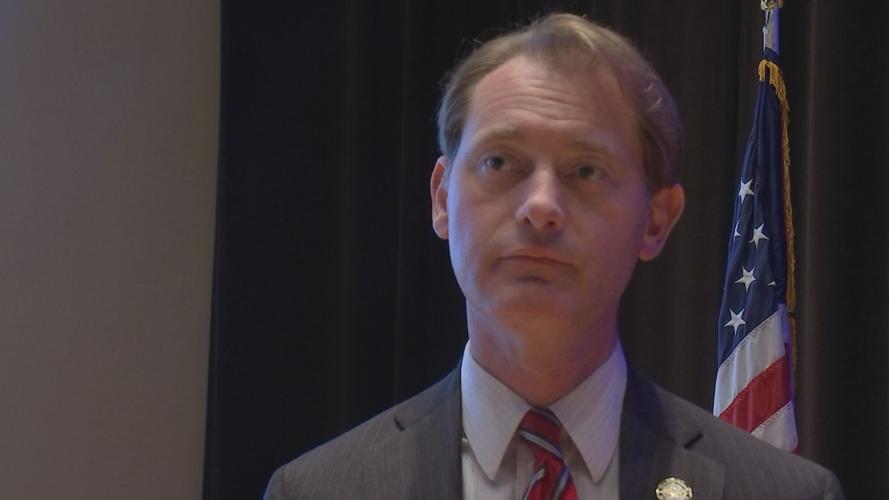 Adams says he is concerned about conspiracy theorists making it hard for county clerks to attract and retain poll workers.

PADUCAH — Months ahead of the midterm election in Kentucky, Secretary of State Michael Adams continues to find himself combating election conspiracy fallout from the 2020 election and the primary in May.

That is some of what he shared with an audience Wednesday as guest speaker at Paducah Rotary Club's weekly meeting at the Carson Center.

Over recent weeks, Adams has been vocal on social media to shut down false claims of violations to voter integrity in Kentucky.

"I am really concerned about these conspiracy theorists making it harder for us to get poll workers. I don't want poll workers to feel like they're having to sit there, it's a long day as it is, and then have angry people come up and accuse them of fraud. It's ridiculous," Adams said.

Adams himself has been the target of baseless claims accusing him of overseeing voter fraud. Just last week he reported another death threat he had received to the Federal Bureau of Investigation.

Adams also voiced concern at an up-tick in demands for a recount following an election.

"What I don't want to have is abusive process for people who lost by a landslides demand recounts. Recounts are far more demanding on our county clerks and our election officials. They put a great strain on our process. They mean that we can't use the machines for voting because they're locked down. We've had five county clerks in the state resign in the last month alone, because, it's not just one thing, but in part it's the abuse they're getting from people and the absurd demands that they're getting from people," Adams said.

He said one of the ways he can thwart disinformation about alleged election irregularities is by traveling the state and talking with people one on one.

"All I can do is handle Kentucky. All I can do is talk to Kentuckians about what Kentucky does right. We've got a great record. We've made enormous strides improving our process that last few years making it more accessible, making it more secure, banning practices that have led to fraud in our state and other states, requiring an ID to vote, but also expanding access for our voters so they can go vote more easily. Not just having one arbitrary day but multiple days to pick to go vote," Adams said.

Adams said the environment surrounding voting in elections, both statewide and nationally, is making it difficult for him and county clerks to attract poll workers. He said as the current crop of poll workers start to age out, it's hard to attract and retain younger generations to volunteer.

Adams is seeking a second term in the 2023 general election in Kentucky.