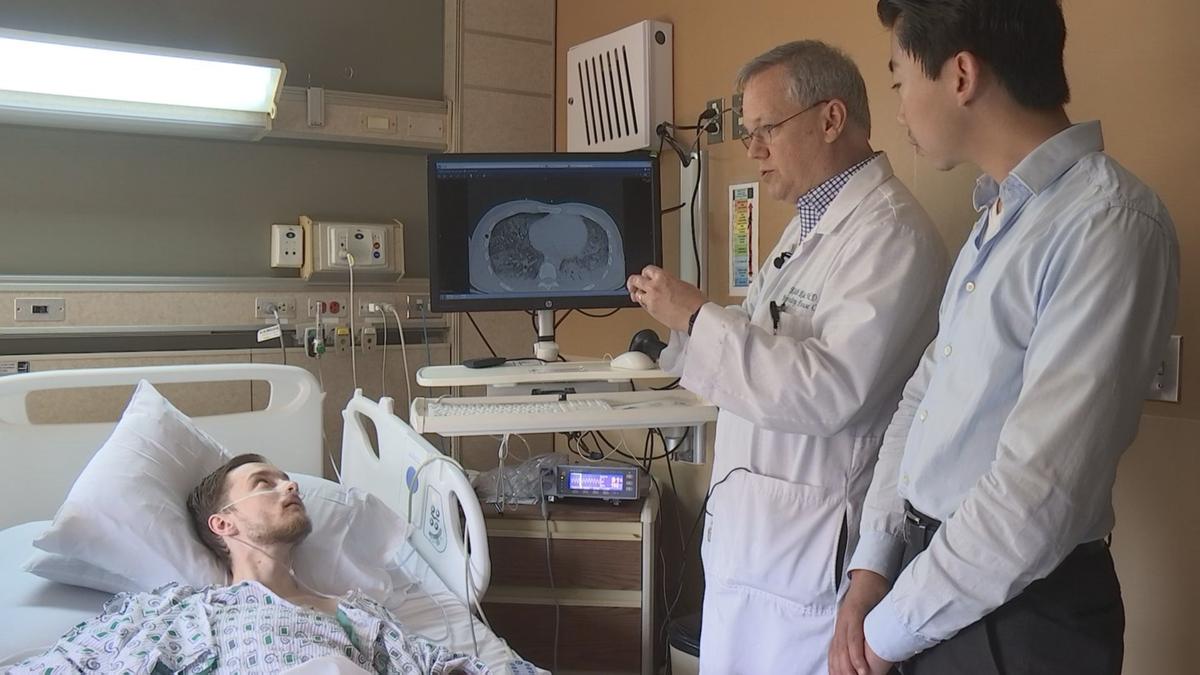 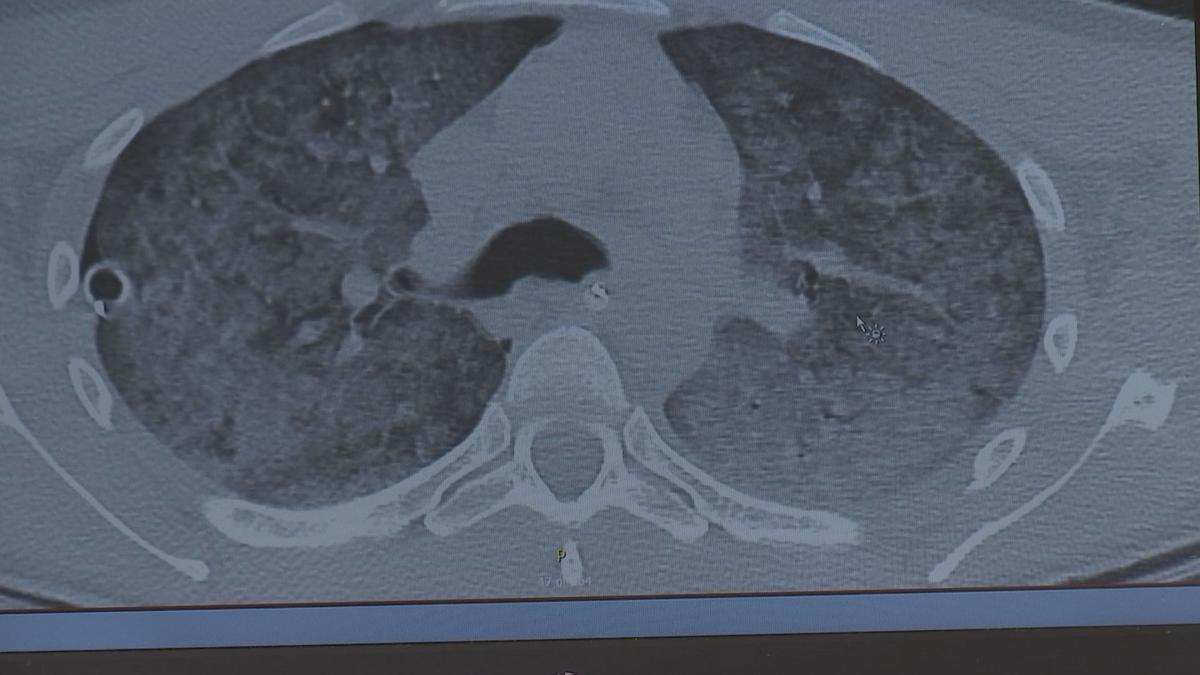 Dr. Kelly says the grayish hazy areas show parts of the lungs affected by the damage. 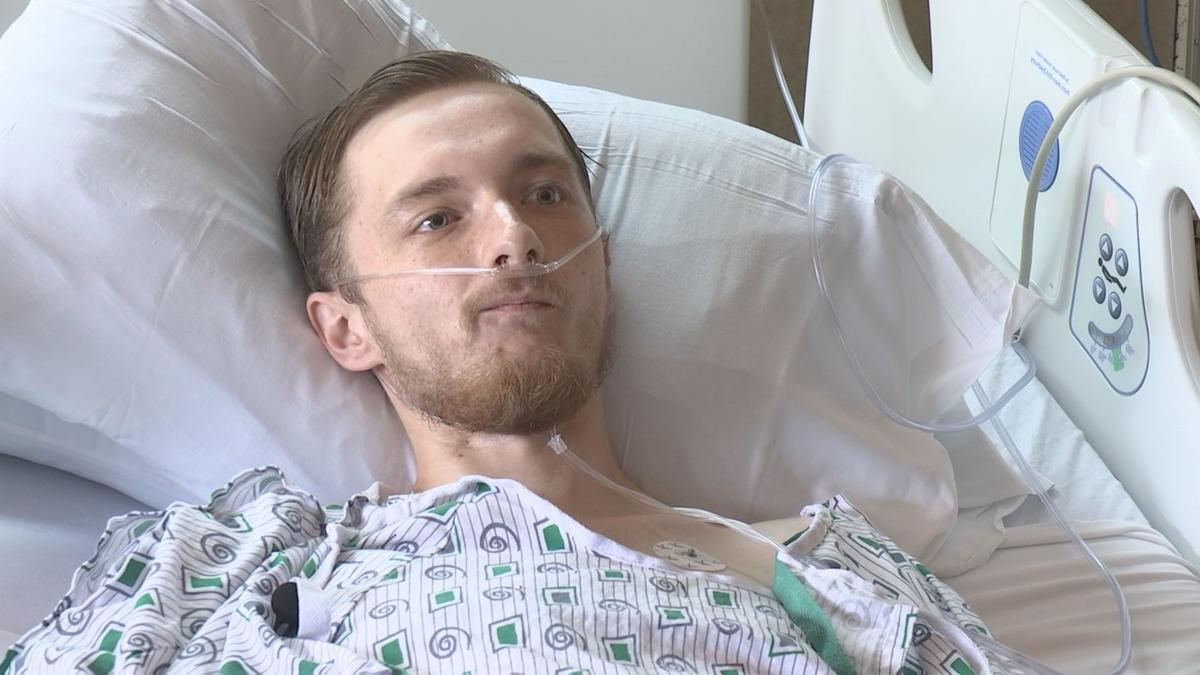 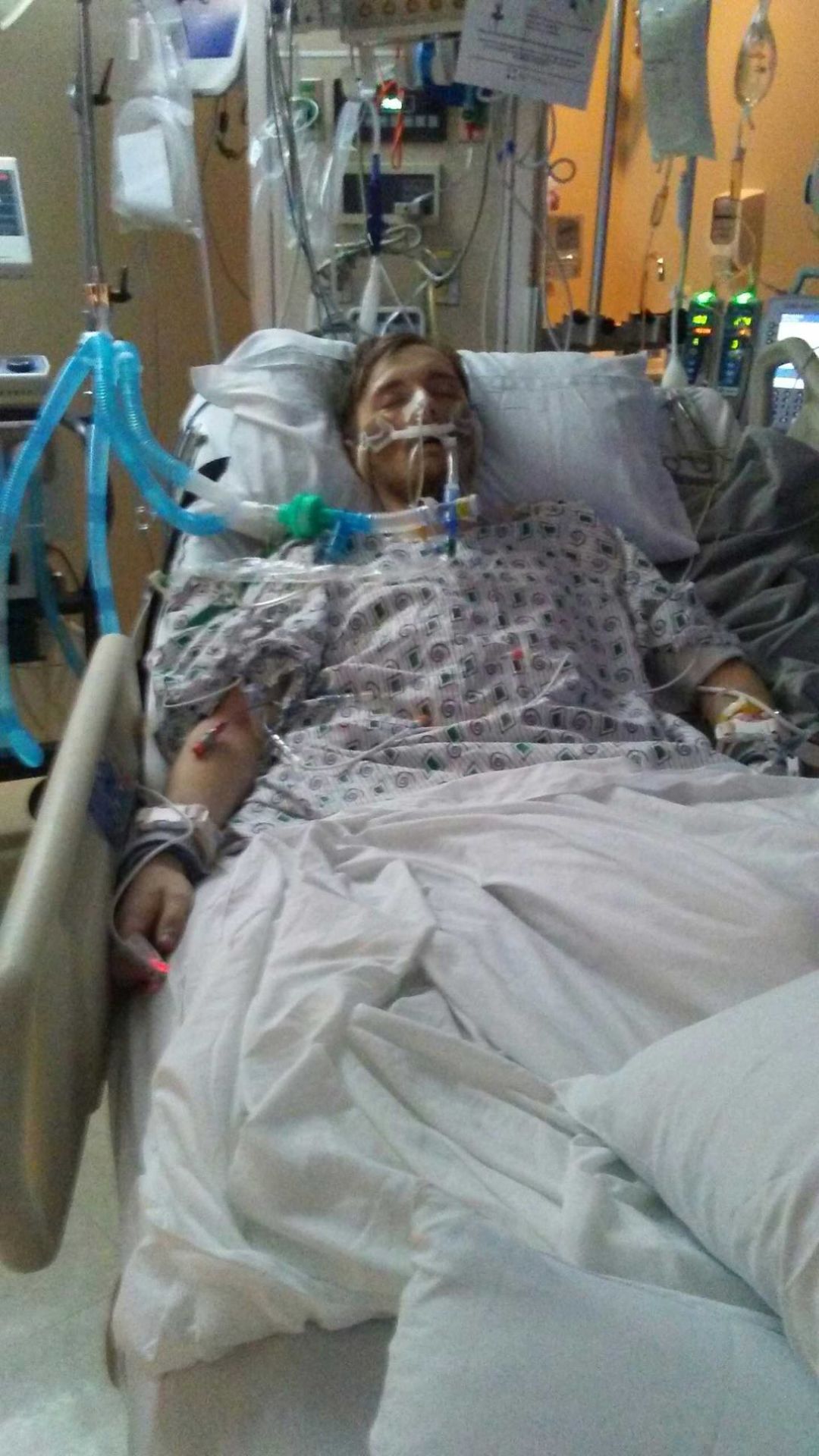 Eli Sirls was put on a ventilator for several days.

PADUCAH — A west Kentucky man who had to be put on life support after vaping THC hopes his story can help prevent others from going through the same ordeal.

Eli Sirls, a 23-year-old Marshall County man, said he had been vaping THC for about a month. But he became ill after buying a cartridge on Aug. 30 from a friend, who had bought it from a manufacturer. Sirls said that cartridge made him "cough (his) lungs out" every time he used it.

Sirls said on Labor Day, Sept. 2, he had nausea, vomiting and a 103-degree fever. The next day, he vomited nonstop. He was later admitted to Baptist Health Paducah, where he was treated and discharged on Friday, Sept. 6.

But, just hours later, Sirls said he began feeling bad again and was having rapid breathing.

"Couldn't eat, just cause I couldn't — didn't have any breath, didn't have the energy," Sirls told Local 6.

Sirls said his mother brought him back to the Baptist Health emergency room on Sunday, Sept. 8. His lung collapsed that night, and he was put on a ventilator from that time until Wednesday morning.

Dr. Keith Kelly, a pulmonologist at Baptist Health, said while Sirls was on life support, hospital staff administered specialized aerosol respiratory treatments that were blown through the ventilator circuit down into the lungs. Kelly said staff also had to use the ventilator to raise airway pressure, to force oxygen into Sirls' bloodstream. Because Sirls had a collapsed lung, hospital staff inserted a tube to draw it back up.

"I just hope nobody ever has to go through what I went through," said Sirls. "I wouldn't wish this on my worst enemy."

Kelly said a CT scan showed that the majority of Sirls' lungs appeared grayish on the image, indicating areas that have fluid, debris and inflammation. Kelly said Sirls' lungs looked like they were 150 years old, not 23.

"This hazy haze all through both lungs, that's very abnormal, and that is basically the areas of the lungs that are affected by the damage. A normal CAT scan would have lungs that are almost the color of this black background all through," said Kelly. "These lungs were not able to sustain life on their own, which is why he needed to have the ventilator to support his breathing."

Sirls said after he was off the ventilator, his lung collapsed a second time while he was walking as part of physical therapy. Since then, he has gotten a lot better. When Local 6 talked with Sirls on Monday, Sept. 16, he said even though he felt a bit of tightness when taking deep breathes, he was "feeling great" overall.

Kelly said although Sirls may have some slight scarring on his lungs, he's expected to make a full recovery. Sirls will likely remain at the hospital for several more days.

"90% of all of this is the body being able to repair itself," said Kelly.

Sirls hopes his story can be a cautionary tale to others.

"I'm lucky, lucky to be alive. And, as I keep saying, if I can help one person, just get one person to stop what they're doing, it would mean a lot," he said. "If you don't do it for yourself, do it for the ones who love you."

Sirls said he feels blessed to have a family that has been with him throughout the whole ordeal.

Kelly said this is the first vaping-related lung illness being treated in Paducah that he's aware of.

The Centers for Disease Control and Prevention says as of Sept. 11, 380 cases have been reported from 36 states — including Kentucky, Illinois and Tennessee — as well as the U.S. Virgin Islands. The CDC says the latest number includes only confirmed and probable cases reported to the agency. There are six confirmed deaths.