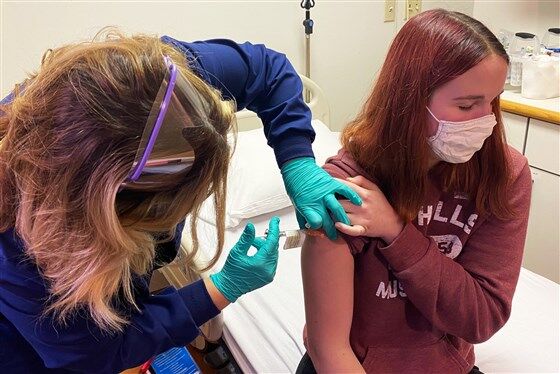 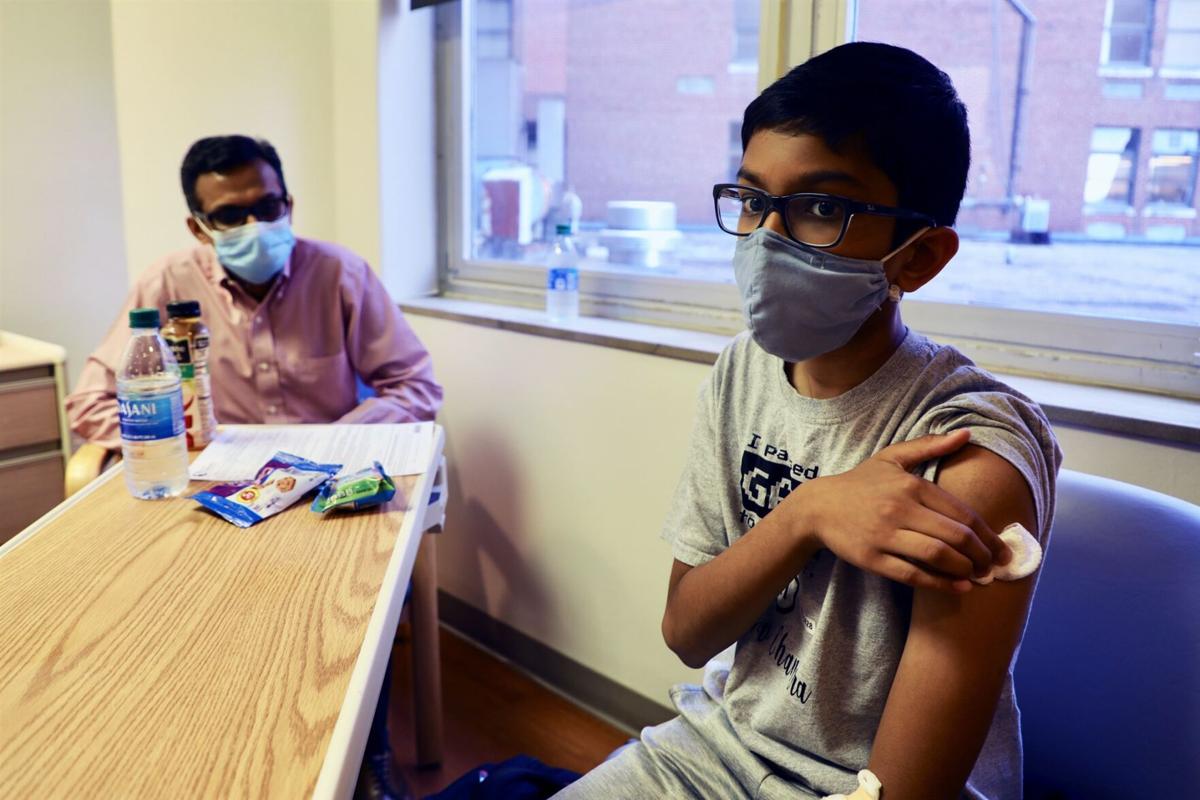 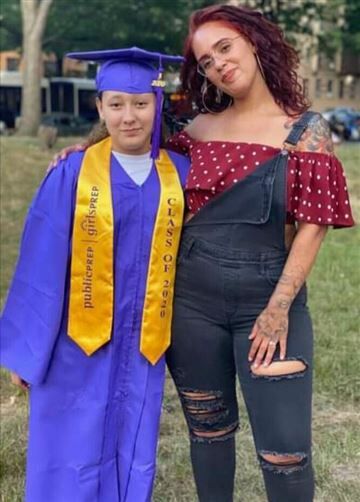 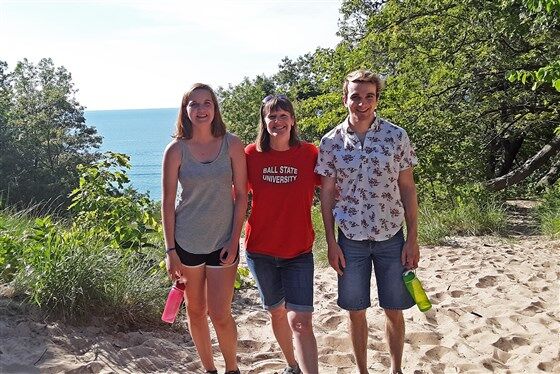 Laurie Evans with her children, Katelyn and Andrew.Courtesy Laurie Evans

When Abhinav, an Ohio seventh grader, learned that a Covid-19 vaccine trial near his hometown was enrolling children, he wanted to participate. But there was one aspect of the study that had him worried.

“I was mostly a bit nervous about the blood draws, because I had one about five years ago, and it wasn’t so comfortable,” Abhinav, 12, said.

Nonetheless, he decided to enlist in the trial, which is run by Pfizer Inc.

“I think that it could really benefit the world, and I think it could also help scientists know more about the coronavirus,” said Abhinav, whose family asked that their last name not be used to protect their privacy.

Abhinav received his first injection at Cincinnati Children’s Hospital Medical Center last Thursday, making him among the youngest participants in the world to take part in a Covid-19 vaccine trial. His father, Sharat, a bone marrow transplant physician, had already been in the trial himself, and encouraged Abhinav to sign up after experiencing no ill effects other than a fever that lasted for a day or two.

“I’m happy that he’s doing his bit for science,” Sharat said of his son. “With the Pfizer study, no major side effects have been reported so far, so that made me comfortable with enrolling Abhinav as well.”

Earlier this month, Pfizer became the first pharmaceutical company in the United States to receive approval from the Food and Drug Administration to test its vaccine on children as young as 12. The kids who have signed up say they are proud to be participating — and say they feel safe doing so.

"I wasn’t thinking about my permanent health for a short-term inconvenience.”

“They were talking about symptoms, and they were just fatigue, low-grade fever, headache. I was thinking, ‘I hope I don’t have anything like that because I don’t want it to mess with school or work,’” Katelyn Evans, 16, of Green Township, Ohio, said. “But I wasn’t thinking about my permanent health for a short-term inconvenience.”

Like most of the other coronavirus vaccine trials, Pfizer’s involves getting two shots. Participants are given the shots three weeks apart and then have their health monitored for two years by researchers. The participants do not know whether they are receiving a placebo injection or an actual Covid-19 vaccine.

Either way, the youngest trial volunteers say they have confidence in the vaccines that are being developed — putting them at odds with many adults across the country.

Manufactured during a highly politicized pandemic in a matter of months versus the years or decades that a vaccine typically takes, the Covid-19 vaccines have prompted growing skepticism. A survey in October from Stat News and the Harris Poll found that only 58 percent of the American public would get a vaccine when it becomes available, down from 69 percent of those polled in August.

But researchers say the vaccines they are testing are safe.

“There is a perception that corners are being cut. That is the perception; it’s not the truth,” said Dr. Robert Frenck, director of Gamble Vaccine Research Center at Cincinnati Children’s and the lead site researcher for the Pfizer trial there. “It’s not that anyone is doing anything less, it’s just more compressed.”

Pauses in other trials, including those of AstraZeneca and Johnson & Johnson, show that proper safety protocols being observed across the board, Frenck said. Both AstraZeneca and Johnson & Johnson recently resumed their studies in the U.S. after briefly putting them on hold to investigate whether an adverse event in a participant was related to the vaccines — something experts say is common in large-scale trials.

Pfizer has not reported any unexpected illnesses among its participants, and has said it could be ready to apply for emergency use authorization of its vaccine by late November.

For the study in Cincinnati, one of several Pfizer sites testing children, dozens of parents contacted by researchers were eager to get their kids involved, Frenck said.

“Parents were asking how many times they’re going to have to come in, how many doses it would have to be,” he said. “But it hasn’t been, ‘Oh, heck no.’”

Why include children if they are least likely to get ill?

While the parents of the children in the trial are comfortable with the level of risk they are assuming, others find it mind-boggling that children are being asked to enroll.

Bianca De La Cruz, 33, a paraprofessional for the New York City Department of Education, works with elementary school students and has a 13-year-old daughter. She said she feels Pfizer is using children as “guinea pigs.”

“We really don’t even know much about Covid to begin with, and then to be testing a vaccine that they developed within six months? It’s crazy.”

“It’s absurd,” she said. “We really don’t even know much about Covid to begin with, and then to be testing a vaccine that they developed within six months? It’s crazy.”

Pfizer argues otherwise. The decision to include children came only after the pharmaceutical giant gathered "satisfactory" safety and efficacy data on adults and older adolescents first, Jerica Pitts, Pfizer's director of global media relations, said. In September, Pfizer expanded its study from 30,000 adults to about 44,000 people, which included teenagers as young as 16 and individuals with chronic conditions, such as HIV and hepatitis B and C. After receiving FDA approval to test younger children and reviewing the data on the 16- and 17-year-olds, Pfizer added children ages 12 through 15.

Opponents like De La Cruz still question why kids need to be part of the study. Children generally fare much better than adults when they catch the coronavirus, and the science still is murky on whether children, especially those under the age of 10, transmit the virus as easily as adults do.

Yet, the American Academy of Pediatrics believes it is crucial for children to be in vaccine trials. On Sept. 29, the group wrote a letter to Secretary of Health and Human Services Alex Azar and FDA commissioner Dr. Stephen Hahn urging them to allow children to be tested, pointing out that more than 587,000 cases of the coronavirus have been reported in children.

“While the likelihood of spreading the disease may vary among different aged children, we know that children can and do spread the virus to household members, grandparents, teachers, and other children,” the letter said. It added, “Children must be included in vaccine trials to best understand any potential unique immune responses and/or unique safety concerns.”

Dr. Yvonne “Bonnie” Maldonado, a professor of pediatrics, epidemiology and population health at Stanford Medicine, is among those who support children being in Covid-19 vaccine trials.

“We really feel that while, at this point, it doesn’t appear that Covid-19 is really targeting the pediatric age group, children are not immune to this disease,” she said, pointing out that while children only comprise about 10 percent of the coronavirus cases in the U.S., and typically display milder symptoms than adults, more than 100 children have died in this country from the virus.

And it is possible that children may respond differently to the vaccines than adults do.

“Our belief would be you would get the same kind of response in children,” Frenck said. “But you won’t know until you test for sure and if you need to change the dose, the number of doses — we need to know that so we’re making sure we’re giving the right vaccine at the right time.”

‘Pride’ in contributing to medical research

Katelyn, the Ohio 16-year-old, did not have any side effects from the shot she received.

“It’s really not scary. There’s nothing dangerous or intimidating about it,” she said, adding that she hopes others her age join the study.

Katelyn’s mother, Laurie Evans, an elementary school teacher, said most friends and family members were supportive of Katelyn’s decision to join, although some questioned whether it was safe to get a vaccine developed at record speed.

“She’s got a big heart. She obviously had no fear of this,” Evans said. “I guess I’m more afraid of Covid than I am of the vaccine.”

Other parents whose children have participated in medical research say they felt the same way.

Heather Hannon, 48, an oncology nurse practitioner who lives in Chesterfield, Virginia, signed two of her children up for a late-stage vaccine trial for H1N1, or swine flu, during that pandemic in 2009. Her kids, 16 and 14 now, were just 5 and 3 at the time, and Hannon used the opportunity as a teaching moment for them.

“It was excitement, it was pride, it was an understanding that life is about more than just you,” Hannon said.

“I imagine many parents these days would think I was quite nuts,” she added. “But I think the thing about a clinical trial is there are lots of safety mechanisms built into that, so you’re not totally in the dark, and it’s really exciting to be involved in research.”

Sharat, the father of 12-year-old Abhinav who is participating in Cincinnati Children’s Covid-19 vaccine trial, hopes his son will feel the same sense of helping others that Hannon’s children did.

“While most kids are going to do fine if they’re exposed to Covid, a small portion might get very sick, and up front, we don’t know who is going to get very sick,” Sharat said. “By being part of this study, we help others. It’s a small contribution to the field.”