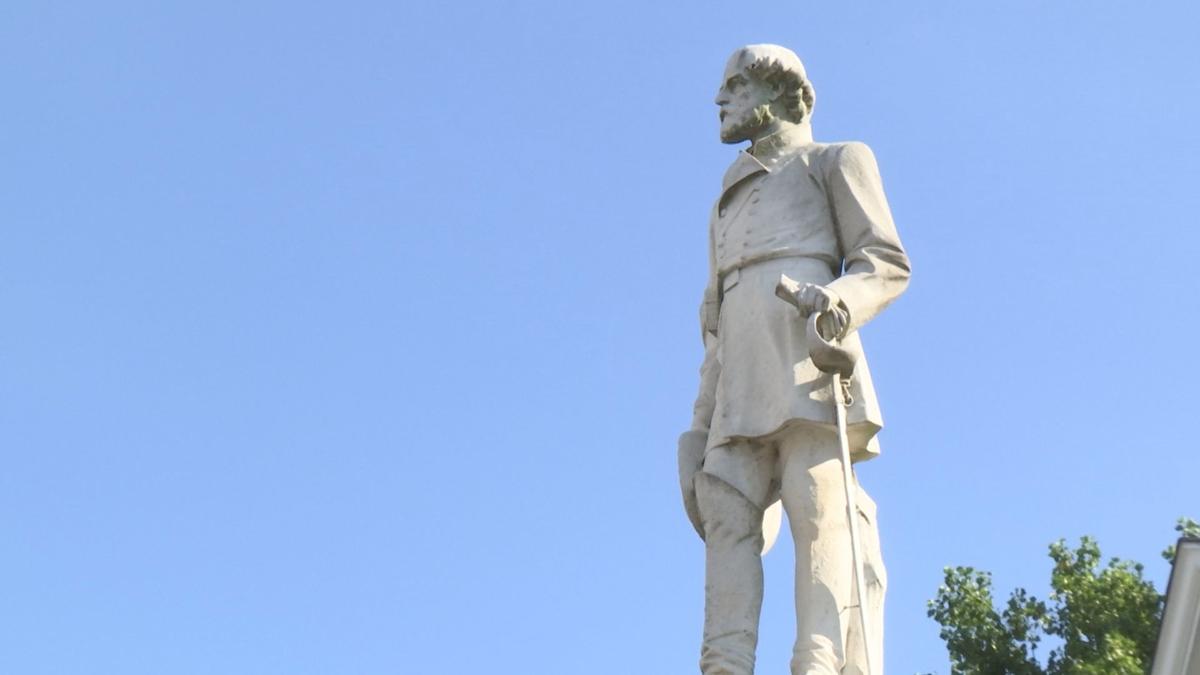 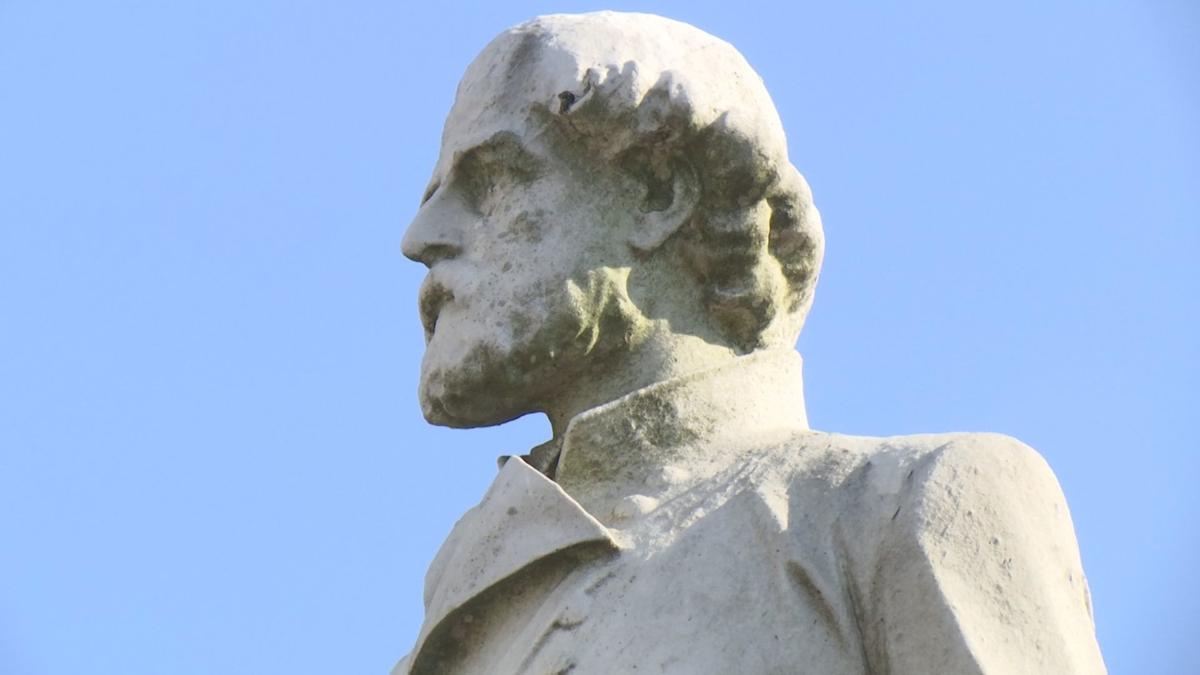 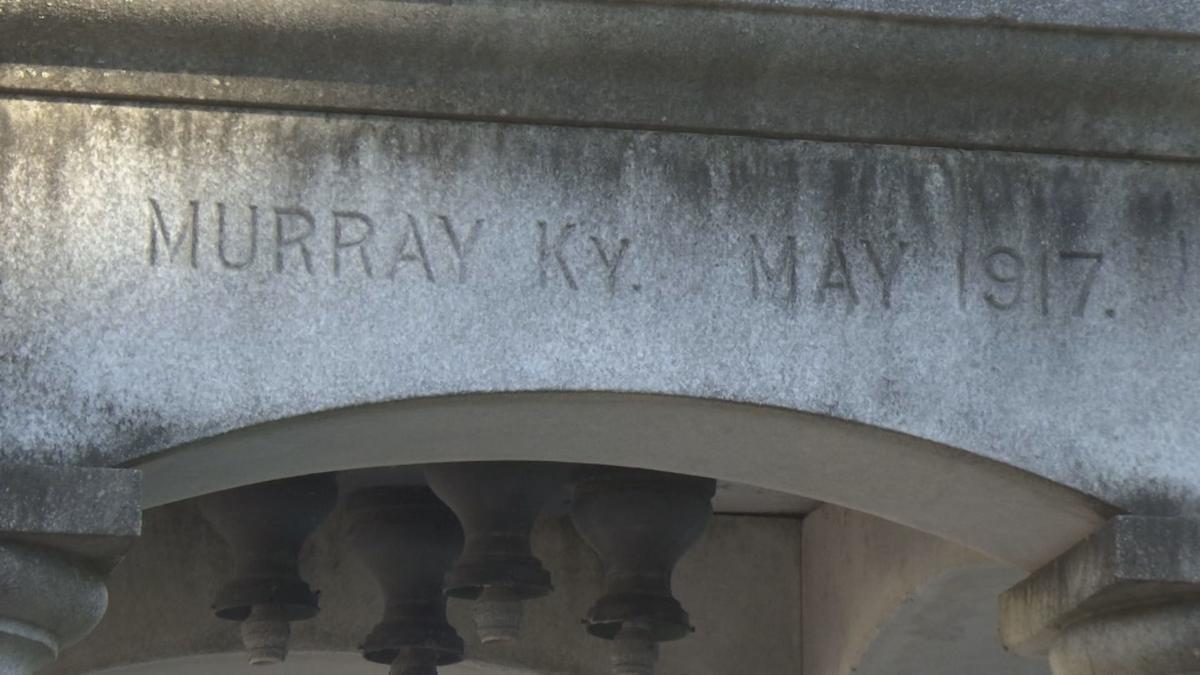 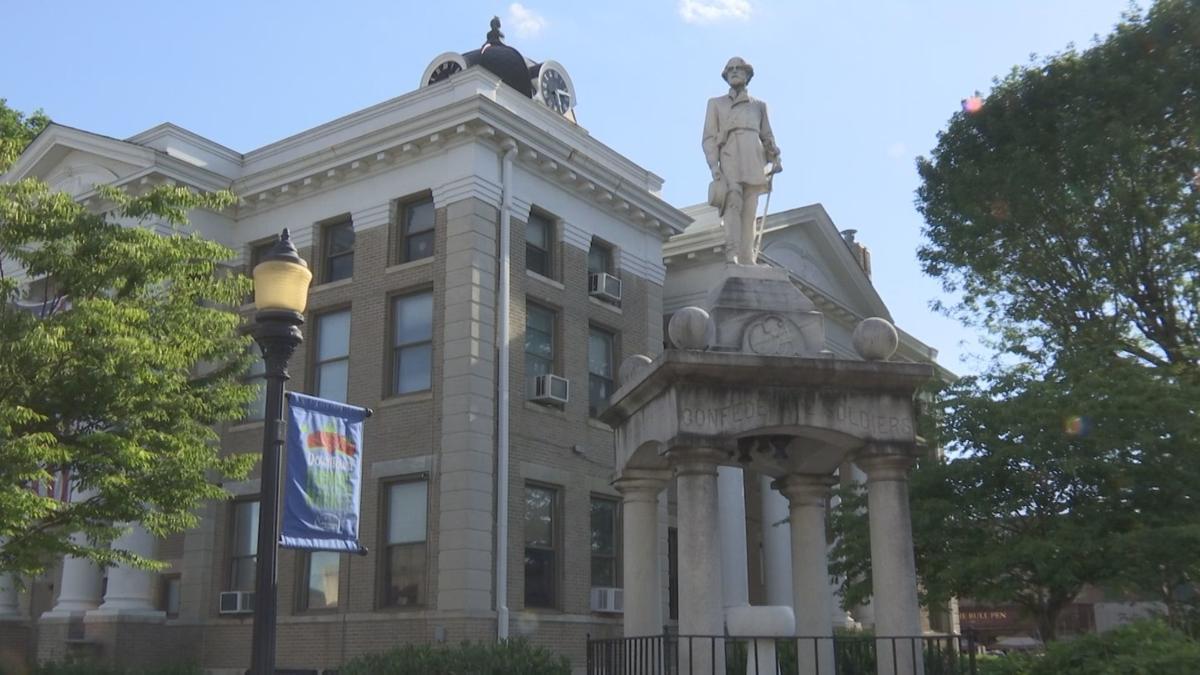 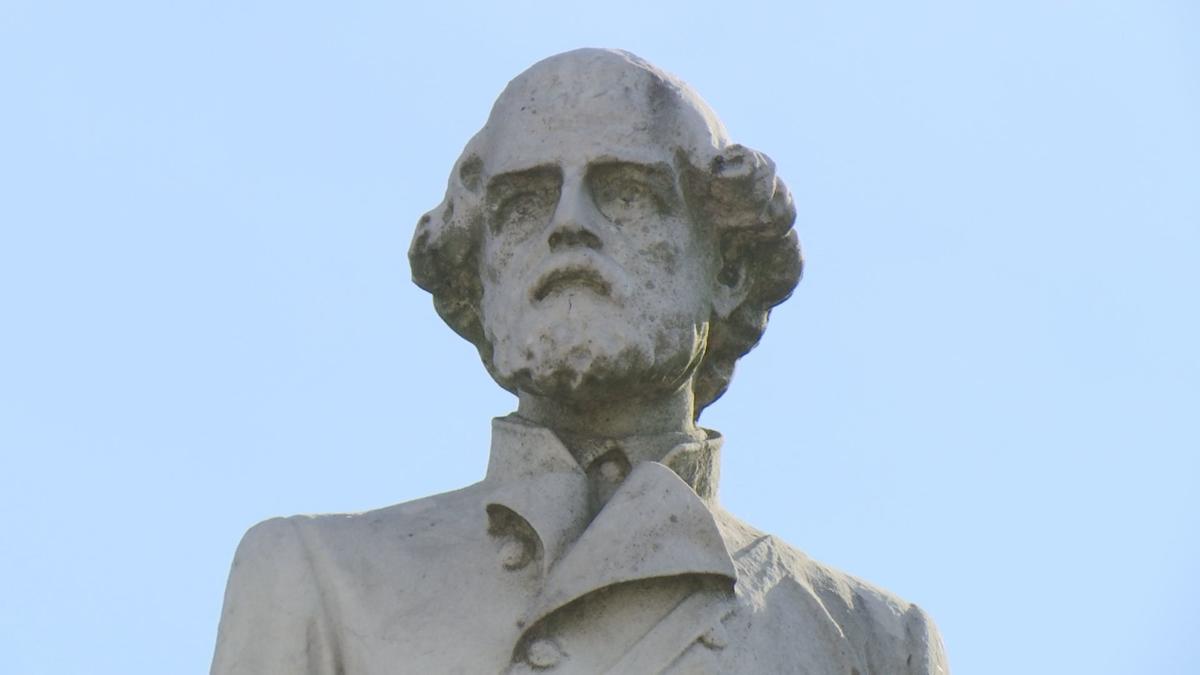 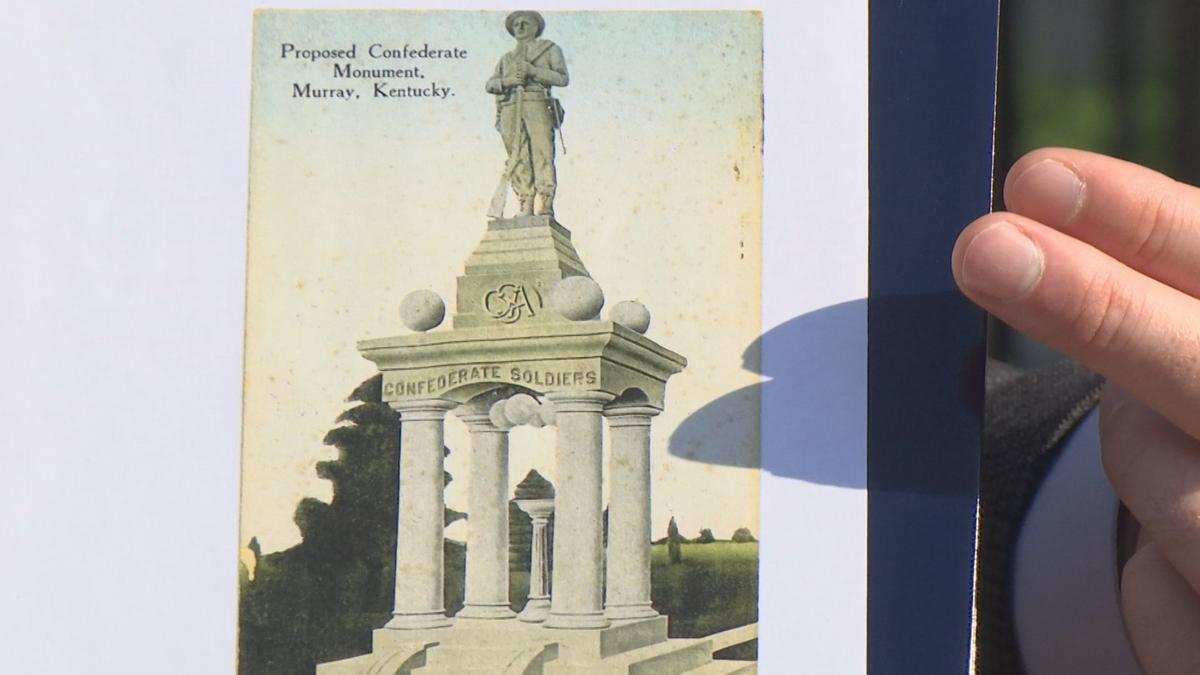 Elliot shows an image of what the monument was originally designed to look like. It featured a generic Confederate soldier instead of Robert E. Lee.

"A resolution requesting the Calloway County Fiscal Court take necessary action and seek all required approvals to expeditiously remove and relocate the 'Confederate Soldier' statue located on the northeast corner of the Calloway County Courthouse property for its preservation."

After the unanimous vote Thursday, Mayor Bob Rogers said: "I'd like to commend the group for their work on the resolution. I went home and told my wife that I saw an example of how decisions should be made today. I sat in on the meeting, and the conversation and the dialogues between quite a diverse group. They respected everyone's comments and opinions, and they reached a consensus on every issue. It made me proud to see them work together like that, as it makes me proud to see you take a stand and be unanimous in your commitment to what you think is best for our city."

The renewed push to remove the monument began when Murray resident Sherman Neal II sent a letter to Rogers and other local leaders on June 1.

In the letter, Neal wrote, "The erection and maintenance of the Robert E. Lee Confederate memorial statue located on the courthouse square is an affront to all residents who support notions of equality and value the American justice system."

Rogers later released a statement, saying the city of Murray has "no jurisdiction or control over the Robert E. Lee Confederate Memorial" because the city does not own the statue and it's on county property.

Neal then brought the issue to county leaders. During the Calloway County Fiscal Court meeting last week, Sherman said he understands that the Kentucky Military Heritage Commission had designated the memorial as a military heritage object, which means it cannot be removed without the consent of the commission. Neal called for the fiscal court to get that process started.

However, Judge Executive Kenny Imes said the fiscal court could not make a decision just yet because they have to review more information and sift through legal issues.

On Wednesday, Imes sent the following statement to Local 6:

"When dealing with any property listed on the National Register of Historic Places, multiple stakeholders and governmental entities have to become involved in the process of dealing with the property. No one or governmental organization, unilaterally, has the legal ability to do anything to or with the property. This is true if a property or item is to be restored, removed, or even cleaned.

"In all cases, to do anything to or with that property or item requires the input and approval of a state government commissioner, and in the case of the Robert E. Lee statue, more than one.

"Calloway County remains committed to addressing the various concerns regarding the Robert E. Lee statue expeditiously, but within the bounds of the law."

"I ask that you direct Judge-Executive Imes and Calloway County elected officials to expedite a decision on this matter and monitor procedures to ensure transparency and proper application of legal theory," Neal wrote in the letter to Cameron.

Neal's efforts have received both support and opposition. Those who oppose Neal say the monument is part of history. In an online petition to keep the statue, which has nearly 3,000 signatures, supporters say, "It represents the hundreds of Confederate soldiers that fought in the Civil War, many related to our citizens of Murray, Ky."

But those in favor of removing the monument have signed their own online petition, which has nearly 10,000 signatures.

In addition, Murray State University, where Neal works as an assistant football coach, recently said in a statement that the university "firmly supports the relocation of the statue."

Kevin J. Elliott, an assistant professor of political science at Murray State, also sent a letter to Imes, detailing the historical context and background of the Confederate monument outside the courthouse, in order to help people make informed decisions. Elliot wrote in the letter that he has been researching Confederate memorials for some time, and recently began investigating the history of the Murray monument.

Elliott wrote that during his research, he reviewed "the monument's application to be listed on the National Register of Historic Places, examined the archives of the Calloway County chapter of the United Daughters of the Confederacy, and consulted scholarly histories of the monument building movement."

On Thursday, Local 6 asked Elliott about his findings.

Elliott said the monument was erected in 1917 by the Calloway County chapter of the United Daughters of the Confederacy (UDC), who raised money to make it possible. Documents from the National Register of Historical Places state the monument cost $2,500.

Elliott said the original concept drawing of the monument did not feature a Robert E. Lee statue. Instead, it featured a generic Confederate soldier, based on a postcard Elliott found among the papers of the United Daughters of the Confederacy.

Elliot said during his research, he discovered that there were three waves of Confederate monument building in the U.S. He said the first wave occurred immediately after the Civil War, the second happened between about 1910 and 1920, and the third was in the 1950s.

"Understanding that it was put up for the purpose of affirming the cause of the Confederacy rather than for the purpose of memorializing the Confederate dead is very important for understanding why people today would see it as problematic, especially as it being located in this public space," Elliott added. "Being located next to the courthouse is meant to show who power belong to in the Jim Crow South. It belonged to the heirs of those who fought for the Confederacy, not to those who identified with the Union or for those who saw the Confederate cause as dedicated to an unjust cause."

Elliott said during his research, he also discovered some information regarding the thoughts of a prominent UDC figure.

"Some have wondered what this monument has to do with racism and white supremacy," said Elliott. "What I found in the files of the Murray Chapter of the United Daughters of the Confederacy, who erected this monument, were a collection of speeches by Mildred Lewis Rutherford, who was UDC's chief historian and one of its most prominent public speakers. And in this speech, one of the speeches, Rutherford characterizes black people in terms that are — there's no other word for it — subhuman. And she also justifies slavery as a noble, civilizing institution for which the descendants of the enslaved people of the United States should be grateful. She also claims that the enslaved people of the Old South were the 'happiest people on the face of the globe.' These seemed to be the sentiments of the people who erected this monument."

"And indeed, if World War I had not intervened and prevented a gala unveiling that the UDC often used for its newly installed monuments, Rutherford might have been invited to deliver sentiments like those on the steps of the Calloway County Courthouse," Elliott continued. "And that's the kind of history that we face when we view this monument. And it's up to us to decide today whether this is the story we want to continue to tell."

Elliott said he's not surprised that Murray State faculty members have written letters about the issue.

"That is I think, one of the best roles for academics, is to serve as public educators. And I think this is one of those cases where an awareness of the history and the historical context is a very important part of the public debate here," said Elliott. "It's very important that we have a cordial public debate that is informed by the history. No one is going to win. This is a debate about what we want our community to be about. And in that sense, this is, I think a good instance, or is potentially an instance for our community to discuss how we view this piece of our history and what it means for us, and for us to take a collective action that makes sense, given the views and feelings of everyone in the community."

Kevin Elliot's letter on the historical context of the Confederate monument: 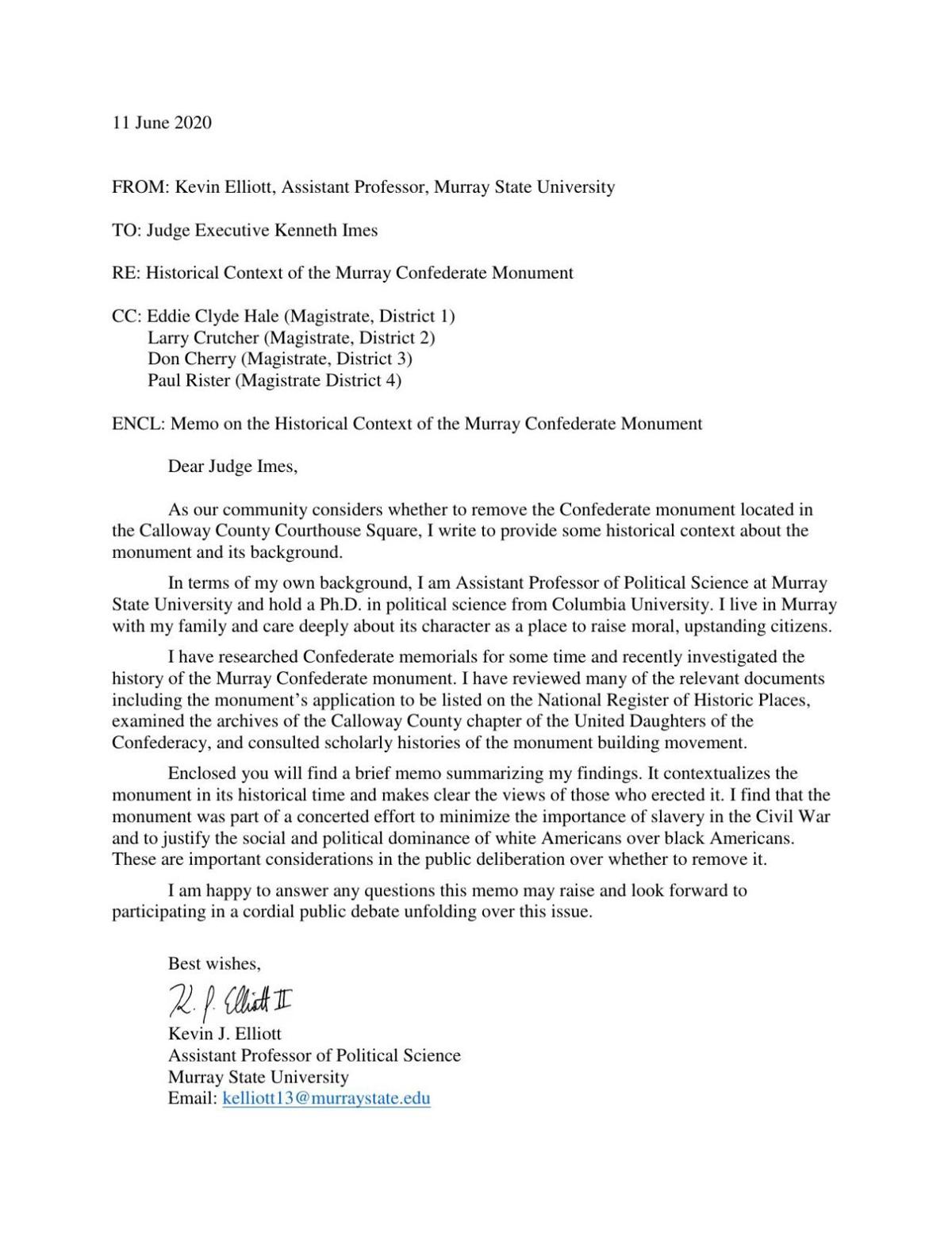