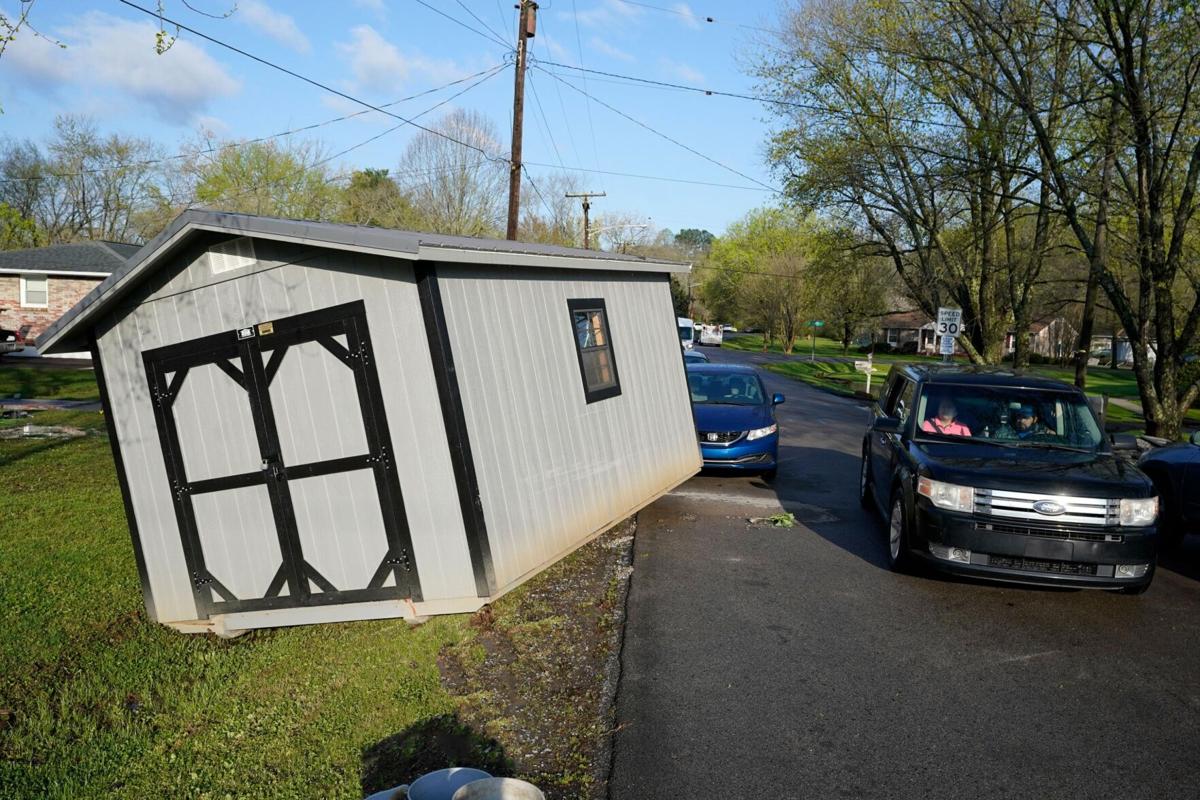 A vehicle passes a utility building that was carried onto a street by floodwaters on March 28 in Nashville, Tenn. 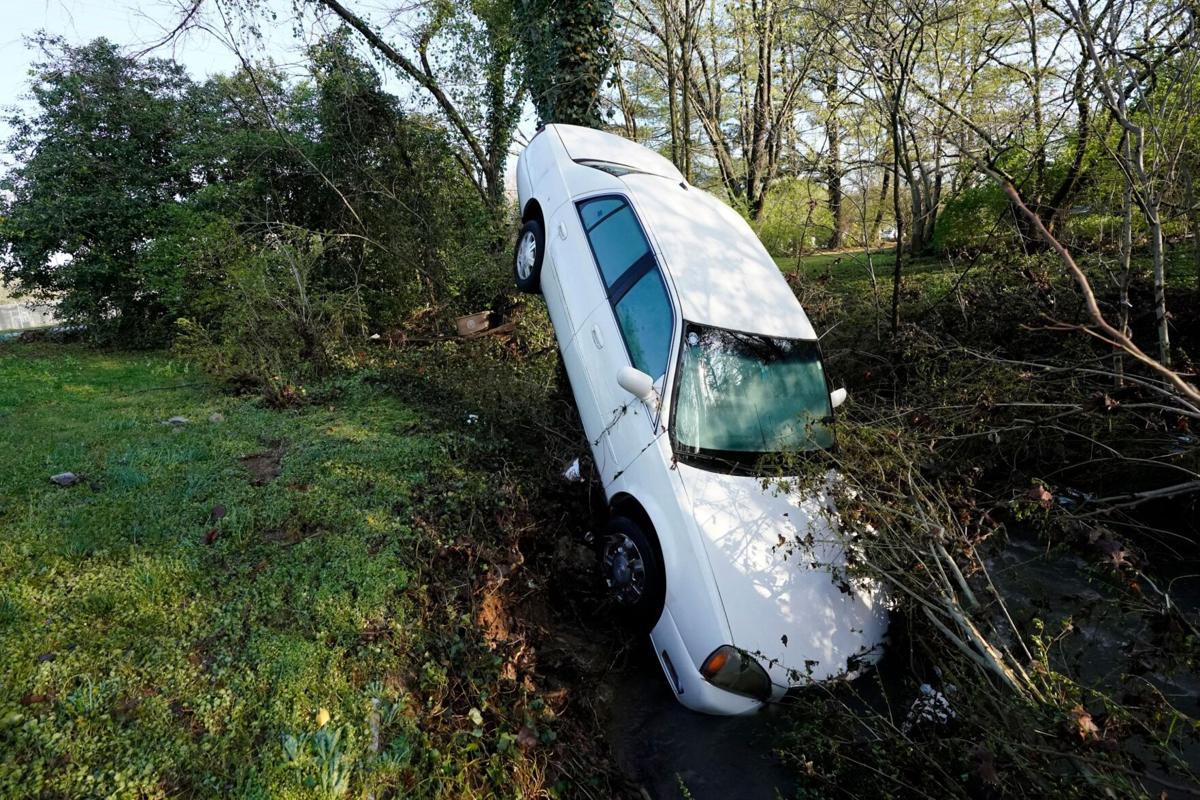 A car that was carried by floodwaters leans against a tree in a creek on March 28 in Nashville, Tenn.

(CNN) — Some of the heaviest rainfall in Nashville's history caused flooding that killed at least six people over the weekend.

Authorities identified three of the six victims as men in their 60s and 70s who drowned after driving as floodwaters ravaged the area. One of them was swept away by floodwaters when he got out of his car.

So far seven weather-related deaths have been reported across the state, the Tennessee Emergency Management Agency said Monday. Six people were killed in the Nashville area and another in the northeast of the state.

More than 100 people had to be rescued from fast-rising waters that flooded communities and damaged homes and businesses, the Nashville Fire Department said in an update Sunday night.

A resident from one apartment building in Antioch, south of Nashville, told CNN affiliate WZTV that she woke up to a mudslide compromising the building.

"You don't think that tiny little creek can get that vicious," Abbe Bolduc told the affiliate. She was one of 15 people rescued from the CityVue Apartments Sunday, WZTV reported.

Mayor John Cooper announced late Sunday on Twitter that he had declared a state of emergency to help get local and federal resources to recover from the devastation.

"Metro's first responders have worked tirelessly following the city's second-highest ever two-day rainfall, which flooded neighborhoods across the county," Cooper said in another tweet.

The flood is one of the latest tragedies to befall the city of Nashville, which in the last year has experienced a damaging tornado, a deadly derecho and a Christmas morning bombing.

More rain is on the way

Nashville International Airport recorded up 7.01 inches of rain from late Saturday afternoon to Sunday morning, making this the second-largest, two-day rainfall total on record, behind May 1-2, 2010, when 13.57 inches of rain was recorded, according to the weather service. More than 5 inches of this rain fell between 10 p.m. Saturday and 5 a.m. on Sunday.

Many rivers in the region, including the Duck, Buffalo and Harpeth rivers, have crested and are on their way back down. The Monday forecast in Nashville is clear with highs in the 60s.

But a new rain of round is expected Tuesday night through Wednesday, CNN meteorologist Haley Brink said.

Widespread rainfall totals of 1 to 3 inches are forecast, with isolated totals up to 4 inches possible. Because the ground is saturated, more rain could lead to additional flooding, Brink said.

As waters begin to recede, people in the area are working to recover, with many organizations stepping up to offer help to those displaced.

While residents from the compromised apartment building in Antioch escaped with their lives, some lost everything, evacuee Mark Piland told WZTV.

"My heart goes out to everybody," Piland said, according to WZTV. "They lost everything pretty much on the first floor of these buildings."

"I just hope everybody can stay safe, and I'm glad nobody was killed," he added.

The situation was tense for those trying to escape the flash flood, residents told WZTV.

"All I heard was screaming," Bolduc told the affiliate. "There was one lady who was completely inconsolable."

"I see a board floating down, and I'm like, 'Crap.' I woke up my husband and said, 'You have to be awake. You have to know what's happening,'" she added. "I didn't think anybody was going to believe how bad it was."

The New Tribe church at the Valley Center strip mall in Mt. Juliet took on 3 or 4 feet of water during the flooding Sunday, according to WZTV.

With just a week until Easter, pastor Jarod Smith told the affiliate that his church is now without a place to worship.

"A wall of water 3 1/2 feet tall just busted through the wall and just washed everything through the hallway, busted out the front glass, a complete loss," Smith told WZTV.

The pastor said that while he is sad about the damage, he knows that the spirit of the church is with the people.

"We're hopeful, the church is not a building," Smith told the affiliate. "The church is people, but It's devastating at the same time. As sad as it is and as much hard work we know is around the corner, we're encouraged by the ones willing to participate and help."

"We send our deepest sympathies to the loved ones of the four Nashvillians who died in last night's flooding," Cooper, the mayor, tweeted.

MNPD Urban Search and rescue officers recovered Garry Cole, 70, of South Nashville, deceased from a vehicle that was submerged in a creek Sunday morning, a tweet from MNPD said Sunday night.

Authorities also identified Douglas Hammond, 65, who died after being swept away by floodwaters when he got out of his car that was stuck.

Fredrick Richards, 64, was found dead Sunday morning near a homeless camp in wooded area and publicly identified Monday, MNPD said. Police are still working to notify the next of kin of a 46-year-old woman found dead in the same area.