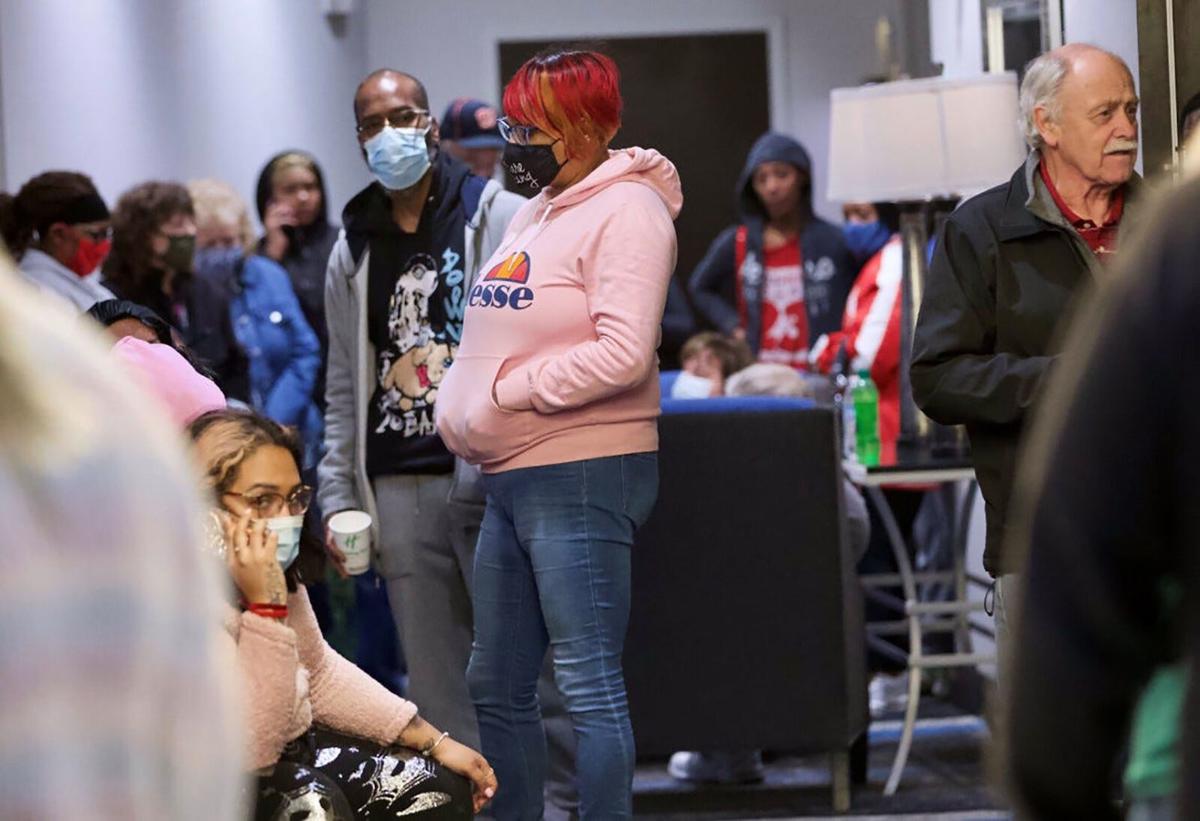 Family members await information about their loved ones outside the FedEx facility. 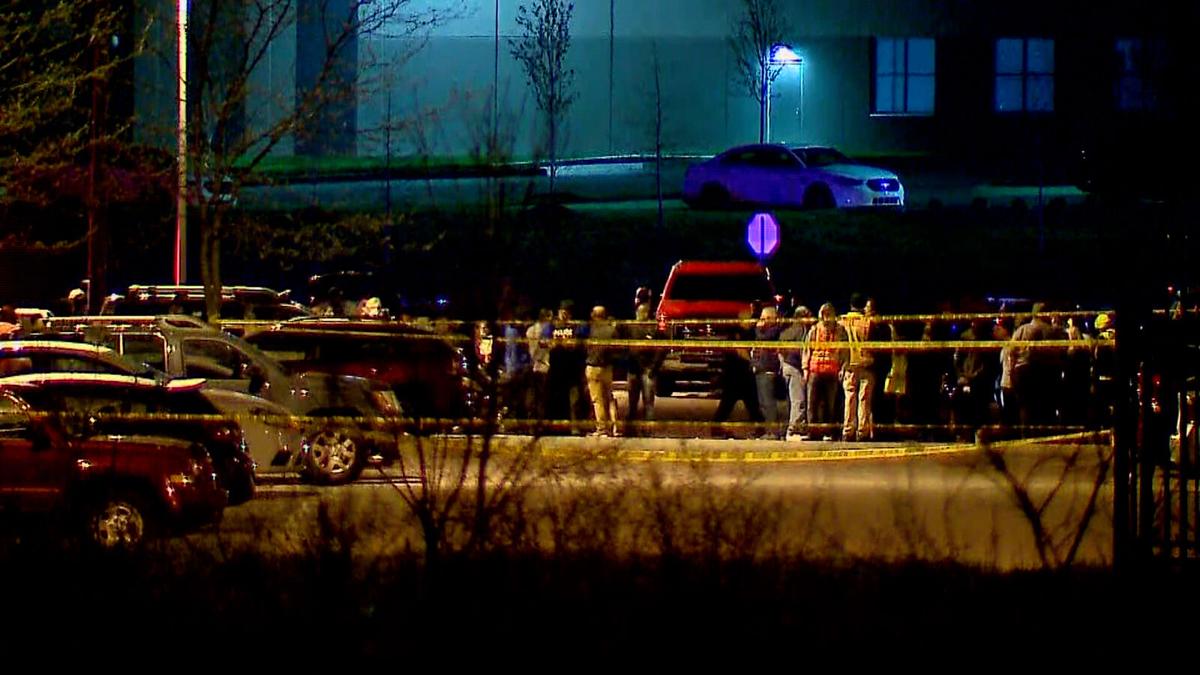 Authorities continue to investigate the scene of mass shooting Friday, at a FedEx Ground facility in Indianapolis.

The gunman took his own life and police didn't fire, McCartt said.

The suspect was known to federal and local authorities, and a relative reached out to authorities warning about that person's potential for violence, according to three law enforcement sources briefed on the matter.

Investigators are trying to determine the motive and were searching what they believe is the gunman's home, FBI special agent in charge Paul Keenan told reporters late Friday morning.

"Nothing we learn can heal the wounds of those who escaped with their lives, but who will now ... endure the memories of this horrific crime," Indianapolis Mayor Joe Hogsett said at the same news conference.

The mass shooting is the country's deadliest since 10 people were killed March 22 at a grocery store in Boulder, Colorado.

Thursday night's killings began when a gunman "got out of his car, and pretty quickly started some random shooting outside the facility," McCartt said.

The gunman then "went inside and did not get very far into the facility at all," while shooting others there, McCartt told CNN earlier Friday.

Two employees inside the building at the time heard as many as 10 gunshots, they told CNN affiliate WISH. The men left the building and watched as about 30 police cars responded, they said.

"Thank God for being here because I thought I was going to get shot," one of them, Jeremiah Miller, told WISH.

Investigators have heard the shooting lasted "just a couple minutes — that it did not last very long," McCartt said.

"My understanding is, by the time that officers entered ... the situation was over — that the suspect took his life very shortly before officers entered the facility," McCartt told reporters.

Four people were found dead outside and four others, not counting the shooter, were dead inside, McCartt said.

The incident marks at least the 45th mass shooting in the United States since the Atlanta-area spa shootings on March 16. CNN considers an incident to be a mass shooting if four or more people, excluding the gunman, are wounded or killed by gunfire.

In a news release, police said five people were taken to a hospital with gunshot wounds and two other people were treated at the scene and released.

The gunman had at least one weapon, which investigators believe was a rifle, McCartt told reporters.

Police early Friday were trying to make sense of the crime scene while relatives of FedEx employees gathered at a nearby hotel, which officials offered as a place where they could await news, reunite with the workers and meet with police chaplains.

"Many of the employees did not have cell phones on them in the facility," and so many survivors were not immediately able to contact their families, McCartt told CNN.

It's not clear when the suspect's family member warned authorities, but the outreach was followed up by local authorities and the FBI, according to the three law enforcement sources briefed on the matter.

The FBI opened a preliminary investigation into any possible threat, but it eventually closed the inquiry after concluding there wasn't sufficient evidence to continue it, according to the sources.

A spokeswoman for the Indianapolis Metropolitan Police Department declined to comment about CNN's reporting.

When asked Friday morning whether witnesses indicated that FedEx or security personnel had any indication that something like Friday's shooting would happen, McCartt said no.

"We're still working with FedEx security for anything that might have been an indication this was going to happen right now," McCartt said at the Friday morning news conference.

FedEx worker Timothy Boillat and his coworker heard what they thought initially were "two loud metal clangs" when the shooting started, he told CNN affiliate WRTV.

"They didn't sound like gunshots at first ... Then, we heard three more shots, and then my buddy ... saw someone running out of the building." Boillat said.

"And then more shots went off. Somebody went behind their car to the trunk and got another gun," Boillat said, without saying whether that person was the shooter.

"And then I saw one body on the floor," Boillat told WRTV.

Police are asking anyone who was at the scene and may have left for safety or for medical treatment to contact them to provide information on the shooting.

Governor and other officials offer condolences

Hogsett, the mayor, said the process of healing will be impacted in part by what conversations the nation has about cycles of violence "driven by readily accessible guns."

"We must guard against resignation or even despair — the assumption that this is simply how it must be and that we might as well get used to it. We need the courage that compels courageous acts that push past weariness," Hogsett said.

FedEx released a statement saying it was "deeply shocked and saddened by the loss of our team members."

"Our most heartfelt sympathies are with all those affected by this senseless act of violence. The safety of our team members is our top priority, and we are fully cooperating with investigating authorities," FedEx said.

Indiana Gov. Eric Holcomb said Friday is "another heartbreaking day and I'm shaken by the mass shooting at the FedEx Ground facility in Indianapolis."

"In times like this, words like justice and sorrow fall short in response for those senselessly taken. Our thoughts are with the families, friends, coworkers and all those affected by this terrible situation," Holcomb said.

Flags will be lowered to half-staff from Friday until sunset Tuesday "in remembrance of those we've lost," Holcomb said.

President Joe Biden ordered flags at federal facilities to be lowered to half-staff and urged Congress to act on firearm legislation, calling gun violence an "epidemic."

US Rep. Andre Carson, whose district includes Indianapolis, tweeted that he was heartbroken by the mass shooting.

"I am communicating with local authorities to get all details of the attack and my office stands ready to help everyone affected any way we can," he said.