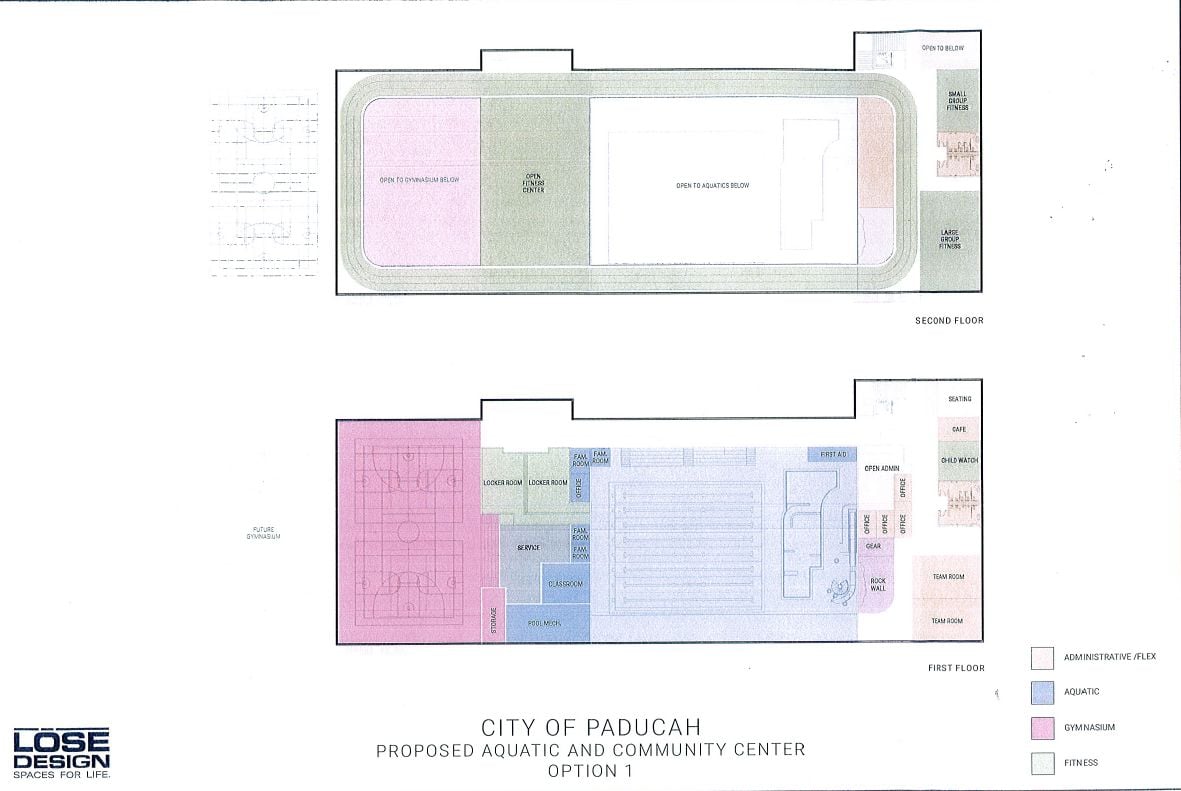 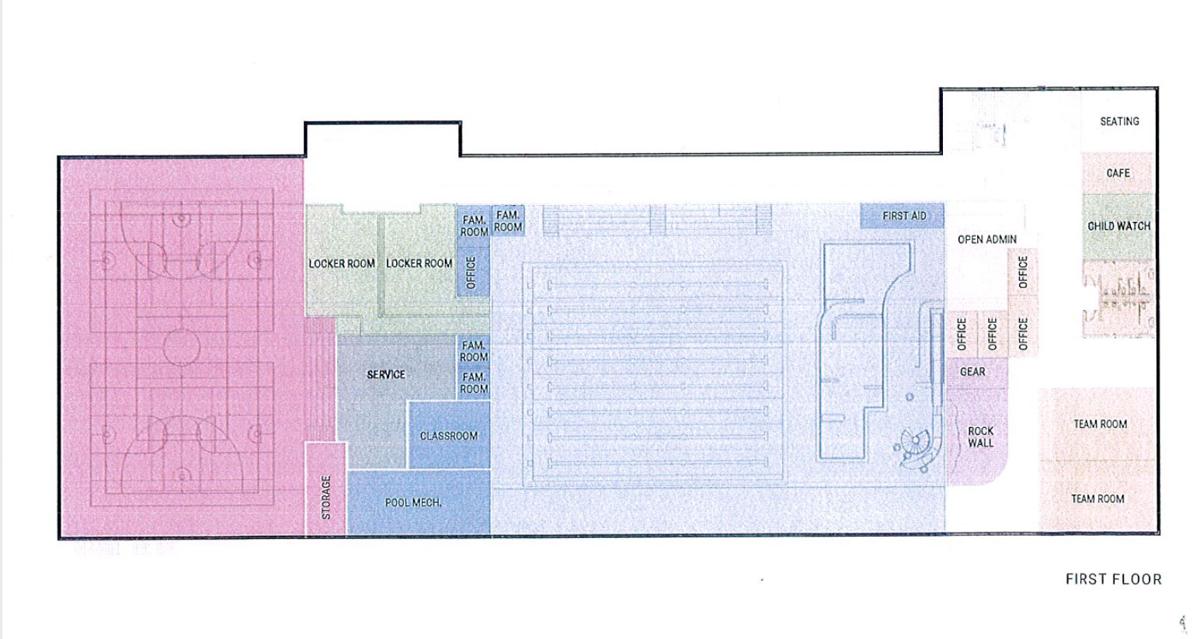 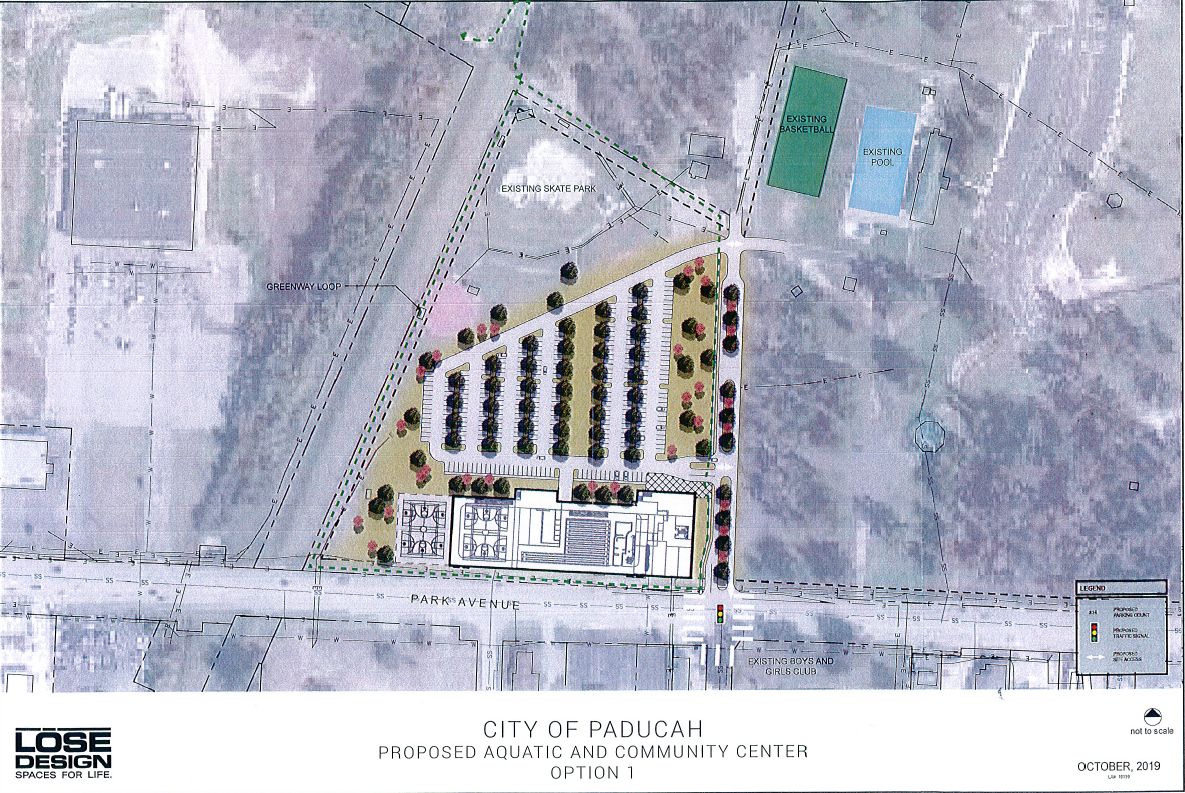 PADUCAH -- Paducah leaders have shared with Local 6 the preliminary site and floor plans of an indoor aquatic and recreation center that will be built at Bob Noble Park.

The plans, create by the Nashville-based firm Lose Design, show that the two-story, 60,000-square-foot facility will be built at the location of the ball diamonds at the park. The facility will be right along Park Avenue.

"You'll be able to drive right by it, see it all beautiful in the day and lit up at night," said Paducah City Manager Jim Arndt.

The preliminary site plan shows an expansive parking lot, with trees lined between rows of parking spaces. There is also room for the building to expand in the future. Arndt said they are considering adding an all-weather sports field outside as well.

Meanwhile, the preliminary floor plan shows the following features on the first floor:

-- A gym with courts for basketball and volleyball.

-- A pool with eight swimming lanes.

-- A water slide with a flume.

-- An area for childcare

Arndt said they hope to install a warm-water therapy pool as well. Years down the line, he said they may add more amenities, like a Ninja Warrior course suspended above the aquatics area.

The second floor features a walking and jogging track that circles almost the entire length of the building. The floor has an open design, so those using the track can look down and see people using the pool and the ball courts on the first floor. The second floor also has an open fitness center as well as rooms for large and small group activities.

"It's really going to be a shot in the arm for economic development purposes and also for quality of life purposes," said Arndt.

Arndt said the building will feature a lot of glass, both for visibility and to take advantage of daylight. The facility and the various areas within will be accessible for those with disabilities, per the standards of the ADA (Americans with Disabilities Act), Arndt said.

"It's going to be a wellness center. So it's there for wellness. We're trying to serve our population from 0 to -- you pick the age -- we'll say 108," Arndt said. "So we're trying to make sure that it's accessible and it's available. So basically, the hours are going to be long. We'll be open early in the morning til late at night, seven days a week operation."

Although the hours of operation are still being determined, Arndt said they had talked about 5:30 a.m. to 11:30 p.m. every day of the week.

Arndt envisions construction to begin around this time next year. He hopes the facility will be completed by around Christmas in 2021, although the build could take longer, possibly up to 14 or 16 months.

Once the facility opens, there will be membership fees that have yet to be determined, Arndt said. But the rates will be competitive.

"It's really following the YMCA model, where you basically are pricing it where it's affordable for the members of your community to utilize," said Arndt. "Also, we'll be looking into scholarship programs. Some people may not have the ability to pay the membership fee. But we are going to want to make sure everybody has access to that. So we'll be working with out local non-profits and philanthropic organizations to see if we can get them to develop an escrow, if you will, for scholarship funds."

Arndt said the "ultimate goal is access for everyone from the community."

Arndt said they are still working out the number of staff members who will work at the facility.

As for whether the facility can sustain itself financially, a firm conducted a five-year performance analysis of the facility, Arndt said.

"(Within five years of operation), we'll be in the positive end of the spectrum, if you will," said Arndt. "Basically, we're looking at hopefully getting there in five years. But other projections show that we could be close to two to three years after opening."

Arndt added that "self-sustaining" means the facility will be able to cover the cost of its day-to-day operations, maintenance and personnel. But future capital replacement projects -- like replacing the roof 15 to 20 years from now -- will be funded with the help of Friends of the Park. Arndt said the organization is working to raise money.

Arndt emphasized the planning of the indoor aquatic and rec center is still in the early stages and things are subject to change.

Tuesday night during the Paducah City Commission meeting, leaders introduced two ordinances related to the project. One would allow the city to issue $22 million in bonds to cover the costs of construction. The city hopes to begin selling the bonds to investors in January.

The other ordinance would raise the city's insurance premium tax from 6% to 7% to help cover the interest and principal payments associated with the issuance of the bonds.

"Basically, the $700,000 that we're hoping to generate (annually) off that 1% additional insurance premium tax will go towards the annual debt service for this facility, which will be a 20-year bond term," Arndt said.

The tax increase would not be collected until July 1, 2020.

The Board of Commissioners will vote on both ordinances on Nov. 26.

In addition, about $1.4 million in debt service payments each year will come from other debt issues that the city currently has, Arndt explained.

"What we're going to be doing is utilizing our current debt structure to support this, as well as the insurance premium tax," said Arndt. "So when we have issues that come up off the books, instead of freeing up those dollars to do a different project, they'll go to pay for this project."

Ultimately, Arndt said he hopes the indoor aquatic and rec center will let people know that "we have a welcoming, progressive facility that we want you to use." 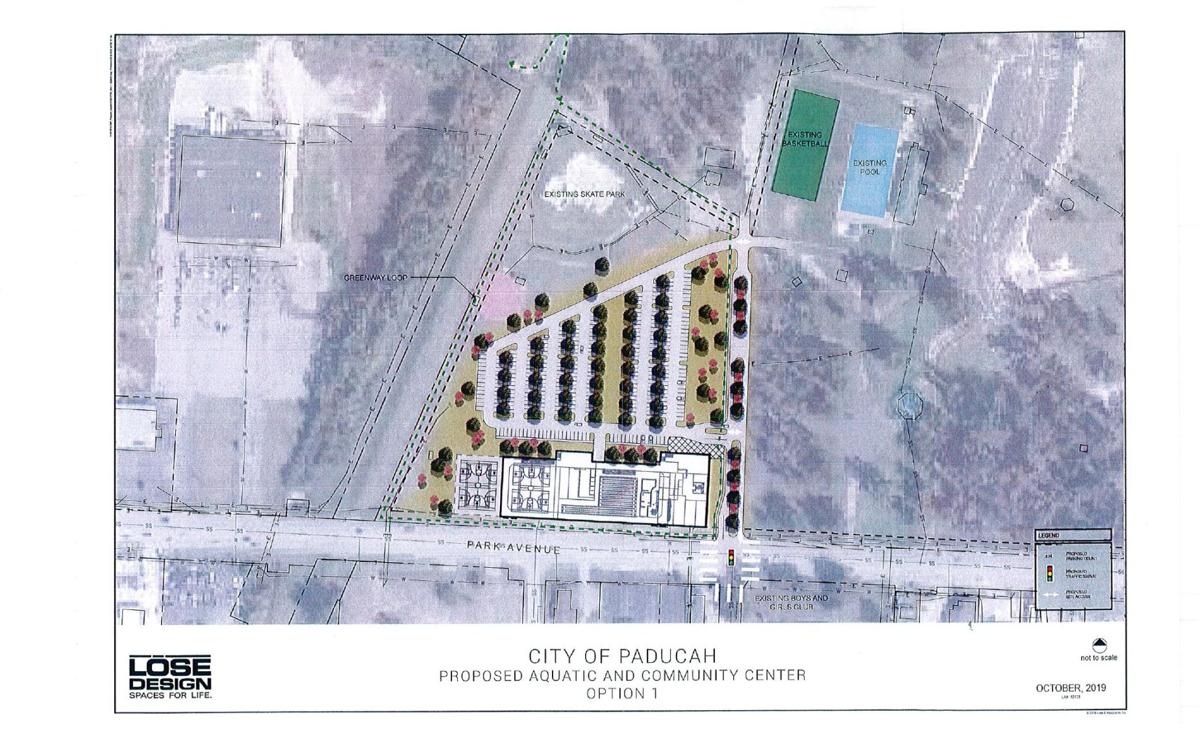 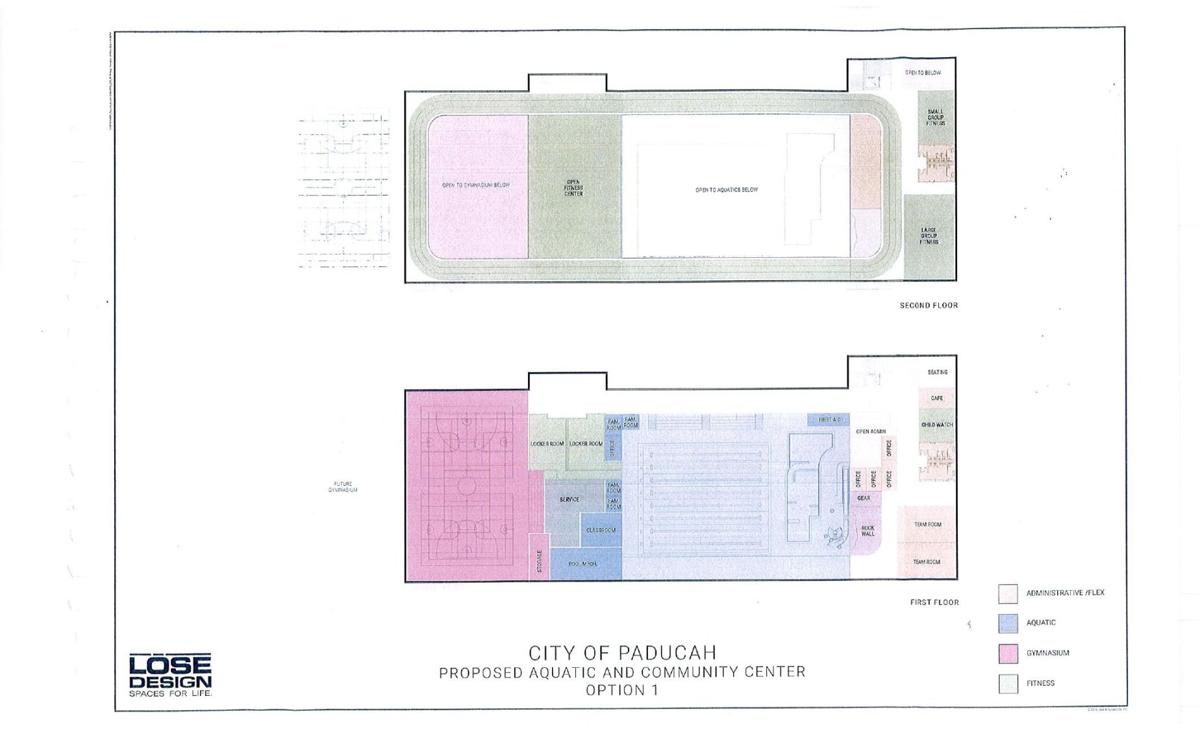 Paducah leaders have approved a contract with a firm to design an indoor aquatic center that will feature pools and other recreational opportunities.