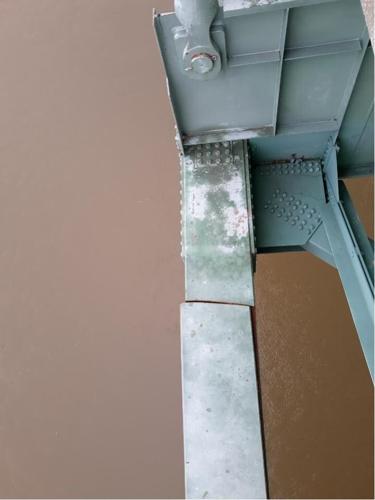 This photo from the Tennessee Department of Transportation shows the crack in the  I-40 Hernando DeSoto Bridge connecting Tennessee and Arkansas. 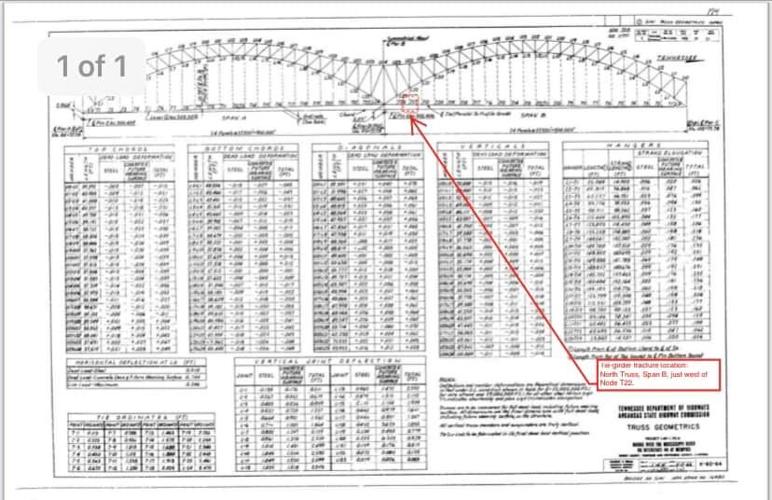 TDOT says inspection of the bridge could take a couple of weeks to complete. 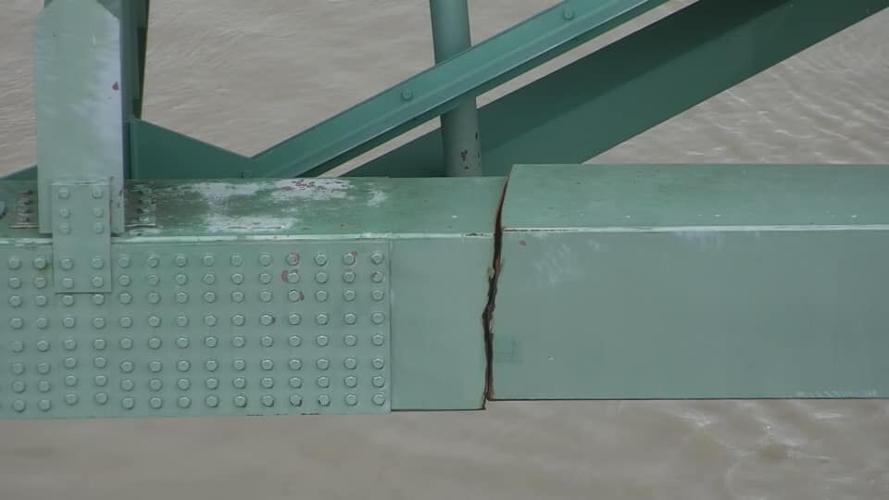 This photo from TDOT shows the crack in the  I-40 Hernando DeSoto Bridge connecting Tennessee and Arkansas.

(CNN) — It could take up to two months to temporarily repair a crack that forced the closure of a vital highway bridge in Memphis, Tennessee, the state's chief engineer told CNN, while dozens of ships with hundreds of barges wait to safely travel the busy waterway below.

The Hernando de Soto Bridge on Interstate 40 -- a major artery for traffic crossing the Mississippi River between Memphis and eastern Arkansas -- was shut down Tuesday for emergency repairs after transportation officials discovered the crack during a routine inspection.

The US Coast Guard put a waterway restriction in place on the river below, and there were at least 44 vessels, with more than 700 barges, waiting to travel the river in either direction Thursday morning, according to Lt. Mark Pipkin of Coast Guard Sector Lower Mississippi River.

"It will be a number of weeks at least until we can have a repair in place, probably six to eight weeks minimum," Paul Degges, Tennessee Department of Transportation chief engineer, told CNN. "Hopefully, we can pull a rabbit out of a hat sooner, but public safety is most important. There are lots of moving parts to look at."

I-40 is a major transcontinental transportation route, Degges said, and CNN affiliate WMC called the bridge a "vital piece of America's infrastructure for moving traffic and freight around the country."

According to the TDOT, the average daily traffic for the bridge is about 45,000 vehicles, with about 25% of that being truck traffic.

Drivers are being rerouted to Interstate 55, about 3 miles south, where another bridge spans the Mississippi River. On Thursday afternoon, state traffic cameras showed heavy traffic headed eastbound into Memphis from Arkansas, and much of the traffic appeared to be tractor trailers.

From the vantage point of a CNN crew on the ground, a wall of traffic could be seen along I-55, barely moving at a snail's pace.

It's unclear when the crack appeared

Officials are hopeful they'll develop a strategy in the next few days to create a timeline for the repair, Degges said. There will likely be an interim temporary repair to get vehicle traffic back while engineers and contractors work to implement a long-term solution, he said.

Officials hope to have an answer on when it will be safe to open the river to barge traffic "in the next day or so."

"We are looking at (two or three) different scenarios of what different types of repairs could be done to get traffic back up and then from there to move on to a permanent repair," Degges said.

Tennessee shares responsibility for the bridge with the Arkansas Department of Transportation, which discovered the crack during a routine inspection and immediately shut down the bridge, the release said.

Tennessee Gov. Bill Lee said the discovery of the crack and the subsequent closure showed the "process worked."

Degges described the crack as "very unusual." He believes the crack was most likely caused by fatigue or a welding error when the bridge, designed in the 1960s, was originally constructed, but the state will conduct forensic analysis to discern the exact cause.

The bridge was opened in August 1973 with a price tag at that time of $57 million, WMC reported.

It's unclear how long the crack has been there, but Degges believes it has probably been there for a couple weeks. He noted it was not present during a bridge inspection in September 2019.

The Tennessee Department of Transportation has hired an engineering firm and a full mathematical analysis is under way to look at data and models and discuss potential repair solutions.

Lee said the Army Corps of Engineers and the Coast Guard are involved. The state will be partially responsible for the bridge repair, he said, adding, "there is still a lot of information that we need to learn."

The bridge's closure comes as President Joe Biden is calling for a $115 billion increase in spending to modernize bridges, highways, roads and main streets in need of repair.

The infrastructure plan, which must be approved by Congress, aims to fix the 10 most economically significant bridges in the country, as well as proposing repairs to 10,000 smaller bridges.

It's possible the Hernando de Soto Bridge would be eligible for funding, but the White House's plan lacks details on how the money would be disbursed. The administration has not identified which 10 bridges it deems most economically significant.

The President's plan would create a new competitive grant program to fund large bridges that move high volumes of people and freight and are in need of reconstruction or replacement, based on their condition or inability to manage current traffic volumes, according to an administration official.

Once the American Jobs Plan is passed into law, the US Department of Transportation would launch a call for states to submit applications explaining why their bridge is among the most significant because of its size, condition, traffic volume, and importance to the regional or national economy, the official said.

"A bridge like this could likely qualify, but it's hard to say what the metrics will be," said Paul Lewis, vice president of policy and finance at the Eno Center for Transportation, a think tank based in Washington, DC.

At 48 years old, the Hernando de Soto Bridge is newer than the 72-year-old Memphis-Arkansas Bridge on I-55, where traffic is being diverted.

"This kind of fracture is rare," Lewis said, "but it goes to show how we have a lot of bridges that are old and it's going to take a lot of funding and resources to bring them up to a state of good repair."

In an interview with CNN's Jim Sciutto on Thursday, US Transportation Secretary Pete Buttigieg pointed to the bridge closure -- and the recent ransomware attack that forced the six-day shutdown of the Colonial Pipeline -- as reasons why the plan is so important.

"We've got a major bridge out of commission. We've been reminded in a very blunt way with the pipeline issues just how important infrastructure is," he said. "What we definitely can't afford is to do nothing."