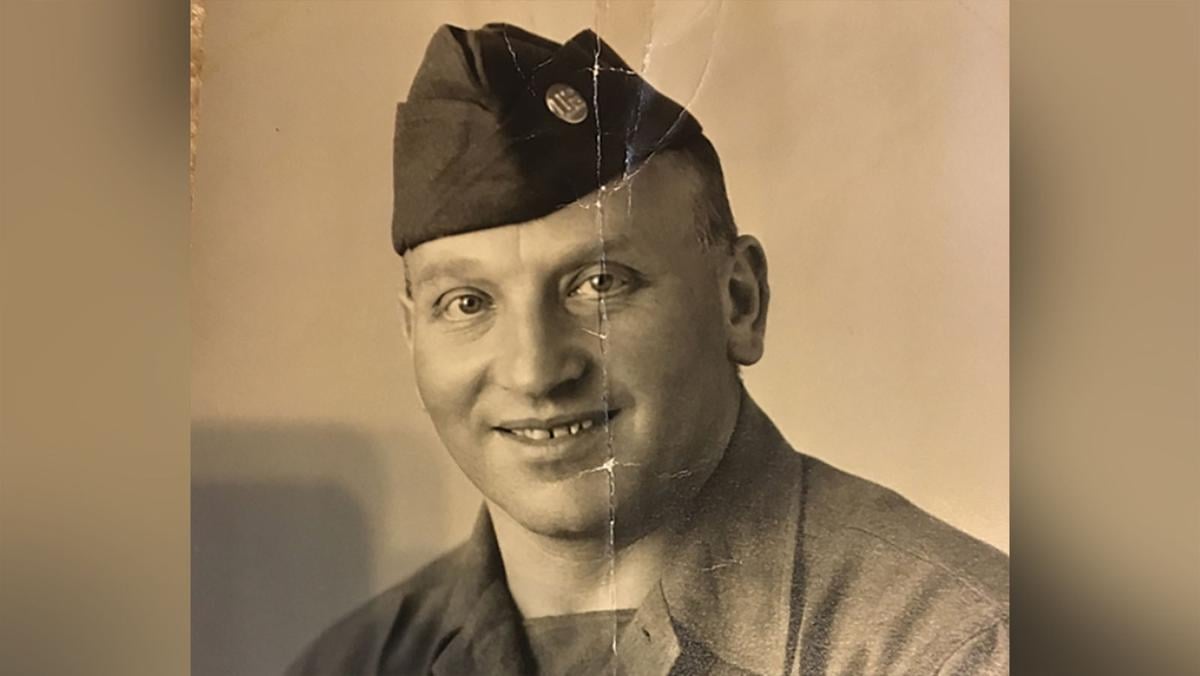 On October 13, 1942 -- less than a year after America joined the war -- Richard Stern enlisted in the US army. 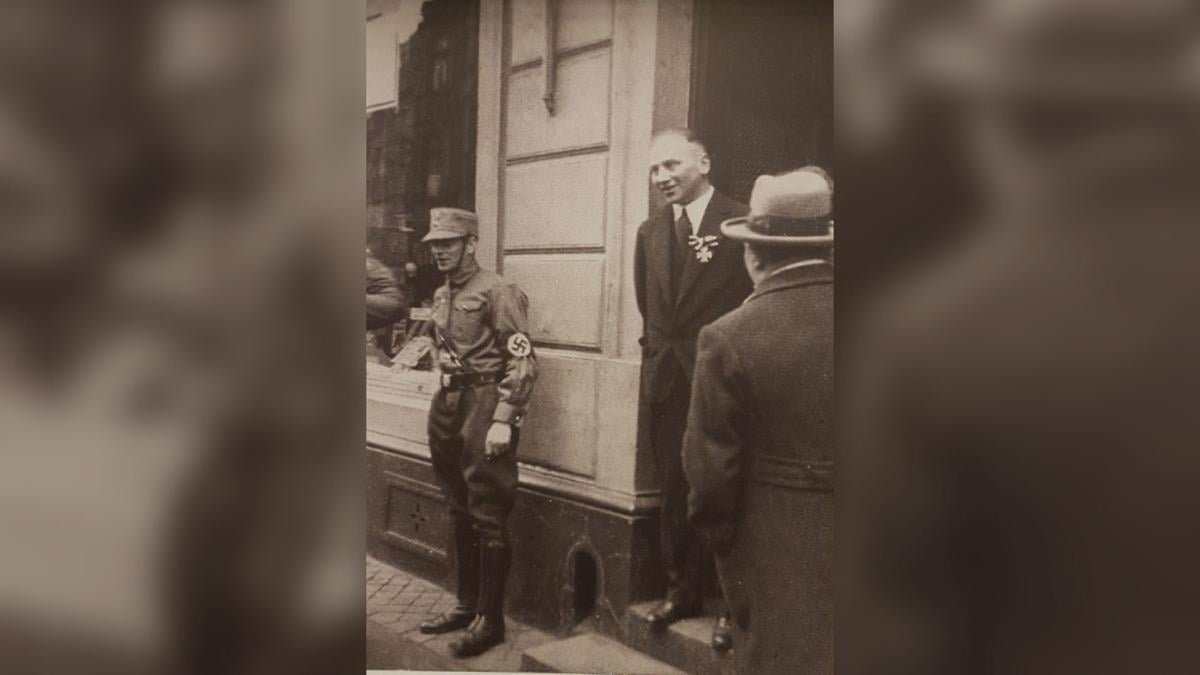 (CNN) -- A Jewish shopkeeper standing proudly outside his store, a wry smile on his face and an Iron Cross pinned to his lapel.

Just a meter away is a Nazi guard.

It is an notorious image of the Nazi era, replicated in museums and institutions across Germany.

Until now little was known about the man photographed outside his Cologne bedding store on April 1, 1933 -- the day the Nazis launched a boycott of Jewish businesses.

The boycott saw guards stand outside Jewish shops in a bid to deter customers from entering. Many stores were subsequently vandalized.

As many countries around the world commemorate Holocaust Memorial Day on Monday, the incredible story of one Jewish shopkeeper, whose defiant picture has been shown around the globe, has been uncovered by researchers at genealogy site MyHeritage.

His name was Richard Stern.

"If you look closely it seems the Nazi party agent feels uncomfortable," Eike Stegen, a historian at the House of the Wannsee Conference, told CNN.

"You realize that he is wearing a fantasy uniform -- he has never been to war, while the soldier in the picture is the Jewish German who is proudly showing his Iron Cross.

"The power is with the soldier from the First World War."

The Iron Cross, once a military decoration, was considered a top honor in Germany during both world wars.

Stern's fight against his oppressors went even further than this image. He would later receive another award for his outstanding military contribution -- this time from the US army in World War II.

The photo of defiance

Researchers at MyHeritage uncovered a wealth of information about the German Jew who earned the prestigious Iron Cross for his distinguished service during World War I.

They sifted through hundreds of online documents to uncover his incredible story.

Researcher Nitay Elboym told CNN that he and his team became interested in the 1933 photo after seeing the image online and learning that it hangs in the House of the Wannsee Conference, at which the Nazis devised the Final Solution, which the Nazis used to describe their genocide of Jews in Europe.

"It's his body language that got our attention," Elboym said. "Not only is he standing there with the Iron Cross on, but the look on his face says 'I was a German hero in World War One, I'm wearing the medal that you gave me, so how dare you do this?'"

Jack Romberg, a Florida-based rabbi, is the grandson of Stern's sister Martha.

The eldest of three brothers, Romberg recalls his quiet relative with affection. Now retired, the 65-year-old is writing a book about his great uncle, whom he says was more like his grandfather.

Romberg was able to shed light on the 1933 photo, which is also on display at Berlin's Jewish Museum as well as the city's German Historical Museum, the NS Documentation Center in Cologne and the nearby Roonstrasse Synagogue.

At Wannsee and the Jewish Museum in Berlin, the picture is displayed alongside a pamphlet written by Stern.

According to Romberg, Stern's brother-in-law Heinz Flögerhöver produced the leaflets in his print shop next door, distributed them to passers-by and took the photo. The shop was forced to close following Kristallnacht in 1938. This rampage of state-sponsored violence by the Nazi regime against Jewish communities caused widespread looting and destruction of Jewish properties across Germany and Austria.

Addressed to "all front comrades and Germans," the document states that Hitler and the Nazis repeatedly declared: "Anyone insulting a combat veteran is punishable by imprisonment!"

Stern said in the pamphlet that he had enlisted as a teenager and served during World War I.

His brother and father also served. Taking a stand against the boycott, he wrote: "Has the German Jew become a second class human, only tolerated as a guest in his fatherland?

"We see this action against German Judaism as an insult to the memory of 12,000 German combat soldiers of the Jewish faith killed in action."

In 2012, Romberg visited the Jewish Museum in Berlin and was taken aback by what he saw.

"Their version of the photo is huge and the picture of the leaflet is very close. I stood there and I couldn't stop staring at it even though the same picture hangs in my office. I couldn't say anything -- it was unbelievable."

On his most recent visit to Germany in September, Romberg met with archivists at the various museums and institutions.

"They were shocked that they'd met a living relative of Richard Stern -- it blew them away," he said.

Stegen told CNN that Stern's image features in the House of the Wannsee Conference's permanent exhibition, "The Meeting at Wannsee and the Murder of the European Jews."

"That is why we portray Richard Stern. He does not 'simply' suffer from persecution, he is not merely a victim of discrimination, hatred, racism, but he acts," Stegen said.

Two World War medals, given either side of the Atlantic

Records unearthed by MyHeritage show that Stern left Germany and arrived at Ellis Island, New York, aged 40 in May 1939 -- just four months before war broke out. It stated that the first person he met up with in the US was his brother-in-law Ludwig Walker.

The research carried out by MyHeritage did not uncover a wife or children. Romberg explained that the reason was because in 1927 Stern had promised his dying father that he would look after his sister Martha, whose marriage had broken down, and her son Rudolf.

Stern became the boy's legal guardian and worked to guarantee their safe passage to America, together with his own. But problems with Martha's paperwork delayed their escape until the very end of August -- just days before war broke out.

A census the following year revealed that Stern was working as a bus boy and lived in Queens with two of his sisters, Walker, a niece and a nephew.

He was aged 43 and still not a citizen.

Scott Daubert, director of the National Infantry Museum in Columbus, Georgia, told CNN that a German national being recruited by the US at the time would have been quite rare but that soldiers were sometimes recruited for their language skills.

"Being a non-citizen and German would have certainly raised an eyebrow or two, but there would have been many questions early on in the training stage to gauge loyalty," Daubert said.

In 1944 Stern was awarded the Silver Star, which is the third-highest military combat decoration that can be awarded to a member of the US armed forces.

The Long Island Star-Journal reported: "The victim of German brutality, 45-year-old Sergeant Richard F. Stern, earned the Silver Star for gallantry in action during an assault Jan. 7 on the slopes of Mount Porchio when in the face of heavy enemy fire he addressed the Germans in their own tongue and demanded that they surrender, convincing them they were hopelessly outnumbered."

Today, the medal holds pride of place in Romberg's home, alongside a treasure trove of documents and letters from Stern.

"When I was about seven my dad told me the story of Uncle Richard and what he did in World War II, so that summer I went running in to the house and said 'Uncle Richard can I see the Silver Star?' It was in a box at the bottom of a drawer in a back bedroom," Romberg told CNN.

The Iron Cross, however, is missing.

Romberg told CNN: "In 1942 the USA were collecting metal to melt down and make into ammunition.

"So Uncle Richard turned it in to create bullets to shoot the Nazis. He made it very clear in January 1942 that he had to enter the US army. He was 43 but determined to do it."

Monday, January 27, 2020 marks the 75th anniversary of the liberation of the Auschwitz concentration camp.