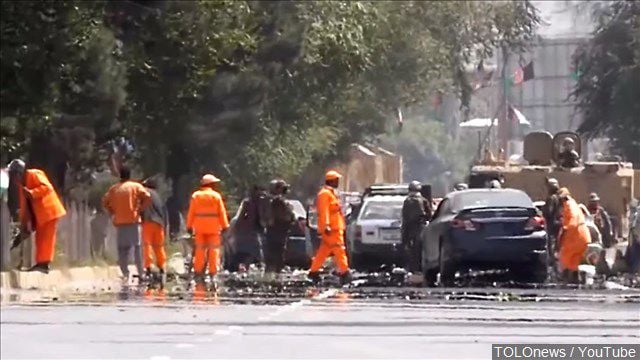 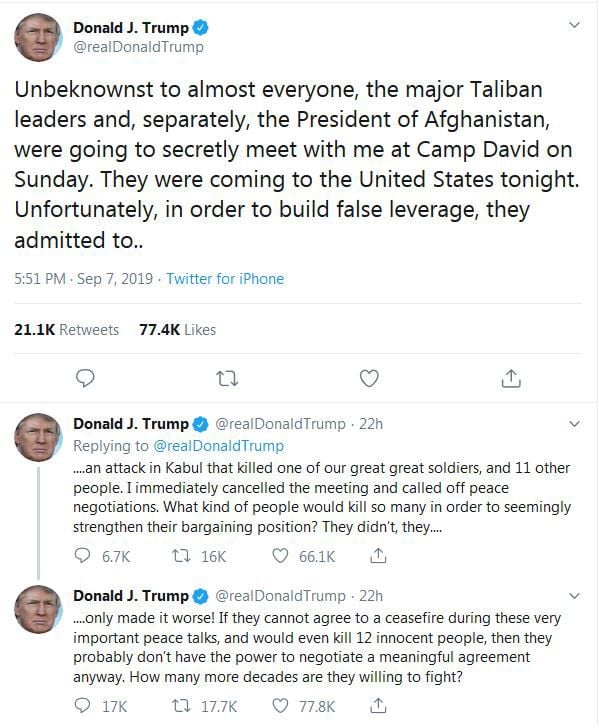 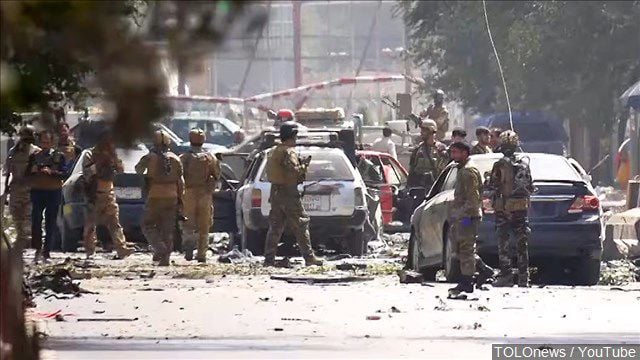 WASHINGTON (AP) — President Donald Trump's weekend tweet canceling secret meetings at Camp David with the Taliban and Afghan leaders just days before the anniversary of the Sept. 11 attacks is the latest example of a commander in chief willing to take a big risk in pursuit of a foreign policy victory only to see it dashed.

What had seemed like an imminent deal to end the war has unraveled, with Trump and the Taliban blaming each other for the collapse of nearly a year of U.S.-Taliban negotiations in Doha, Qatar.

The insurgents are promising more bloodshed. The Afghan government remains mostly on the sidelines of the U.S. effort to end America's longest war. And as Trump's reelection campaign heats up, his quest to withdraw the remaining 14,000 U.S. troops from Afghanistan remains unfulfilled.

Trump said he axed the Camp David meetings and called off negotiations because of a recent Taliban bombing near the U.S. Embassy in Kabul that killed a U.S. service member, even though nine other Americans have died since June 25 in Taliban-orchestrated violence.

Trump's secret plan for high-level meetings at the presidential retreat in Maryland resembled other bold, unorthodox foreign policy initiatives — with North Korea, China and Iran — that the president has pursued that have yet to bear fruit.

"When the Taliban tried to gain negotiating advantage by conducting terror attacks inside of the country, President Trump made the right decision to say that's not going to work," said Secretary of State Mike Pompeo, who appeared Sunday on five TV news shows.

"If the Taliban don't behave, if they don't deliver on the commitments that they've made to us now for weeks and in some cases months, the president of the United States is not going to reduce the pressure," Pompeo said.

Trump's three high-profile meetings with North Korea's Kim Jong Un — including the president's recent brief footsteps onto North Korean soil — prompted deep unease from many quarters, including his conservative base in Congress.

And while the meetings produced the ready-for-television visuals that Trump is known to relish, negotiations between Washington and Pyongyang have been stalled for months with no tangible progress in getting the North to abandon its nuclear weapons.

Trump's offers to hold talks with the Iranian leadership have similarly met with no result and Iran has moved ahead with actions that violate the 2015 nuclear deal that the president withdrew from last year.

With China, Trump has vigorously pursued a trade war, imposing billions of dollars in tariffs on Chinese imports that have yet to force a retreat by Beijing. So far, the discussions have unsettled financial markets and have resulted in retaliatory steps by both Beijing and Washington.

Pompeo defended Trump's foreign policy, depicting it as tough diplomacy, rather than naivete or inexperience.

"He walked away in Hanoi from the North Koreans where they wouldn't do a deal that made sense for America," Pompeo said. "He'll do that with the Iranians. When the Chinese moved away from the trade agreement that they had promised us they would make, he broke up those conversations, too."

Democrats said Trump's decision to nix a deal with the Taliban was evidence that he was moving too quickly to get one.

New Jersey Sen. Bob Menendez, the ranking Democrat on the Foreign Relations Committee, said the talks were ill-conceived from the start because they haven't yet involved the Afghan government.

The Taliban have refused to negotiate with the government its sees as illegitimate and a puppet of the West so the Trump administration tried another approach, negotiating with the Taliban first to get a deal that would lead to Taliban talks with Afghans inside and outside the government.

"It's another example of the Trump administration's foreign policy, which is a high-wire act that ultimately is focused on Trump as a persona but not in the strategic, methodical effort of creating peace," Menendez said.

Criticism of the Camp David plan was not limited to Democrats or "Never Trump" Republicans.

"Camp David is where America's leaders met to plan our response after al Qaeda, supported by the Taliban, killed 3000 Americans on 9/11," tweeted Rep. Liz Cheney, R-Wyo. "No member of the Taliban should set foot there. Ever."

Camp David is where America’s leaders met to plan our response after al Qaeda, supported by the Taliban, killed 3000 Americans on 9/11. No member of the Taliban should set foot there. Ever. The Taliban still harbors al Qaeda.The President is right to end the talks.

A U.S. official familiar with the Taliban negotiations said the "very closely held" idea of a Camp David meeting was first discussed a week and a half ago when Trump huddled with his national security team and other top advisers to talk about Afghanistan. The official spoke on condition of anonymity to discuss private deliberations.

Some administration officials, including national security adviser John Bolton, did not back the agreement with the Taliban as it was written, the official said. Bolton does not think the Taliban can be trusted. Bolton advised the president to draw down the U.S. force to 8,600 — enough to counter terror threats — and "let it be" until a better deal could be hammered out, the official said.

Pompeo said he didn't know if Trump will follow through on his pledge to reduce the number of U.S. troops there from 14,000 to 8,600.

U.S. envoy Zalmay Khalilzad had recently announced that he had reached an agreement in principle with the Taliban. The U.S. would withdraw about 5,000 U.S. troops within 135 days of signing the deal. In exchange, the insurgents agreed to reduce violence and prevent Afghanistan from being used as a launch pad for global terror attacks, including from local Islamic State affiliate and al-Qaida.

Pompeo said the Taliban agreed to break with al-Qaida — something that past administrations have failed to get the Taliban to do. The insurgent group had hosted al-Qaida leader Osama bin Laden as he masterminded the 9/11 attacks. After the attacks, the U.S. ousted the Taliban, who had ruled Afghanistan with a harsh version of Islamic law from 1996 to 2000.

But problems quickly emerged. Even as Khalilzad explained the deal to the Afghan people during a nationally televised interview, the Taliban detonated a car bomb targeting a compound in Kabul where many foreign contactors lived.

Far from guaranteeing a cease-fire, the deal included only a reduction in violence in Kabul and neighboring Parwan province, where the U.S. has a military base.

Then on Thursday, a second Taliban car bomb exploded in Kabul and killed 12 people including a U.S. service member. Khalilzad abruptly returned to Qatar for at least two days of negotiations with the Taliban, but has since been recalled to Washington.

The Afghan government says it doesn't believe talks between the United States and Taliban will continue "at this stage." It is bracing for Sept. 28 presidential elections, which the Taliban have threatened to disrupt with violence.

Trump's suspension of the negotiations "will harm America more than anyone else," the Taliban said in a statement. "It will damage its reputation, unmask its anti-peace policy to the world even more, increase its loss of life and treasure and present its political interactions as erratic."