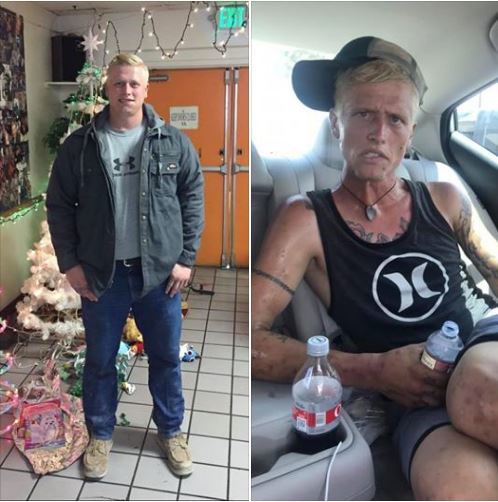 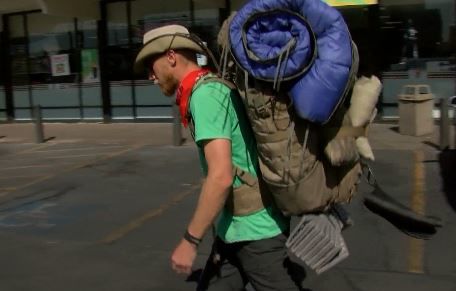 A Marshall County, Kentucky, man has been trying to help put a mother's mind at ease by finding her 27-year-old son in Las Vegas. Monday night, he says he found him.

Jennifer Tracy took to Facebook to help find her son, 27-year-old Cody, after she hadn't heard from him in weeks. She said Cody is homeless and has been battling addiction.

Marshall County native Taylor Powell is in Las Vegas. When he saw Tracy's post about her son, he took it upon himself to look for him.

The video includes the caption "WE GOT HIM!!!!"

Thousands of people around the country are praying for Cody. His mom, Jennifer Tracy, posted two photos of him seven months apart, saying this is what addiction does.

She hasn't heard from her son in weeks. Her post went viral.

27-year-old Cody is homeless in Las Vegas, which happens to be where Marshall County native Taylor Powell has found himself.

"I'm at a 7/11 here in Vegas. There's part of the strip right there," Powell showed us over FaceTime. "This part of Vegas is known as the naked city. It is a hub for heroin and meth users."

He's neither. Powell is traveling the country, living on the streets, and learning about homelessness. That's what he was doing when Tracy's post about her son was sent to him.

Tracy was updating her friends and family about her eldest son, Cody, describing his photos as "the face of heroin and meth." She writes "these pictures were taken seven months apart. That is how fast someone is affected."

Local 6's Leah Shields talked with Tracy over Facetime from her home in Missouri. "Everyone says well he hasn't hit rock bottom yet. Well maybe his rock bottom is not being alive anymore," Tracy worries.

Cody originally went to Vegas for 90 days of rehab. "He left there, and as he was living on his own. It didn't take long before he submitted back into addiction," his mom said.

He's now homeless there. His mom hasn't heard from him in weeks, and her Facebook posts asks him to contact her.

A photo from July shows what he looked like the last time she saw him. Now, Powell is on the search for Cody to save his life.

"Maybe that's why I'm here in Vegas. I don't know. I've been giving it my all," Powell said.

Powell said he doesn't know what he'll do if Cody refuses help. He said he's taking it one day at a time. As of Monday evening, the search is still on for Cody. Powell said he knows he's close by, because he has several people on the lookout for him and his girlfriend.

Cody's mom is holding out hope to see her son sober again. "It has been the hardest journey of my life. I don't want to say that. It's been horrible as a mother, but I can't imagine the journey he is on," Tracy said.

Powell has teamed up with a homeless outreach specialist in Vegas and a woman who has a car. They are all out searching for Cody.

We reached out to our NBC affiliate in Las Vegas, KSNV, and they are also reporting on the search for Cody.

You can read Cody's mom's Facebook post here. You can also follow Powell around on his journey across America and his search to find Cody here.

Tracy has also started raising money for Powell and two other people searching for her son. Powell and the others are living off the bare minimum and are running out of supplies. You can check out the fundraiser here.