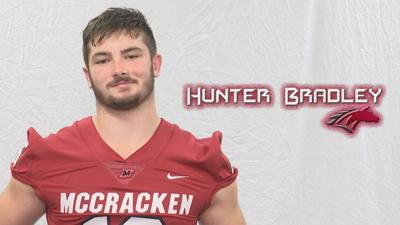 PADUCAH, KY -- Local high school football coaches voted McCracken County's Hunter Bradley as the #3 Player of Gridiron Glory in 2020. Here's what some of those coaches said about him:

Crittenden County's Sean Thompson: "The first thing that comes to mind when you say Hunter Bradley is he's a machine."

Murray's Keith Hodge: He's what you want out of a running back. Hard-nosed; downhill; reads his blocks really well. A kid you can give the ball 30 times a game to and have a lot of confidence in. He has a different mindset than a lot of players do. You can tell he's special, and he's going to have a heck of a senior year."

Fulton County's James Bridges: "Just watching him on film, on Fridays whenever you show highlights, just seeing him play, that kid can go."

Graves County's Nick Kemp: "That kid ran for a million miles on us last year. I don't even know. He was setting records against us. He's set to have a huge senior year. The kid is powerful. He's not scared of contact."

Paducah Tilghman's Jonathan Smith: "We got to see him, obviously, Game 1 last year. I'm a little disappointed we won't get to see him this year. Especially with him making the return to football he made after that injury he suffered late last season."