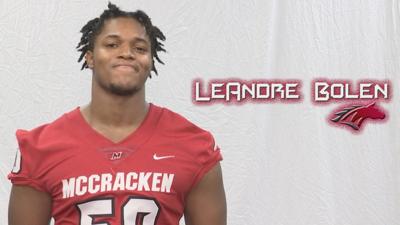 PADUCAH, KY -- Local high school football coaches voted McCracken County's LeAndre Bolen as the #7 Player of Gridiron Glory in 2020. Here's what some of those coaches said about him:

Paducah Tilghman's Jonathan Smith: "One of the things that we were fortunate about last year, is we got to see a lot of great defensive lineman. Obviously, in my opinion, the top in this end of the state is LeAndre Bolen from McCracken County. He’s one the most explosive, fast defensive lineman, by far, that we played last year. It’s been fun to watch him develop into who he’s still yet to become. The things he was able to do last year both in rushing the passer, and setting the edge in the run games, speaks extremely highly for what he’s capable of doing."

Mayfield's Joe Morris: "Great edge pass-rusher. Big, athletic guy that can force you to throw the ball quick. He gets off the ball so fast. He can get around the edge. As a coach, you don’t want your quarterback to get hit off the edge especially on his blind side, and that’s what he does. He gets his hands up. He gets to the quarterback. Great against the run. His motor is running all the time. Great defensive lineman."

Graves County's Nick Kemp: "Very fast, athletic kid. He’s big, got great size. He’s a hard kid to block. You’ve got to block him for four to five seconds, instead of two to three for a typical defensive lineman."