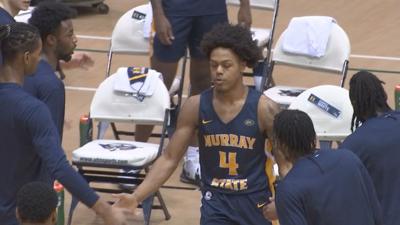 PADUCAH, KY -- As Matt McMahon continues to adjust his starting lineup, following a performance from freshman guard Dionte Bostick, he might have finally found something.

Bostick got his first start in a Racer uniform in Saturday's 79-57 win over UT Martin. At point guard, Bostick finished the game with 11 points, but had nine assists to just two turnovers.

"The number one priority for that position is to make everyone else around you better," said Racers head coach Matt McMahon. "I thought he did that today."

His 22 minutes of play was nearly equal to the time he had seen on the court all season in just three appearances. Most of those coming in mop up duty.

"Man, he has put in the work," McMahon said. "He is one of the first guys to the gym every morning. He has really picked up what we are trying to do offensively and defensively. He really earned the opportunity and I think he responded really well."

With his performance the Racers snapped a four game losing streak in the process. Murray State will now host Jacksonville State on Thursday night.