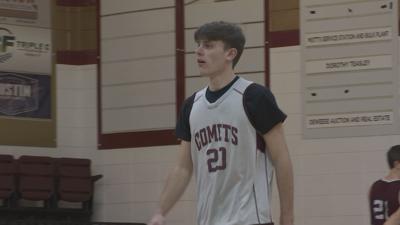 CUNNINGHAM, KY -- When you mention history and Kentucky high school basketball in the same sentence, you know you are talking about something big.

On Friday night, Carlisle County senior Garrett Hayden put his name in the record books by scoring 70 points in an 84-79 win over Paducah Tilghman.

"I am still in shock today," Hayden said. "I feel like I could have had 71, because I did miss a free throw, so I don't know. I just go out there and play and that is what I did and tell myself, take the next shot, and play."

Hayden became just the 18th player in Kentucky high school history to reach the 70 point mark, and the first since 2001.

"I don't think any of us really grasp what he did," Carlisle County head coach Brian O'Neill said. "I think it will sink in later on. You see 30's and 40's, but you just don't see 70 games."

Unlike other games where players score big numbers, Carlisle County needed every single one of Hayden's points. Carlisle County was down 15 heading into the 4th quarter against the Blue Tornado.

"I would say about the fourth quarter," Hayden said about realizing what he was doing. "I got up to the free throw line and the crowd was talking about 45, which is the school record. I knew at that time I had probably beaten it, then the whole fourth quarter I was just adding to it."

"I didn't realize how many points he had because we were all so into a close game," said Oniell. "In the flow of the game it was not noticeable because he was getting in everything through our offense."

In the end, Hayden finished 17-26 from the floor, with six three pointers made, and made 18 of 19 free throws. Not to mention led the team in rebounds with nine.

"One day, when I get older, I will look back on the record and its' definitely going to be a memory and really cool to share here with the County," said Hayden. "To have this moment with the County is great, and I appreciate the fans and the coaches that were there with me."