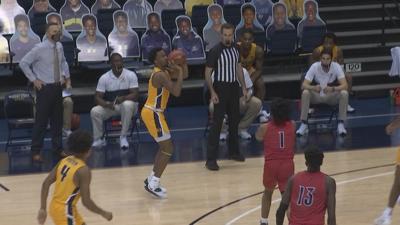 It was lost somewhat in the shuffle last Thursday night in the loss to Jacksonville State, but Murray State sophomore Chico Carter Jr. scored a career-high 21 points against the Gamecocks -- and he did all of that in the second half alone.

While it was a 20-minute flurry for Carter, it really symbolized his improvement from his freshman season, especially when it comes to scoring.

His two-point shooting is up 5 percent, while his three-point percentage is up 14 percent from last season.

Last year as a freshman, Carter spent most of his time as the team's point guard. This year, Murray State Head Coach Matt McMahon has been able to move Carter into more of a shooting guard role. That move has paid dividends. McMahon says Carter's biggest improvement this year may just be between his ears.

"I've really seen a change in Chico's mindset here in the last several weeks," McMahon said. "I think he's been working extremely hard. He's shot the ball well all season long. He's been our most consistent shooter, by far, this season. But I seem him really comfortable, really aggressive, attacking offensively. I think not having the pressure to create all the offense as far as running the team, I think has been a really good move for him."

Carter is shooting 52.5% percent from three-point range this season. That's the fourth-best percentage in the country for shooters with more than 40 three-point attempts.