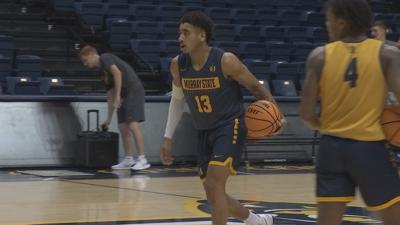 MURRAY, KY -- While his teammates were able to get on the floor for 'Racer Mania' and their exhibition game against Brescia, Murray State senior Carter Collins had to watch from the bench.

Collins suffered a minor ankle injury several weeks ago, which forced him to miss those opportunities at the CFSB Center.

However, Collins was cleared to practice just after that exhibition game and is set to start for the Racers in their season opener against Cumberland.

"It was hard," Collins said. "We got a really great group of competitive guys, high energy guys, and when we are on the court together, when we are together it is fun. It is fun to play together. So having to sit out and rest the ankle it was tough but got to stay locked in mentally and thankfully feeling better and ready to go tomorrow."

Murray State will host Cumberland at 7pm on Tuesday night at the CFSB Center.