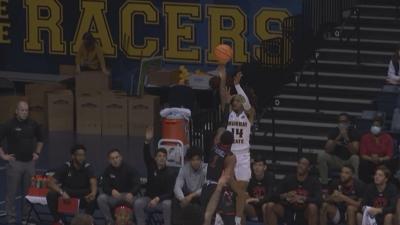 MURRAY, KY -- The Murray State Racers broke from the gate and never looked back in winning their 2021 Ohio Valley Conference opener 106-81 over the Southeast Missouri Redhawks at the CFSB Center in Murray, Kentucky.

Justice Hill topped his career-high in the first half alone with 22 points. His 26 points against SEMO topped the 20 he scored at Memphis (Dec. 10). KJ Williams notched his third double-double this season (19th of his career) with 21 points and 11 rebounds. Tevin Brown added 17 points and Trae Hannibal scored 15 points. Hill and Brown led the Racers with five assists each.

The hot hand belonged to Hill who made the first four 3-pointers he attempted to put the Racers in front 15-6 in the first 4:30 of the game. When Hill hit his fifth 3-pointer, the Racers pushed to a 15-point lead at 4:28. He hit his sixth long range jumper with 2:11 in the half and the Racers were in front 50-36. By the time the halftime intermission arrived, Hill had a new career-high of 22 points and the Racers led 59-40.