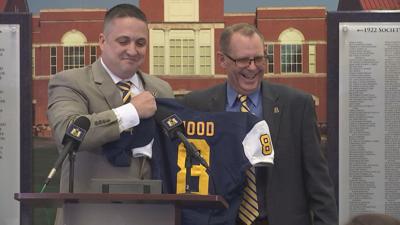 Murray State Head Football Coach Dean Hood first got into college coaching back in the mid-1980s. In those thirty-five years worth of experience on his resume, nowhere do you see any line items about how to run a program during a global pandemic. Yet here we are.

Hood is doing his best to navigate his program through these times, but it has been doubly challenging considering he is in his first year at Murray State.

Barely a month on the job, Hood had to scramble to get his first recruiting class all signed the first week of February. Then before spring practice could start, everything shut down. The pandemic has essentially put Hood's program in park, not only for players coming into the program, but for one's that are already there.

"Now with what's going on here, the same thing is continuing with next year's class," Hood said. "We had an opportunity to watch our guys lift weights and run around cones. We didn't have spring ball. You'd really like to see a football player play football before you evaluate them, and say this guy is good here or there and we need to sequester new guys in different spots. That's been the really challenging thing, not having the opportunity to know exactly what you have on your current roster."

Having spring practice canceled this year also slowed Hood's ability to get his team up to speed, and as he explained, that doesn't just apply to what happens on the field.

"Everything you're installing is new for the kids," Hood said. "Not only is it the new scheme, there's the hurdle of new coaching. This is how we coach, or this is how our linebacker coach coaches. There's a learning curve with relating to that. The flip side is also true. Kids are different. There's that lost opportunity of spring ball to figure out if this kid's a visual learner, or he's a kid that needs to have a walk-through; He's a kid that does well when you correct him a certain way, or doesn't do well. So you've lost all of that as well."

Murray State is scheduled to open the season September 5th at Georgia State.