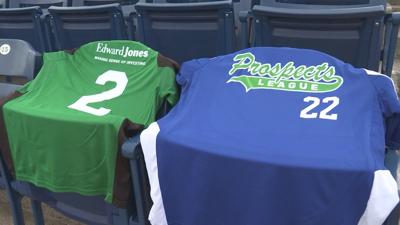 PADUCAH, KY -- Baseball is set to make its return to western Kentucky this coming Monday night.

It is all thanks to Paducah natives Kip Ellington and Bobby Riffe. Both have grown up around the game of baseball and have sons that play at the collegiate level.

Because of that, it was only natural when both started to think about an idea to give local college athletes the chance to get back on the field.

"We started thinking about all the local talent here and really said lets just send feelers out," Ellington said.

"Some of the players here, they turned down other summer leagues that were playing in Texas, Florida, or the Carolinas," Riffe said. "They turned those down because of what is going on. So we thought we could help them out."

That is when the Kentucky Prospects League was born.

"In three weeks we had almost 40 players signed up," Ellington said.

They joined forces with the Kentucky Prospects thanks to help from Riffe who has been a part of the youth baseball teams for several years.

"With us being a non profit and having the insurance in place made it an easy call to join together," he said.

In all, two teams will play twice a week, on Monday and Thursday nights at Brooks Stadium. Those games will last six weeks until a three game championship series will be played between the two.

"Summer is all about us getting reps, so with this coming up, it was a big deal for us," said Eric Riffe who is currently playing baseball at Western Kentucky.

Of course, there were hurdles they had to go through to get the league approved. Some of those included getting permission from the city of Paducah as well as getting it approved by the Brooks Stadium commission.

"We had to go through and make sure we had a plan in place," said Ellington. "We had to present that to the commission our play to keep every one safe and everything fell into place."

"That was enough for me to take it to our board," said Doc Hideg with Brooks Stadium. "We had six members present and all six members voted to support this."

One big question they had was if fans would be able to attend the games. According the Kentucky Governors office, that is a yes, as Brooks Stadium is allowed to hold fans up to 50 percent capacity for each game.

"It will look a little different from normal," said Ellington. "But we can still get several fans in here even with designated seating."

Which will provided some needed revenue for the stadium, that they otherwise would not have received without having any games played there this summer.

But in the end, making money isn't the main goal for this league.

"Kip and I exchange 50 emails and texts a day trying to get this thing going and at the end of the day it is what you are doing it for and doing it for the kids," said Riffe.

As for precautions surrounding the players and those participating, they have that covered as well. Before entering the stadium each day, every player, coach and official must get their temperatures taking as well as answering a series of questions.

Games will take place each Monday and Thursday night at 6:30pm at Brooks Stadium with gates opening at 5:00pm.