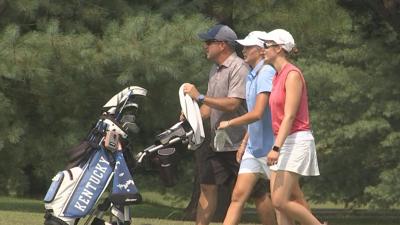 We are closing in on the one year since the passing Lyon County's Cullan Brown. The former high school state champion and University of Kentucky golfer died last August after a yearlong battle with cancer.

When Cullan passed away, the one common thing you heard over and over was that everyone who knew him said they'd never forget him. A year later, Kentucky's golfing community is proving that to be nothing short of a fact.

Thursday at Paxton Park is the first day of the second-annual Cullan Brown Invitational, an event put on by the Bluegrass Golf Tour. This is a two-day tournament, with the second round being played at the Calvert City Country Club. Junior golfers from across the state came to play in this event.

If we've learned anything in this last week, Cullan Brown's legacy in this state is strong and lasting.

"That's a testament to my boy and the impact he had on people," Cullan's mom Emily Brown said. "It's now our job to keep that going so people can hopefully share his love of the game and share his love of life, and his attitude toward life. That's what we hope happens."

Cullan's sister Cathryn shot a 1-under par 70 take a one-shot lead heading into tomorrow's final round.

For a complete look at today's leaderboard for the boys and girls, click here.