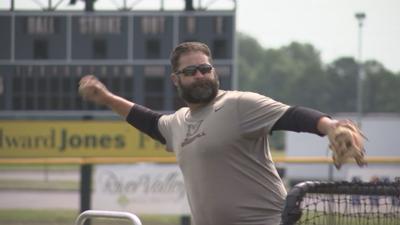 PADUCAH, KY -- The McCracken County Mustang baseball team are one of the thousands of teams across the country that hasn't been able to play, let alone get together.

So they had to get creative when trying to celebrate head coach Zach Hobbs birthday.

"I see the guys come up and start to throw baseballs in the yard," Hobbs said after seeing his players drive down his street. "All of those balls said happy birthday, miss you coach."

It was a simple gesture that those players could not pass up, while practicing social distancing at the same time.

"He is our guy," senior Elijah Wheat said. "We just love him and wanted to show him how much he meant to us."

"He comes in everyday 100 percent behind us," senior Grant Davis said. "He really appreciated it. You could tell that he was a little teary eyed."

Hobbs was supposed to begin his first season as head coach of the Mustangs this year, where expectations were a state championship or bust.

"We understand it is bigger than us," Hobbs said. "Not saying we should be playing. Everyone's safety is way more important, but my heart breaks for those guys."

"We all thought we had pieces to make another run and with all the things happening makes it hurt that much more," Wheat said.

To get through it, they are turning to Hobbs, who told them one thing once the season came to a stop.

"He told us we need to stay together and just communicate as well as possible and we have done that as a team," Davis said.

And as a team, that is what they wanted to celebrate their coach on his 40th birthday.

"Probably something that I will never forget," Hobbs said. "One of the coolest moments of my coaching career."