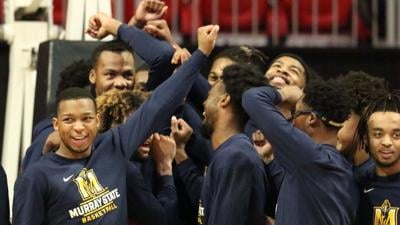 If you're looking for a fork-in-the-road moment this season for Matt McMahon's Murray State Racers, you can go back to January 7th. That night, the Racers dropped their fourth-straight game at Eastern Illinois.

After that loss, games with SIUE and Southeast Missouri State were postponed for COVID, giving Murray State a week-and-a-half of uninterrupted practice time. Since that break, the Racers have gone 4-2, with only a three-point loss to Jacksonville State and a one-point loss to Belmont.

Has it been perfect since that break? No, but it has certainly improved, and that was shown again Monday night in one of Murray State's best performances of the year with a 77-60 win over SEMO.

Now they head to the so-called "Death Valley" trip this week with Morehead State Thursday and Eastern Kentucky Saturday. The Racers lost to Morehead State on January 2nd 61-56 at home. One month later, that loss still gnaws at McMahon.

"That was one of the more disappointing games I've been involved in in my time here," McMahon said. "I thought Morehead State was terrific, but I thought they played a lot more inspired than we did with a lot of passion. Coach (Preston) Spradlin, man, what a great job he's done. They struggled for a couple years, but he stayed committed developing his program. He's got a really good basketball team. That was a long time ago. I think we're a different team since then, but they've kept getting better too. It's going to be a great challenge for us, but a quick turnaround with just one day of preparation. We'll have to make the most of it, go in there, and play with relentless effort and unselfishness for forty minutes, and see what we can get accomplished."

This trip to Morehead and EKU is a chance for some validation for the Racers that they have indeed turned the corner. Murray State is 5-6 in the OVC, in seventh place. They are 1-5 against the top six teams in the conference, but they have a golden opportunity to pick two more wins this week.