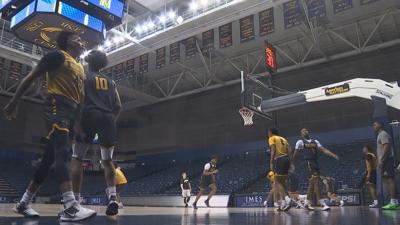 It's back to business as usual at Murray State, just 48 hours after the Racers clinched yet another Ohio Valley Conference regular season championship with their win over Austin Peay.

This week is OVC Tournament week. They say you want to be playing your best basketball in March, and fir Matt McMahon, this is what he saw out of his team in two wins last week.

"I think we are +32 in that 58-minute span from the time we were down six with 18 (minutes) to go against EKU on Thursday," McMahon said. "I said it after the game, I feel like that has been, the way we played those last 58 minutes, that has been the identity of this team, of the 2020 Racers."

The 2020 Racers believe thy are built for the tournament with five core players having already tasted success in recent years.

"We played a game at the Ford Center earlier this year against Evansville," McMahon said. "I think guys like KJ Williams, Tevin Brown, who have won games in the NCAA Tournament; Anthony Smith who played in the NCAA Tournament a couple of years ago. You hope those experiences help. I think that the leadership of our team has been very good going down the stretch and I expect that to carry over into tournament play."

Murray State will play in the OVC Tournament semifinals Friday night in Evansville.