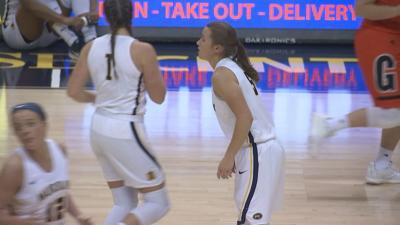 Murray State's women, 1-3 in the Ohio Valley Conference, will try to solve UT Martin Thursday night at the Elam Center. The Skyhawks are one of two remaining teams still unbeaten in OVC play. If the Racers are going to pick off the Skyhawks, they'll need a big game from sophomore Macey Turley.

Murray State Head Coach Rechelle Turner coached and Turley in high school and has seen her develop for close to a decade. Turner says Turley is a true point guard who wants to get everybody involved, but Turley has evolved as a player in college thanks to a request from her coach.

"I have asked her to turn into a score-first point guard," Turner said. "I think she had difficulty with that last year. I would say, 'You're not shooting the basketball enough.' 'But I'm shooting, but I'm shooting.'  'No, no, no, you're not shooting it enough. You're not seeking offense enough.' That's finally clicked this year. She seeks offense. She wants the pressure. She's accepting of the pressure. She wants to take the big shot. She'll take it on her back. That's the biggest jump that I've seen in her that maybe people that don't really know her don't understand. That was a big, big step for her because she is so unselfish, and I had to ask her to be a little more selfish."

Through four Ohio Valley Conference games, Turley has played more minutes than anybody in the OVC, while averaging 17.3 points, and 90.5% from the free throw line in conference games.