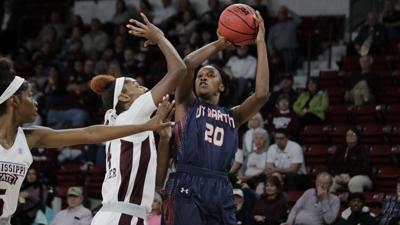 PADUCAH, KY -- Former UT Martin Skyhawk Chelsey Perry accomplished nearly everything she could during her four years with the Skyhawks, but now she is poised to do the same in the WNBA.

Perry was drafted in the 3rd round, 26th overall, by the Indiana Fever in last weeks WNBA Draft. She was the first Skyhawk player ever drafted.

"It is exciting just to be chosen or even mentioned in the draft," Perry said. "I am excited to be with the Indiana Fever."

Perry has already made her way to her new home town as she will quarantine throughout the next week before training camp begins on April 25th.

Its an opportunity that Perry has been preparing for her enter life, and says that her time playing with UT Martin in the OVC has prepared her for the next level.

"I don't want to come in entitled or anything because nothing is handed to you," she said. "That has always been my moto, is to be a competitor and just to work harder than everybody else and that is what has made me stand out in this league today. I just have to be myself and continue to play like I am capable for the coaches and be willing to play my role."