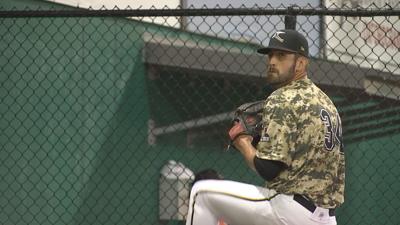 Whenever the Southern Illinois Miners get back to playing baseball, one of the biggest priorities for manager Mike Pinto is to make sure his pitching staff is ready to go. In the middle of this pandemic, that could be easier said than done.

We're just about to the time of year where the Miners would normally be starting spring training. Pinto says when his guys arrive for Day 1 of spring training, he wants his starting pitchers ready to go five innings and throw 75 pitches, and he wants his relievers able to throw on back-to-back days.

While that's always the goal, Pinto knows that may not be a reachable one right now.

"Right now we have guys that can't go anywhere," Pinto said. "They can't go to their gym and they're having to find a way. I think some guys are better than others. Some guys live in weather climates that allow them to work out better than others. I really believe that our league will have to allow us to have expanded rosters to start the season to allow us properly bring pitchers into shape. Because otherwise, frankly, we put them at risk, not only of them not being able to perform, but they can be injured because they aren't ready yet."

The Frontier League season was supposed to start on May 15th, but the start has been delayed indefinitely.