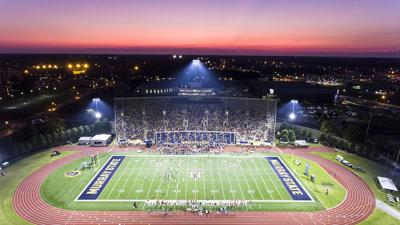 MURRAY, KY -- "I think most people would say that this in the most unique stretch of their lives," said Murray State Athletic Director Kevin Saal.

That statement from Kevin Saal has been echoed by nearly everyone across the country in athletic departments. Now, after months of having coaches and athletes away from each other, the Racers are ready to move forward into a new phase.

"We know more about our world that we did six weeks ago, six days ago," Saal said. "So we are constantly thinking, constantly contingency planning."

For Murray State, all of that led to the "Racer Restart Initiative," which was unveiled last week. For the athletics department, it is an eight point plan for a return that was put together with input from administrators, coaches, and public officials.

"I liken it to a football play book," Saal said of the return plan. "There may be 120 pages worth of plays and you may call 70 of those plays but we are prepared if the situation presents itself if you need to call a specific play."

"At the end of the day our ability to be disciplined with our masks, with proper hygiene, that is the true measure of success," said Saal.

That success will lead to all athletics starting on time. Which is currently the case for the 2020 Murray State football season.

"There hasn't been an adjustment in terms of the season and schedule," Saal said. "So we will open up September 5th at Georgia State then back at home against Tarleton State. We are planning and preparing for that."

Saal also added that any decision that is made by himself or the University will not be done in haste.

"We haven't been the most aggressive," he said. "Because we want to be thoughtful in our planning and diligent and have conversations with our student athletes and have a phased approach. Also, it will give us the most success as we return in the fall."

At the moment all football players are expected to be back on campus by July 15th, while men's and women's basketball will return by July 20th.

To look at the "Racer Restart Initiative," click here.