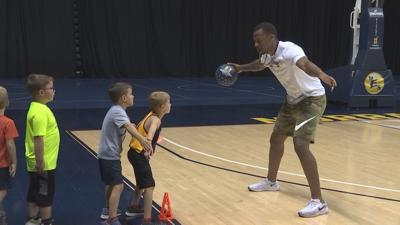 PADUCAH, KY -- Last years was anything but normal for the Murray State Racers on or off the basketball court.

But this week the Racers enjoyed something normal, in holding one of their annual Matt McMahon youth basketball camps at the CFSB Center.

"I think it is one of the very special parts of playing at Murray State," said McMahon. "That is one thing, especially during the pandemic, a lot of things that make this such a great place to play and coach, and such a special an unique program, were taken away. Getting back to the fan interaction, the ability to make an impact in the community is really important for our players and coaches."

This years camp set a record for attendance with over 60 kids ages 5-8 participating. The best part about the camp is that the Murray State players themselves help run the camps.

The next scheduled camp that the Racers will hold is set for June 21st-24th.