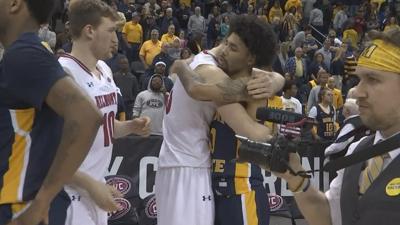 EVANSVILLE, Ind. (AP) - Tyler Scanlon scored 17 points including a layup with three seconds remaining to give top-seeded Belmont a 76-75 victory over second-seeded Murray State in the championship game of the Ohio Valley Conference tournament.

Nick Muszynski scored 25 points to lead the Bruins, and was named the tournament MVP.

Following timeouts from both teams, Kunkel passed the ball to Scanlon cutting under the basket for the game winner.