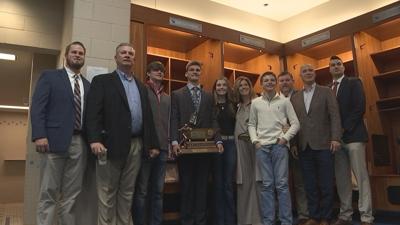 NASHVILLE, TN -- Coming into his senior season, Ty Simpson set several goals that he wanted to accomplish. One of those was winning a state championship with Westview, which they did this past weekend.

The other, was more of an individual goal, and on Tuesday afternoon at Nissan Stadium, Simpson was able to check off the final box of his high school football career by being named Mr. Football.

"This is an awesome day, a Cinderella story I feel like," said Simpson. "Winning a state championship on Saturday then winning Mr football on a Tuesday. Safe to say it is a pretty cool day."

Being named Mr. Football is the ultimate individual honor, but for Simpson, while he relishes the award, he believes others should have their names on it as well.

Simpson finished his high school career with 2,827 passing yards, ran for over one thousand yards, and accounted for 54 total touchdowns.

He was also named the Tennessee Gatorade Player of the Year on Tuesday morning.

Simpson will sign his letter of intent with Alabama next week, and will enroll early to start school in January.