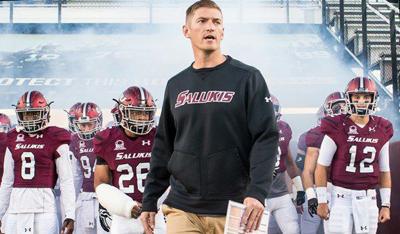 PADUCAH, KY -- A little over one month into the current pandemic that has swept across the nation and the world, sports have taken a backseat to saving lives and getting rid of the Coronavirus.

However, at some point, sports will return. But the question is, when?

President Donald Trump met with commissioners of the major sports leagues on Saturday afternoon to discuss several topics. Most of which is unknown, but Trump did say he sees the NFL beginning its season in September, on time, with fans.

But what about college football?

Many have began to weigh in on what they think may happen in four months when the season is supposed to begin. Some believe there will be a season, others a partial season, and some don't believe it will happen at all.

Southern Illinois head football coach Nick Hill is faced with what may happen in the future. But for him, that decision comes in the future as more pressing things are at the forefront.

"Whatever comes our way, we are just going to roll with it," Hill said. "We are going to listen to the people that know a lot more than I do, and are a lot smarter than I am. If that means that we are in a shortened season, the whole season, if there is no fans, all that. If we sit here and start concerning ourselves with that, I think that we will be worried about things that we have no idea what will look like. I am worried about today. I am trying to keep a positive attitude. I think we all need the perspective that things are not going to come back to normal. It is going to be different. No matter when we come back, it is going to be a little different and that is OK. Different could be better."

The Salukis and most other college football programs will report to campus for fall practice in late July or early August.