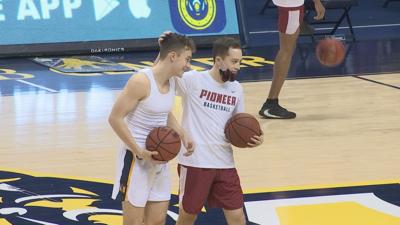 PADUCAH, KY -- It was a night to remember for brothers Will and Jackson as both of their teams faced each other on Tuesday night as Murray State defeated Transylvania 90-49.

Jackson, who is currently a freshman at Murray State, and Will, who is a senior at Transylvania, got a chance to play against each other for the first and only time at the collegiate level.

The Sivills brothers grew up in Murray, Kentucky and rooted for the Racers as their father, Scott Sivills, played for Murray State in the early 90's.

Will got the start for the Pioneers and finished the game with six points, an assist and rebound.

Jackson was able to get into the game during the second half and finished with eight points.

"Really to put words on it wouldn't do it justice because since Will graduated from McCracken three or four years ago I think we haven't had a chance besides playing pickup in the summer to play with or against each other," Jackson said. "It was surreal, I loved it. It was like playing in the backyard again.

"I mean this is something I am not going to ever forget for sure," said Will. "There are not many people that can come out and say that they played against their sibling, so that is something that I am going to remember."

Both Will and Jackson did play together at the high school level as both graduated from McCracken County.