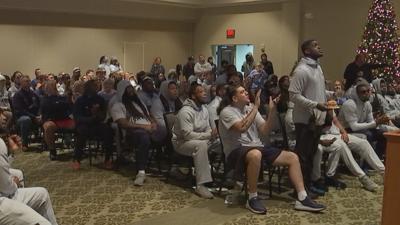 MARTIN, Tenn. - The defending Ohio Valley Conference regular season champion University of Tennessee at Martin football team will continue its season with participation in the 2021 NCAA Division I Football Championship with a first round matchup against Missouri Valley Football Conference foe Missouri State on Saturday, Nov. 27. Kickoff from Robert W. Plaster Stadium in Springfield, Mo. is scheduled for 3 p.m.

The Skyhawks (9-2) enter the postseason currently ranked eighth nationally after winning the OVC league title for the second time in program history. UT Martin has qualified for the postseason twice in school history – joining the team’s NCAA Playoff run in 2006.

UT Martin won a program record nine straight games – ranking as the second-longest winning streak in the country. The team’s nine-win season is the fourth in the program’s 92-year history and one of only five FCS programs to go undefeated against division opponents through the first 10 games of the season.

Missouri State is ranked 14th nationally with an 8-3 record while going 6-2 in the MVFC to finish as the league runner up. The Bears will be making their second straight NCAA Playoff appearance and fourth overall after previous trips in 1989, 1990 and the spring of 2021.

The 2021 NCAA Division I Football Championship field is comprised of 24 teams which includes 11 automatic bids and 13 at-large berths. There are eight first round matchups (16 total teams), while eight teams receive a bye into the second round. The first round will be played on the weekend of Nov. 26-27 with the second round to follow on Dec. 3-4. For the 13th time in 2021, the championship game will be played in Frisco, Texas at Toyota Stadium.