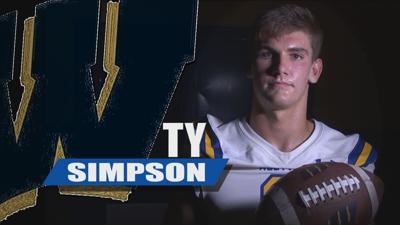 Local coaches voted Martin Westview senior quarterback Ty Simpson as the #1 Player of Gridiron Glory in 2021. Here's what they had to say about him:

Lake County's Cory Quinn: "You don't get a ride to Alabama unless you're a very gifted individual. He's got an absolute whip for an arm. The second thing is his ability to extend plays and he breaks the pocket and he can hurt you with his legs.

McCracken County's Marc Clark: "You know, he's got it all. I mean, he's everything that you want in that position. I don't know that we've seen a player in this area that good."

Caldwell Couny's Will Barnes: "From what I've seen, everything you look for in a quarterback. He's got a great arm, seems very calm and collected in the pocket.

Paducah Tilghman's Sean Thompson: He's a dual threat guy that can really sling it. Um, for me what he reminds me of his Elijah Sindelar kid who used to extend plays and throw and throw it down the field and use that cannon. It's nice having players like that close to this area that get that much attention, You know, bringing attention to this area of the United States. You know, football is real in this area."

Dresden's Keith Hodge: "He's so elusive. I think it's the thing that makes him very special as he's so hard to get to. He sees the field while he's on the move. This is as good as any high school quarterback I've ever seen. Contain is big against him, but I just haven't seen anybody really do a good job of containing him yet."

Union City's Nick Markle: "He's got arm talent and sometimes you can't coach arm talent. You know, I've seen him roll out to his weak side and throw the thing 60 yards down the field."

Mayfield's Joe Morris: "When he gets in trouble, I think one thing is how mobile he is. They run him a lot and he scrambles and makes plays with his legs and man, he's just a fantastic quarterback, a great talent and a great kid."