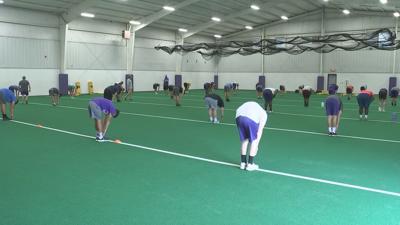 The Union City Golden Tornadoes football team was one of the first to take advantage of the new guidelines put in by the TSSAA.

"I have been dreaming about getting back on the field," Union City senior Neil Brown said. "It has been boring inside."

After two months away, the Golden Tornadoes have now been back together for three weeks.

"Coming off of this, we want to come out and do our best to the best that we can be," senior Wes Tilghman said.

For first year head coach Nick Markle, it hasn't been the ideal start he had hoped for when he took over for longtime head coach Darren Bowling earlier this year.

"I worked in the school for four days before the school was shut down," he said. "Getting back has helped us get the guys back to some normalcy in their lives and give them some type of routine."

That routine now comes with new social distancing guidelines that each school must complete before workouts or practice can begin.

"We have to get their temperatures, log that in, and if it is a certain degree they have to be sent home," Markle said. "They have to bring their own water everyday as well."

Markle has also had to spread his team out into smaller groups as no more than ten players can be together at the same time.

It is all part of a new normal for high school athletics. However, for the Union City players, the new steps don't seem to bother them.

"I like that we have it, because we are being cautious," Tilghman said. "It is just part of it and we are rolling with the punches."

"It is needed," said Brown. "I am once again just glad to be back on the field no matter what."

For Markle, it has shown him how much his new team loves the game, as nearly every player on the 44 man roster has participated in these practices.

"It is not mandatory," he said. "There is no punishment. There is nothing to hold over their heads, but they are here everyday."